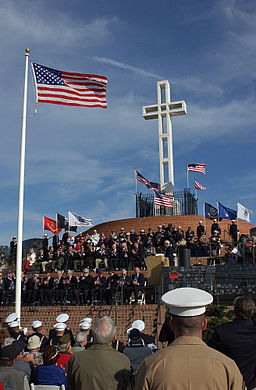 The Obama administration told the Supreme Court on Monday that it objects strongly to a federal judge’s order that would require the government to take down a Christian cross that stands on a hill above San Diego, but said the Court should not get involved in the controversy until there is a final ruling in lower courts.

When the proper time comes, the new brief said, the government will ask the Justices to overrule a ruling by the U.S. Court of Appeals for the Ninth Circuit more than three years ago that the Mount Soledad cross represents a violation of the Constitution’s religion clause.  It was in reaction to the Ninth Circuit’s ruling that a federal judge reluctantly ruled last December that the cross had to come down, as “the only remedy” for that violation.  The judge’s order is on hold for the time being

Defenders of the cross have asked the Court to step in now, without waiting for the Ninth Circuit’s further review, and overturn the Circuit Court’s decision and, with it, the judge’s order to remove the Mount Soledad monument.  That is the request the Obama administration refused to support at this time, in the case of Mount Soledad Memorial Association v. Trunk.

The cross, twenty-nine feet tall and standing on a fourteen-foot base, is on the hill known as Mount Soledad.  It has been there since 1954, but it has been the center of constitutional controversy for twenty-five years.  The dispute has been to the Supreme Court twice, but now is awaiting an appeal to the Ninth Circuit over the monument’s ultimate fate.

The Supreme Court refused in June 2012 to hear a challenge to the Ninth Circuit ruling against the monument, but the case was not yet final because the federal judge had not determined what remedy should be imposed.  At that time, Justice Samuel A. Alito, Jr., wrote a separate opinion stressing the importance of the issue, but agreeing with the Court that review was premature at that point.

The same association which pursued that earlier appeal is now pressing the Court to act immediately on the case.  “Further proceedings in the Ninth Circuit,” the new petition said, “would not only be fruitless, but the resulting delay may even be harmful.  As long as the Ninth Circuit’s decision stands, it puts into question the legality of hundreds, if not thousands, of veterans’ memorials across the country.”

It added: “Even though the district court stayed its order, the specter of the memorial cross being torn down looms large over the Memorial, the city of San Diego, and Americans veterans of all wars.”

The federal government also has become a defender of the cross, since Congress in 2004 designated the cross and its memorial status as a national memorial for veterans, and then, in 2006, took title to the memorial itself to preserve it.

The new government brief said the defenders were right, that the Ninth Circuit decision erred and its decision “should not be permitted to stand.”  The ruling, the filing added, “effectively invalidates an act of Congress,” and also contradicts Supreme Court rulings and adds to confusion in the lower courts over “how to apply the Establishment Clause to public displays.”  Taking down the monument, it said, would “unnecessarily foster
religious division.”

Even so, the brief said, the Supreme Court should not undertake now to review the controversy.  The district court judge’s stay of his order to take down the cross remains in force, the government noted.  As long as that is so, “this case can proceed along the usual [appeal] course [in the Ninth Circuit] without causing immediate harm to the public interest.”

But, it added:  “To be clear, the United States continues to believe that this case raises an issue of great public importance.”  If the order to remove the cross is upheld by the Ninth Circuit, “the government expects” to file its own appeal to the Supreme Court, it said.