The Supreme Court pressed ahead on Wednesday with the majority’s constitutional view that more money flowing into politics is a good thing — even if much of it comes from rich donors.  By a five-to-four vote, the Court struck down the two-year ceilings that Congress has imposed on an individual’s donations to presidential and congressional candidates, parties and some — but not all — political action groups. 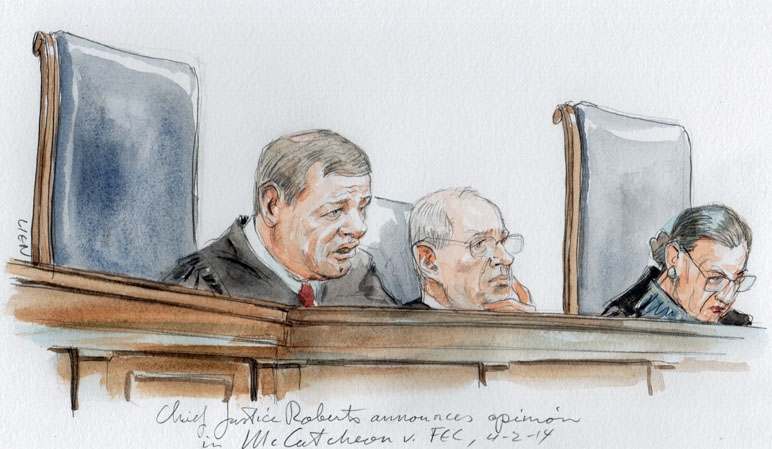 The main opinion delivered by Chief Justice John G. Roberts, Jr., said confidently that corruption in politics will be kept in check by caps — left intact — on how much each single donation can be.  Removing the ceilings on the total amounts that may given in each election cycle will not undermine those limits, Roberts predicted.

The decision was not as sweeping as the Court’s ruling four years ago, removing all restrictions on what corporations and labor unions can spend of their own money in federal campaigns (Citizens United v. Federal Election Commission), which has led to billions of dollars spent on politics through financing that is supposed to be independent of candidates or parties.  The new ruling leaves that option open if a donor does not want to directly support a candidate or a party committee and stay within the per-donation caps.

Even so, the practical result of the new ruling is almost sure to be that wealthy individuals favoring specific candidates or party positions will be able to spread their money around among more candidates and political groups.

Donors will get into legal trouble, the ruling emphasized, only if they demand a specific favor in policy or legislation in a direct exchange for the money they give.  That is the only kind of corruption that the First Amendment will allow the government to attack, the decision stressed.

The Chief Justice’s opinion said that other recent changes in campaign finance law will work to reduce the risks of abuse, and it offered several other ideas for new limits that it implied might be constitutional. Whether the votes are there in Congress to pass any of those suggestions is problematic.

Although the Roberts opinion spoke only for himself and three other Justices, Justice Clarence Thomas said he agreed with the result, making a majority for eliminating the two-year ceilings.  Thomas said he would have gone even further to free up even more donations in federal campaigns.  He would have overruled a 1976 decision (Buckley v. Valeo) that gives contributions less constitutional protection than spending during campaigns.  He added, though, that the Roberts opinion “continues to chip away” at the 1976 decision’s foundations.

The Roberts opinion was supported in full by Justices Samuel A. Alito, Jr., Anthony M. Kennedy, and Antonin Scalia.  Justice Stephen G. Breyer wrote for the dissenters, and orally announced the dissenters’ reasoning in a presentation that ran longer than the Chief Justice’s announcement of the ruling.  Breyer’s opinion was joined by Justices Ruth Bader Ginsburg, Elena Kagan, and Sonia Sotomayor. 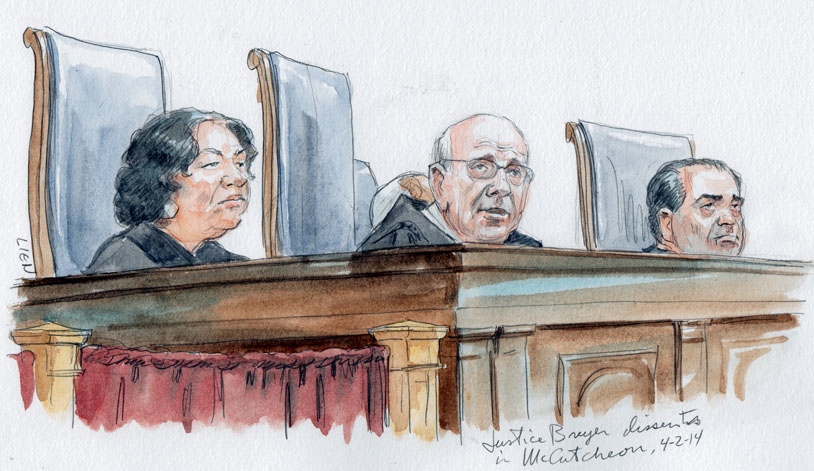 The ruling will go into effect, formally, in twenty-five days unless the Court were to take the rare step of agreeing to reconsider it.  Thus, it seems sure to operate through the months remaining in this year’s congressional campaigns, and for the presidential campaign in 2016, likely to begin in 2015 if not before.  The ruling applies directly to federal elections, because the case centered on a federal law.  However, eight states have similar ceilings on total contributions, so those, too, may be affected by the constitutional ruling.

These so-called “aggregate limits,” Chief Justice Roberts remarked, “have the effect of restricting how many candidates or committees the donor may support, to the extent permitted by the base limits.”

The ruling came in the case of an Alabama businessman, Shaun McCutcheon, who sued (along with the Republican National Committee) because the two-year limits stopped him from giving anything to added candidates or political panels once his donations had reached the ceilings.  He said he had no objection to keeping each specific donation within the so-called “base limits.”  Curbing the number of candidates he could support, he and the GOP argued, infringed on his right to engage in political expression.

Although the Court did not concede that it was creating constitutional donation opportunities only for the wealthy, the two-year caps as a practical reality probably would never apply to those with more limited financial means.

In fact, the main opinion impliedly referred to big-money donors by remarking that “the government may not penalize an individual for robustly exercising his First Amendment rights” — and cited for that notion a ruling it had made six years ago striking down a limit on millionaire candidates who used their own money to pay for their own campaigns for Congress.