Argument analysis: How wrong was the Eleventh Circuit about the First Amendment protections for a public employee’s subpoenaed testimony?

The Eleventh Circuit’s brief per curiam opinion in Lane v. Franks held that Edward Lane, an employee at a community college program, had no First Amendment protection for his subpoenaed testimony.  In oral argument, there was little support for that conclusion.  Only one of the four advocates argued for unqualified affirmance, and none of the Justices seemed inclined to fully embrace the Eleventh Circuit’s determination.

But how completely will the Eleventh Circuit’s decision be reversed?  The contours of any correction pose two major issues.

First, there is the problem of the breadth of a resulting First Amendment rule.  It would be difficult to find more sympathetic facts for the protection of a public employee.  After Edward Lane became the director of a program for at-risk youth at Central Alabama Community College (CACC), he looked at the program’s finances and soon discovered a state representative was on the payroll.  He also discovered she had never done any work for the program.  His superiors, including an attorney for the college, advised him to let well enough alone.  But he terminated the state representative when she refused to show for work; she vowed to retaliate.  She was eventually indicted and Lane testified before a federal grand jury and — pursuant to a subpoena – at her two federal criminal trials for mail fraud and fraud involving a program receiving federal funds.  He was terminated between the two trials.

While Lane seems a stellar employee, as the Alabama Attorney General Luther Strange all but admitted, there were concerns about other employees who might be protected by a bright-line rule protecting testimony.  What if the employee is a lab technician who testifies as part of his job duties?  Can the employer discipline him if the employee cannot perform this part of his job?  Or if, as Justice Sotomayor asked, the employee “comes to court dressed in a clown suit”?  Should the subpoena be the deciding factor?  Arguing for Edward Lane, Tejinder Singh suggested a narrow holding that essentially reasserted Garcetti v. Ceballos and Pickering v. Board of Education, subject only to the clarification that even when a public employee’s testimony “describes facts that the employee learned in the course of his employment, it’s still protected.”  Singh did articulate the “strong version of the First Amendment” rule that would protect testimony based on a “separate and superior obligation to testify truthfully to the court,” but he made clear he did not advocate its adoption.  Deputy Solicitor General Ian Gershengorn, appearing on behalf of the federal government as an amicus, argued that such a broad rule would intrude on the government’s ability to supervise its own employees, especially those who testified as part of their employment. 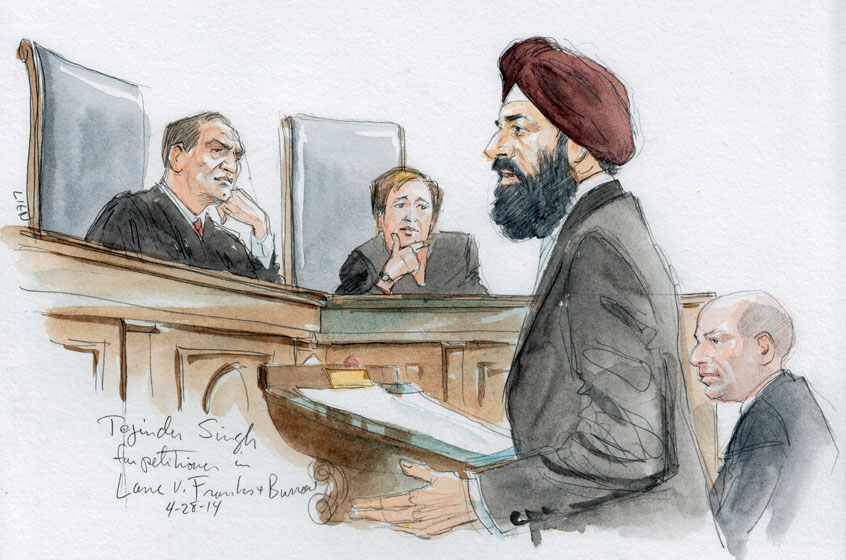 Importantly, the balancing required by Pickering includes weighing the government employer’s interest, even if it is citizen speech on a matter of public concern.  The lower courts had stopped short of this balancing because they considered Lane’s testimony to be in the course of his employment.  But in the argument, this final balancing requirement surfaced several times.  Singh used it as the answer to the “clown costume” hypothetical.   Gershengorn seemed less satisfied by Pickering balancing as a solution, even when pressed by Justices Kagan, Kennedy, and Sotomayor.

But Mark Waggoner, arguing on behalf of Steve Franks, the former president of the college who was sued in his individual capacity, contended that public employees who know that someone “has a no-show job” would not even be entitled to Pickering balancing should he write a letter to the editor or testify under subpoena. First Amendment protections, Waggoner argued, extend to opinions and viewpoints and not to facts.  The Chief Justice and Justices Alito, Scalia, Ginsburg, and Kagan all seemed disinclined to accept that view. 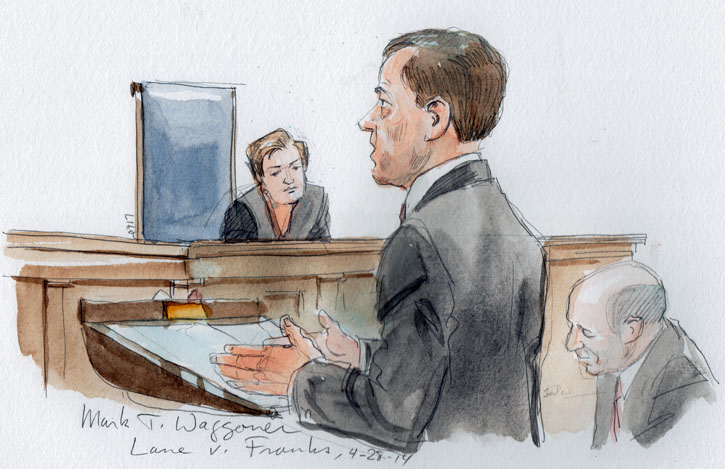 The second problem — qualified immunity for Steve Franks — was barely broached in Waggoner’s argument, but Gershengorn and Strange both argued that Franks is entitled to qualified immunity because he did not violate a right clearly established by law at the time he terminated Edward Lane.   Although there was specific discussion of Eleventh Circuit cases, the best argument in support of the position that Franks did not violate a clearly established right is the Eleventh Circuit opinion in Lane v. Franks itself.  As Chief Justice Roberts phrased it to Singh, Lane’s argument would essentially require Franks, the president of the college who terminated Lane, to “be a better analyzer of Supreme Court precedent than the three Eleventh Circuit judges.”

The status of the Eleventh Circuit’s opinion in Lane v. Franks as per curiam and non-precedential, and decided on the non-oral argument calendar, was never made explicit, but it might be influential on the question of whether the qualified immunity question should be remanded.  The Eleventh Circuit panel did resolve the qualified immunity issue, but only in a footnote, and as a logical corollary of its decision that there was no First Amendment protection.  Several Justices wondered why the Eleventh Circuit should not have the opportunity to carefully (re)consider its own precedents, as well as the correct application of Garcetti.  Yet this would mean that the Eleventh Circuit judges would have to determine they had been as wrong as wrong could be.  Or maybe they simply repeated an earlier mistake, and being doubly wrong would mean the law was not clearly established in Lane’s favor.

It does seem clear that the Eleventh Circuit was wrong in this case.  But how the Court will attempt to prevent future wrongs by articulating a new rule and how the Court will remedy the past wrong by deciding the issue of qualified immunity is much murkier.

[Disclosure: Goldstein & Russell, P.C., whose attorneys contribute to this blog in various capacities, serves as counsel to the petitioner in this case. However, the author of this post is not affiliated with the firm.]