After two hours of oral arguments in Riley v. California and United States v. Wurie, both of which involve challenges to the search of an arrestee’s cellphone without a warrant, it seemed likely that the Justices are headed for some sort of middle ground:  there did not seem to be five votes for either the government’s bright-line rule – that police never need to get a warrant to search a cellphone – or its polar opposite, which would always require a warrant.  But exactly what that middle ground might be and what it might mean for David Riley and Brima Wurie, the defendants in this case, were far less clear.  Let’s talk about the arguments in Plain English. 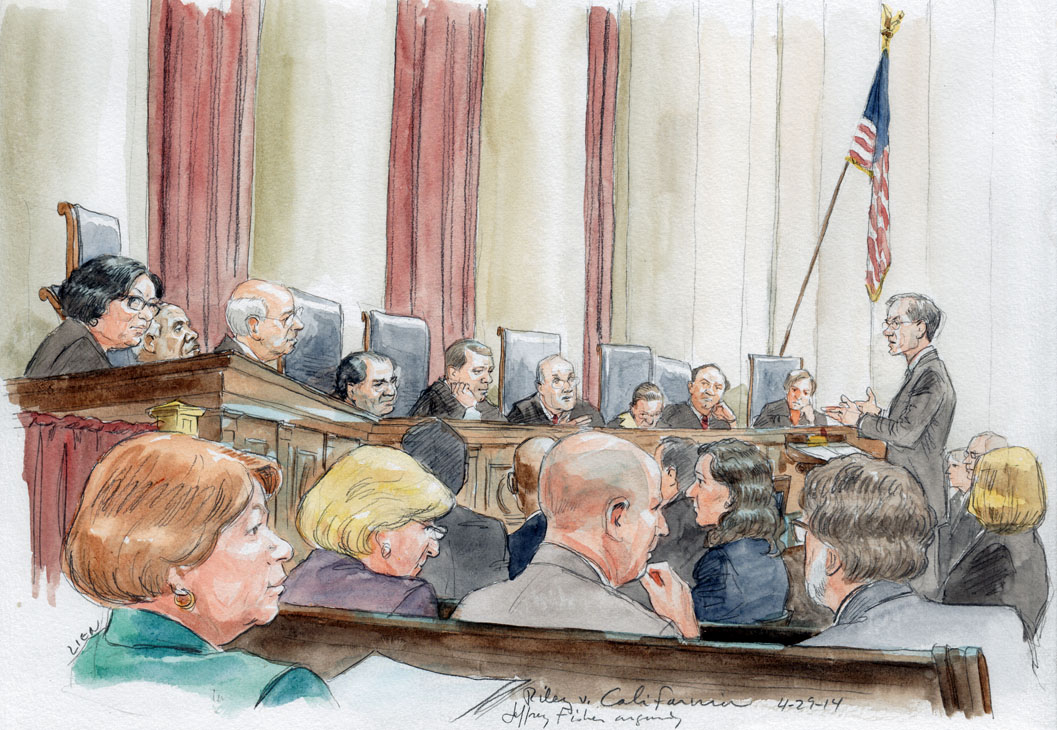 Going into the oral argument, both California and the federal government told the Court that, whenever police make an arrest, cellphones should be fair game for a search for all of the same reasons that police can search, for example, the arrestee’s wallet without a warrant.  But it’s hard to see five Justices voting in support of that rule, given the widespread skepticism that the argument met on the Court.  Justice Elena Kagan was one of the most vocal opponents of such a rule, telling California Solicitor General Edward DuMont that, following his logic, an arrest for a minor offense like driving without a seatbelt would allow police to look at every single e-mail on the arrestee’s phone, along with his bank records, medical data, calendar, and GPS data.  That, she suggested, “strikes me as a very different kind of world” from looking at someone’s billfold, given that “people carry their entire lives on cellphones.”  Justice Antonin Scalia later echoed this idea, calling it “absurd” that police should be able to search someone’s iPhone for that kind of minor offense.  Justice Anthony Kennedy, whom many often regard as a key vote on the Court, expressed concerns as well, telling Deputy U.S. Solicitor General Michael Dreeben (who argued on behalf of the federal government in both cases today) that “we are living in a new world,” in which someone arrested for a minor crime has her “whole life on [her] phone” and asking whether Dreeben could suggest some limits on the potentially broad sweep of the government’s rule.

But even if California and the federal government seem unlikely to win outright, the chances that the Court will require police officers to get a warrant whenever they want to search an arrestee’s phone appear even slimmer.  Although (as the previous paragraph indicates) virtually all of the Justices were keenly aware that cellphones are unique insofar as they contain large amounts of personal information, they were equally mindful that – as Justice Kennedy observed – criminals also rely on cellphones to facilitate their dirty work.  And the Justices may be reluctant to hamstring efforts by law enforcement officials to fight and investigate crime.  Dreeben seized on this concern, repeatedly pushing back against the suggestion that police could always go get a warrant and then search the phone once they obtained it.  He spent much of his half-hour at the lectern during the Wurie argument describing the benefits that could come from an immediate search of a cellphone – such as learning of a plan by the arrestee’s confederates to ambush police – and warning the Court that, if police have to delay a search to go get a warrant, sophisticated encryption technology can kick in and make the data on the phone “useless,” possibly for months.

Given the lack of support for either bright-line rule, it comes as no surprise that the Justices spent a good chunk of the two hours today mulling over a possible middle ground.  But here too there wasn’t much in the way of consensus, as the Court struggled to find a compromise that would genuinely protect privacy.  DuMont and Justice Alito, for example, suggested that a warrant should not be required as long as police are only looking at information – like a photograph – that is analogous to something that police could have searched in the pre-digital era.  But Justice Kagan objected that such a rule would actually exclude very little, noting that almost everything on a cellphone “could be reduced to a piece of paper.”  And Justice Stephen Breyer similarly noted that there is very little data on cellphones that wouldn’t have an analog from the pre-digital era, telling DuMont that the real problem is the quantity of data found on modern cellphones, which far outweighs the quantity of papers and photos that most people would carry around with them.

Having seen the lay of the land, Michael Dreeben offered another potential compromise to address the Justices’ concerns that an arrest for a minor crime like jaywalking could subject the entire contents of the arrestee’s cellphone to search:  police can search cellphones without a warrant, but only for evidence that would be relevant to the crime for which the defendant is being arrested.  And, he submitted, the Court could add the further limit that police can only look for that evidence in the parts of the cellphone where they are likely to find it.  But Chief Justice John Roberts (among others) was dubious that such a rule would actually impose any real limits:  in that scenario, he asked Dreeben, what wouldn’t police be able to look at?

And Justice Anthony Kennedy proposed yet another possible middle ground:  whether police can search an arrestee’s cellphone without a warrant would depend on whether the crime for which the individual was arrested was a serious or non-serious offense.   Having made that suggestion, though, Kennedy himself immediately expressed doubt about whether the Court’s cases would support a distinction between serious and non-serious offenses.

So the Justices appear to have their work cut out for them to come up with a ruling that will garner at least five votes.  And, depending on what they decide, their ruling could lead to different outcomes for Riley and Wurie:  for example, most Justices seemed unconvinced that the more limited search of Wurie’s older “flip” phone had really invaded his privacy.  And just to keep things even more interesting, the Court is on the clock for this one, with almost exactly two months – during which the Justices will be busy working on other high-profile opinions as well – to draft and finalize a decision before the Court’s summer recess.  We’ll be back at the end of June to cover it in Plain English.