As quick off the mark as usual, Justice Scalia’s unanimous opinion for the Court in Law v. Siegel was the Court’s first opinion from the January argument calendar and his fourth opinion (more than any other Justice) of the 2013 Term. 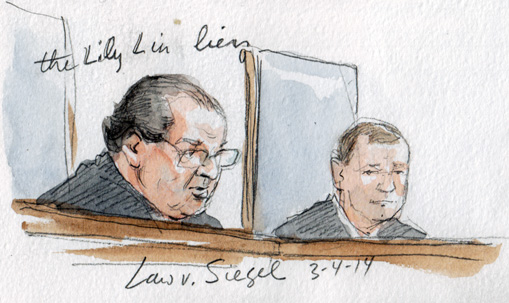 The case involves a bankrupt (Law) who tried to keep money from his creditors by claiming that his home was subject to a fictional lien.  Law’s activity in support of this fiction was remarkable; as the Court’s opinion notes, it extended (according to the courts below) to the filing of fictitious pleadings that he forged in the name of the fictitious lienholder.  By the end of the day, the trustee in the bankruptcy proceeding (Siegel) spent several hundred thousand dollars proving that Law’s claim was wholly fabricated. Outraged by the conduct, the bankruptcy court (following established Ninth Circuit precedent) held that the trustee could collect the expenses of that litigation out of the funds Law received from the sale of his homestead. Ordinarily, those funds would have been exempt under California’s homestead exemption (which differs in no material way from the homestead exemptions of every other state).

My posts on the briefs and on the argument suggested that the case presented the Justices with a stark choice between applying the plain language of the Bankruptcy Code (which would require it to reverse the Ninth Circuit), and giving in to the understandable impulse to affirm the capacity of the bankruptcy courts to dole out stern punishment for the remarkably deplorable conduct at issue here. The quick and unanimous reversal suggests that the Justices whose comments at the argument expressed so much outrage at Law’s conduct could not, on reflection, find a colorable basis for upholding the Ninth Circuit.

The Court’s brisk and workmanlike statutory analysis reads like the answer a talented student would give to a relatively simple exam question. The absence of qualifications or quibbles in its description of the relevant principles make it just the kind of opinion that is likely to be cited frequently in future briefs to the Court. The basic argument for punishing Law is that Bankruptcy Code § 105’s grant of general authority to “issue any order . . . that is necessary or appropriate to carry out the provisions of [the Bankruptcy Code]” is so general that it should be read to permit the sanction imposed in this case.  The fundamental problem, which Siegel could not overcome, is that the Code could hardly be any clearer in stating that bankruptcy courts cannot take exempt property (the proceeds of Law’s homestead) to fund administrative expenses (like the trustee’s litigation costs). Because the Court concluded that the order in question “contravened” the exemption rules, the Court found the order impermissible.

Nor did the Court find any substantial merit in the idea that the bankruptcy court has inherent power to deny an exemption as a sanction for misconduct.  For one thing, the courts in this case didn’t in fact deny the exemption – they granted the exemption and then “surcharged” it (the Ninth Circuit’s euphemism for confiscation). But more generally (and this part of the opinion probably will make it into future casebooks), the Court denied bankruptcy courts any authority to “withhold exemptions based on whatever considerations they deem appropriate.”  The “Code’s meticulous—not to say mind-numbingly detailed—enumeration of exemptions confirms that courts are not authorized to create additional exemptions.”

Finally, the Court rejected Siegel’s reliance (seconded by the United States Trustee) on its 2007 decision in Marrama v. Citizens Bank.  To be sure, the Marrama Court did have to work very hard to find a statutory basis for refusing to allow the debtor in that case to convert a bankruptcy case from Chapter 7 to Chapter 13. The easy answer for Justice Scalia would have been that he dissented from Marrama’s creative statutory construction in the first place.  But of course, with Justices Kennedy, Ginsburg, and Breyer still on the Court from the Marrama majority, he couldn’t get a unanimous Court for that explanation. So instead he summarized the statutory analysis of Marrama as colorable on its own facts but not so untethered to reality as to justify the statutory distortion that would be necessary to affirm the Ninth Circuit.

It’s a refreshingly reassuring experience to read an opinion for a unanimous Court that blithely upholds a result that most of the Justices must find distasteful. It just goes to show, even to the cynical, that legal rules, in fact, every now and then, constrain the Justices’ actions.

PLAIN LANGUAGE: When someone files for bankruptcy, ordinarily the courts cannot take the individual’s home, because it is “exempt” from the bankruptcy.  The Court in this case held that the home remains exempt even if the individual’s flagrantly deceptive conduct results in hundreds of thousands of dollars of litigation.