We are happy to present the first edition of the Stat Pack for October Term 2013. This year’s Stat Pack includes some features typical of our Stat Packs, such as the Circuit Scorecard, Frequency in the Majority tables, and Justice Agreement tables. It introduces two new tables: one that records the number of grants per conference, and another that records the number of opinions per week. This edition of the Stat Pack also introduces enhanced statistics related to advocates who have argued before the Court during OT13.

You can find additional analysis of the Term’s opinions, oral arguments, and advocates below. 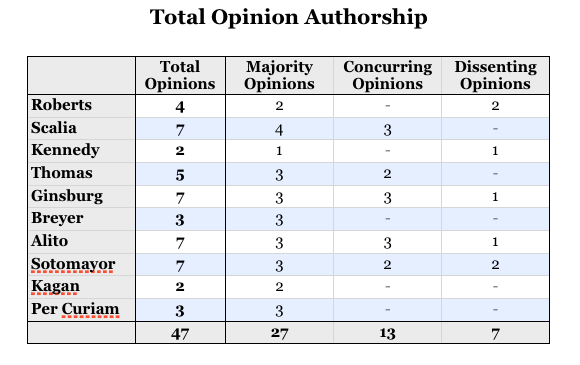 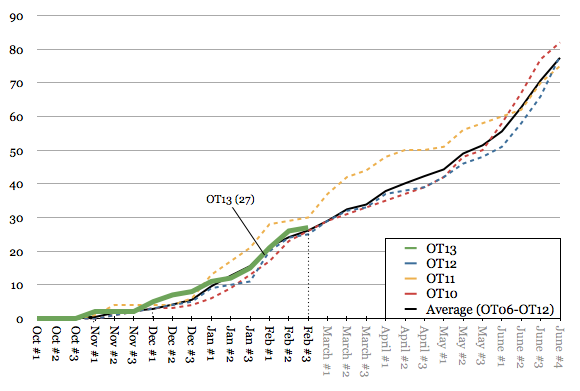 Frequency in the Majority: Justice Scalia has been in the majority more often than any of his colleagues, siding with the majority in every case through the first twenty-seven opinions of the Term. Justice Kennedy, who is frequently the Justice most likely to be in the majority over the course of an entire Term, has dissented in three cases, which is somewhat surprising given that there have only been seven divided cases during the Term.

Circuit Scorecard: The seventy-one merits cases for the Term hail from each of the eleven geographic circuits, the D.C. and Federal Circuits, five states, and one three-judge district court panel. Although in recent years the Ninth Circuit has often provided the greatest number of merits cases for a given Term, for the first time in several years it may have to share that title with the Sixth Circuit, which like the Ninth has eleven cases on the merits docket this Term. However, in recent years, the Ninth and Sixth Circuits have been the two circuits most likely to see their cases reversed by a summary reversal, so their total number of appearances on the merits docket may shift as summary reversals are released between now and the end of June.