Argument analysis: Why not take the simple route?

When Justice Antonin Scalia offers a lawyer before the Supreme Court two simple ways to win a case, and makes it clear he is very devoted to both, it may be smart to resist one, but is there some risk in not embracing either? 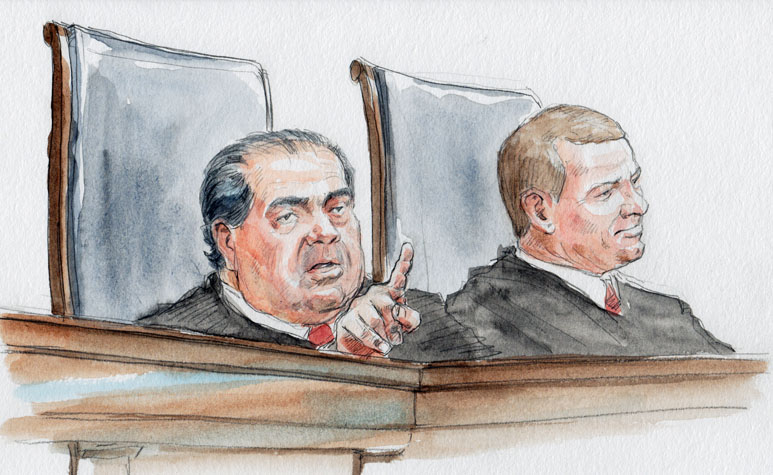 That was the reaction on Wednesday of a government lawyer, Deputy Solicitor General Ian H. Gershengorn, as he tried to head off a lawsuit against two Secret Service agents for the way they chose to handle a protesting crowd near President George W. Bush eight years ago.  Scalia’s response? “I really don’t understand what the government is doing here…you want to win this case, but not too big…You want us to find for you, but on the narrowest possible ground.”

These exchanges occurred Wednesday as the Court heard the case of Wood v. Moss.  The argument turned out to be mostly about a dilemma laid out by Justice Stephen G. Breyer:  how to make legal room for people to protest against a president, but without creating a “Praetorian Guard” around the president that is “above the law.”

What that seemed to imply, and what Gershengorn’s argument seemed to support, was that sometimes, the Secret Service could be haled into court for suppressing political dissent, but such a lawsuit might have to be kept within quite strict limits — which were explored but not clearly defined. 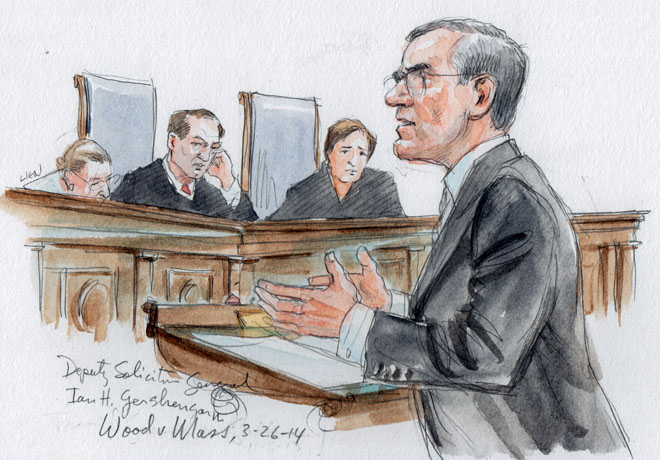 That prospect seemed clearly to nettle Justice Scalia.  Although he tried without success to enlist Gershengorn as a full ally, he did not hesitate to pitch fervently to his colleagues the simplest answer:  just don’t allow anyone to go to court to make a First Amendment claim against the Secret Service — period.

And Scalia had an almost-as-simple alternative: “It doesn’t matter,” he said, if the Secret Service wants to suppress dissent, as long as it is taking action to protect the president from harm.  Just as the Court doesn’t inquire whether police had a bad motive for stopping a car on the highway, as long as they had a law enforcement reason (such as a broken tail light), the Secret Service’s motives for crowd control shouldn’t make a difference, according to Scalia.

Gershengorn, however, held firmly to his chosen path: whatever right there may be to protest against a president without being censored by the Secret Service, such a right was not “clearly established” when this particular incident occurred in 2004.  If the Court agreed, that would establish a form of legal immunity for the two agents.   But it wouldn’t head off other protesters’ lawsuits claiming suppression.

As it turned out, the government lawyer was not prepared — at least not at this point — to block all such lawsuits, because he would end up conceding that, if there is proof that dissent was suppressed, and there was no security rationale for doing so, then a lawsuit could go forward.

Among other consequences of letting such a lawsuit go forward, of course, would be that lawyers for demonstrators in a future case would be demanding the right to probe the intent of the Secret Service, and that might lead into questioning agents about the specific techniques of protecting the president’s safety.

And that prospect seemed worrisome to other Justices, and especially to Chief Justice John G. Roberts, Jr., who foresaw a possible penetration by lawyers of the secret part of what the Secret Service does.  Gershengorn did his best to encourage that kind of concern, but his concession that some lawsuits against agents might go forward even with that risk seemed inconsistent.

The lawyer arguing for the demonstrators in this case, Steven M. Wilker of Portland, Oregon, did not appear to be especially successful in assuring the Justices that a judge trying such a lawsuit could keep the inquiry into protective methods within safe limits. 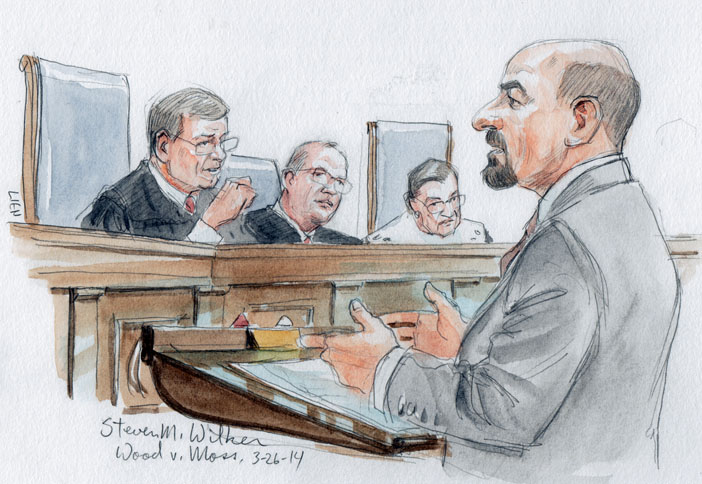 Still, there were points in the argument where Wilker might have found some reassurance for his clients’ legal claims.  Most notably, Justice Anthony M. Kennedy commented that, if this particular lawsuit were not allowed to go ahead on a dissent-suppression plea, “nothing will.”

Further, Wilker had to be encouraged that the Justices — except, perhaps, for Scalia — were keenly interested in the specific facts of the incident involving the pro-Bush and anti-Bush counter-demonstrations that occurred in Jacksonville, Oregon, while the President was traveling in October 2004.   And the questions explore various scenarios on whether the Secret Service had put the anti-Bush protesters at a disadvantage, and, if so, why they had.

Given that Wilker might have assumed that the Court had taken the case explicitly to insulate the Secret Service from such lawsuits, the argument that occurred was not anywhere near that simple.

Wilker’s most difficult moment came when the Chief Justice demanded that he answer, in a split second and without thinking much about it, what he would have chosen to do as a Secret Service agent if an emergency had arisen during that incident.  It was a question that posed a threat to undermine Wilker’s argument and he was clearly caught off-guard by it.

Although the Justices at times talked almost casually about the possibility that someone in the crowd might have thrown a hand grenade over a fence while President Bush was dining at an outdoor café, the Court mainly treated the case with utmost seriousness, keenly sensing that the decision they reach might well have a significant impact on presidential safety.