Readers of the Supreme Court’s decision yesterday in Daimler Chrysler v. Bauman may have learned two things:  First, it is increasingly difficult to establish general jurisdiction over a corporation for conduct unrelated to the forum; second, the Court ultimately resolves the issue it wants to, which may not be the one the parties focused on.

When the parties briefed Daimler to the Court, they presented it as a question about the interaction of agency and general jurisdiction.  Daimler is a German corporation that was sued in California by Argentinian plaintiffs for human rights violations in Argentina.  The Ninth Circuit upheld jurisdiction, reasoning that MBUSA, an indirect subsidiary of Daimler, did extensive business in California, and its conduct could be attributed upward to Daimler.  The circuits have disagreed over when such conduct may be attributed to a parent corporation, and Daimler argued that the Ninth Circuit made it too easy to attribute one corporation’s behavior to another. 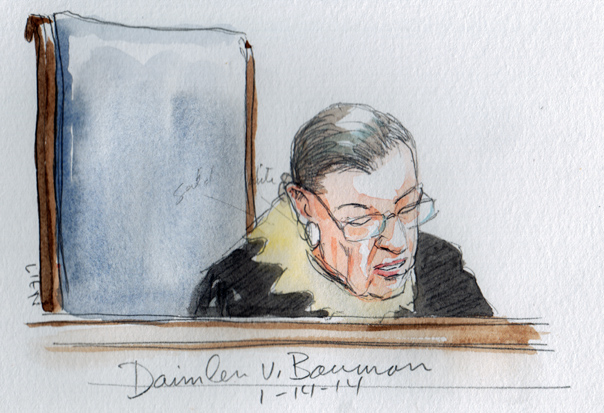 But the Court resolved the question quite differently.  In keeping with a line of questions she had asked at argument, Justice Ginsburg wrote a broad opinion for eight justices holding that it did not matter whether MBUSA’s conduct was attributed to Daimler.  Even if it was, California did not have general jurisdiction over Daimler.

With the question framed that way, the Court finally turned to the question presented – sort of.  It said the Ninth Circuit’s agency test would “stack the deck,” and “sweep beyond” other approaches that the Court had already rejected as too broad. But it nonetheless went on to assume that MBUSA’s conduct could be attributed to Daimler.  Even so, said the Court, Daimler was not “at home” in California.  Outside of “an exceptional case,” the Court ruled, general jurisdiction will generally be limited to the places where a corporation is incorporated and its principal place of business.

Justice Sotomayor wrote a long opinion concurring in the judgment.  She would have found the exercise of jurisdiction unreasonable on fact-specific grounds.  She objected to the majority’s decision to go beyond the agency question and also to the merits of its ruling on general jurisdiction.  Justice Sotomayor dueled with the majority at length about a 1952 precedent, Perkins v. Benguet Consolidated Mining Co., in which a Philippine mining corporation had temporarily ceased operating during World War II and apparently been managed out of Ohio, where the Court had permitted general jurisdiction.  Ultimately, however, the majority saw Perkins as an unusual “exceptional case,” not an analogy for future claims of broad general jurisdiction.

Plain English:  If you want to sue a corporation in a particular court, you need to establish a connection between the corporation and the place where you are suing.  The most common way to do that is to show that thing you are suing for happened – at least partly – in that place.  But it is also possible to sue a corporation in its “home” place, for anything it does, anywhere in the world.  Daimler is a German corporation, but one of its subsidiaries has a California “home,” and the Ninth Circuit held that was enough to treat it as Daimler’s “home” as well.  The Court rejected this view.  Even if its subsidiary’s contacts with California were relevant to Daimler’s contacts, Daimler’s true home was elsewhere, and therefore it could not be sued in California for activities that had nothing to do with California.