Argument recap: Trying to salvage a lost cause

It is difficult to imagine a greater letdown for a lawyer appearing before the Supreme Court than when a Justice who had seemed potentially sympathetic asks the lawyer for the other side near the close: “Do you care how you win?”  That is the way it went on Tuesday as the Justices sent every hint they could imagine that they won’t let a U.S. court decide a case against a German company for incidents that happened years ago in Argentina.

The case of DaimlerAG v. Bauman (docket 11-965) is the latest case to reach the Justices on the authority of U.S. courts to rule on claims of human rights violations overseas against foreign nationals.  The most that the lawyer arguing for those who sued the German automaker Daimler in federal court in California might get, it seemed, was that the case might be sent back to a lower court for further review.  If not that, the case may just end in the Supreme Court, with very little if anything left of it.

The Court has made it quite clear in recent years that it is highly skeptical of courts, either at the state or federal level, reaching out to hold a business firm to account based on the firm’s debatable ties to that court’s area of authority.  That instinct was clearly on display again in the Daimler case.

The hearing did not seem an even contest, with the Court’s members basically canvassing a variety of winning ways for Daimler, while the lawyer for the suing Argentine residents tried to persuade the Court that Daimler had forfeited all of those arguments, either by waiving them in lower courts or not arguing them in the Supreme Court.

This case involves claims, under both federal and state law, that a Daimler subsidiary in Argentina engaged in atrocities against residents of that country during the so-called “Dirty War” waged by a dictatorship there in the 1970s and 1980s.  Those claims target the parent Daimler firm, on the Argentine residents’ theory that it does a good deal of business selling cars in California through a supposedly independent subsidiary located in the state.

The U.S. Court of Appeals for the Ninth Circuit ruled that those claims could go forward to a trial, on the premise that the parent company has enough of a connection to the car sales business in California as to be held accountable in a federal court.  Daimler has taken the case to the Supreme Court to argue, basically, that this is an extravagant reach of court jurisdiction, in violation of the Constitution’s guarantee of due process.

While some of the Justices — notably Antonin Scalia — seemed troubled by the prospect that the Court might constitutionalize the whole question of state law governing jurisdictional contacts with a state, it was obvious that most of the members of the Court — and perhaps all — had reacted negatively to the sweep of the Ninth Circuit’s ruling.   Whatever rule of law they might choose to overturn the Ninth Circuit, it appeared that they would find one that basically would say this reach was just far too ambitious.

Justices Ruth Bader Ginsburg and Elena Kagan, for example, suggested that if the Argentine residents’ case goes forward, any corporation from anywhere in the world would be subject to being sued in virtually any U.S. state, even if its ties to that state were exceedingly tenuous.   And Justice Sonia Sotomayor, who here and there had seemed sympathetic to the Argentines’ right to sue, is the one who said near the end that the Justices across the bench thought that the Ninth Circuit had issued an unreasonable decision, and thus wondered why Daimler would care which legal rule was chosen as the basis for its victory.

Daimler’s lawyer, Thomas H. Dupree, Jr., of Washington, D.C., encountered a bit of trouble from some of the Justices for having conceded what might have been essential points in the case — a point that Dupree disputed.  But, beyond that, his time at the lectern was made very easy as Justice after Justice suggested that Daimler’s link to the California subsidiary were nowhere near sufficient to put the parent company in line to be sued there. 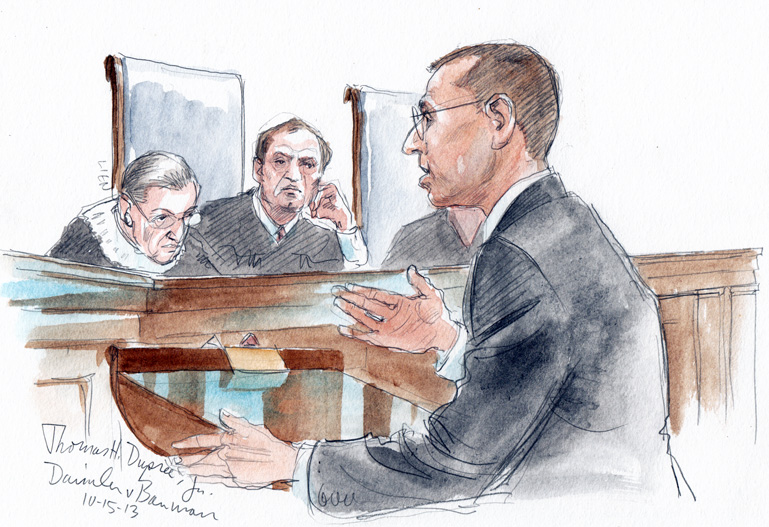 Justice Stephen G. Breyer, for example, asked Dupree: “How do we deal with a Court of Appeals which seems to seriously misstate a state law” about when a parent can be sued via its links to a subsidiary in that state.  Unsurprisingly, Dupress answered: “Simply reverse the Ninth Circuit.”

Justice Anthony M. Kennedy openly solicited advice from Dupree on how the Court should write an opinion that, of course, would be entirely favorable to Daimler.

Deputy U.S. Solicitor General Edwin S. Kneedler, representing the federal government in support of Daimler’s side in the case, spent much of his brief time in exchanges with the Justices over the details of the relationship between Daimler and its California subsidiary.

That, then, was the daunting atmosphere that confronted Washington lawyer Kevin K. Russell, speaking for the Argentine residents claiming atrocities against them or their relatives by the Argentine regime.   Russell opened with a theme that he would press, over and over again: what the case was not about.  By that, it became clear, he meant all of the arguments that Daimler might have made in defending itself, but had forfeited along the way.

The case, he said, had been in court for eight years, and by now its posture was that Daimler itself was clearly subject to being sued in California.  Russell would later make the argument that the Court — if it did not dismiss Daimler’s petition outright, or send the case back to lower courts for further development — should rely upon the simple proposition that, if a business firm does a significant amount of business in an area, it should be open to lawsuit there.

Soon, Justice Scalia was challenging Russell with the suggestion that, if Daimler could be sued in this case, there was no way that stockholders of the parent company could not also be sued, just as widely.  Russell responded that stockholders were different, and so Scalia’s suggestion did not follow.

But as the remainder of the argument unfolded, Russell found himself confronted repeatedly by Justices making points favorable to Daimler, to which his response most often was that those were points that Daimler had given up.

The Argentines’ lawyer sought to rely on the basic plea that doing a good deal of business in a state — as Daimler does in California through its subsidiary — should be enough to confer court jurisdiction there.  And, he said, if the Court is now prepared to abandon that simple approach, “it should say so — but in a case in which that is fully briefed; that has not been briefed here.”

After Justices Ginsburg and Kagan had posed questions about whether it was unreasonable for Daimler to have to face this lawsuit, and about how widely Daimler could face legal woe if it could be sued here, Justice Sotomayor then remarked that the argument seemed to be moving toward a conclusion that jurisdiction was valid only if it could meet a basic test of reasonableness.

When Dupree returned to the lectern for rebuttal, she commented that the case was moving in that direction, so why should Daimler care about how it won?  If the “exercise of jurisdiction in this case is unreasonable,” why should Daimler not be content with that?  Dupree said it was important for the Court to provide some guidance on the core jurisdictional challenge that he said Daimler had been pressing “from Day One.”

Disclosure: Kevin Russell and others joined in his law practice have various roles with this blog in addition to their legal work.  The author of this post, however, operates independently of any law firm.