On Tuesday, Justice Sonia Sotomayor asked a lawyer for the auto giant Daimler AG whether he “cared how you win.”  Today, Sotomayor pressed former Acting Solicitor General Neal Katyal to tell the Court “which way would you rather lose?”  Katyal was appearing on behalf of Scott Cheever, who was convicted of capital murder for the death of a sheriff, only to have his conviction overturned by the Kansas Supreme Court.   By the time the oral argument was over, it appeared that the lower court’s ruling throwing out Cheever’s conviction is in real jeopardy, though Cheever could be well positioned to ultimately win his case back in the Kansas courts, which may have been his lawyers’ strategy all along. 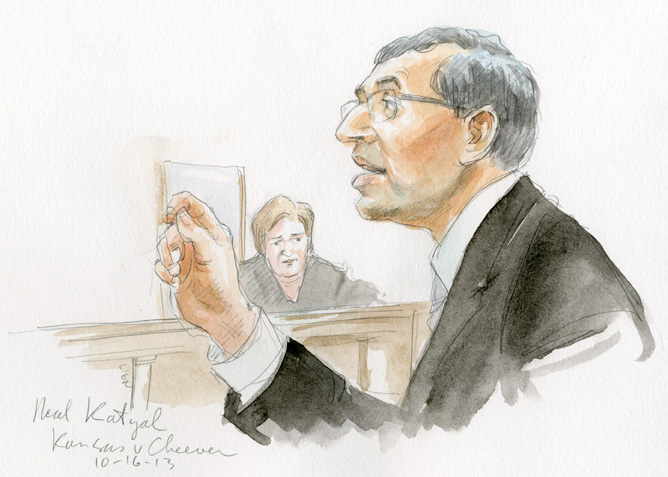 The issue in Kansas v. Cheever was whether Cheever waived his privilege against self-incrimination when he introduced expert testimony to support his contention that he could not have intended to kill the sheriff because he was in a state of “voluntary intoxication.”  If so, he arguably opened the door to the state countering with its own expert, who had conducted a court-ordered psychiatric examination of Cheever.  Arguing on behalf of the state, Kansas Attorney General Derek Schmidt fielded several questions from Justices Scalia and Kennedy about whether his proposed rule would apply more broadly.  If, Justice Scalia asked, once Cheever decided to make his mental state an issue, he could no longer rely on his Fifth Amendment privilege, wouldn’t the same be true even if Cheever didn’t call an expert, but instead testified himself?  Would the state still be allowed to call an expert?  Schmidt responded that the state was just seeking a “rule of parity,” so that the Court in this case did not need to decide whether to draw the line. 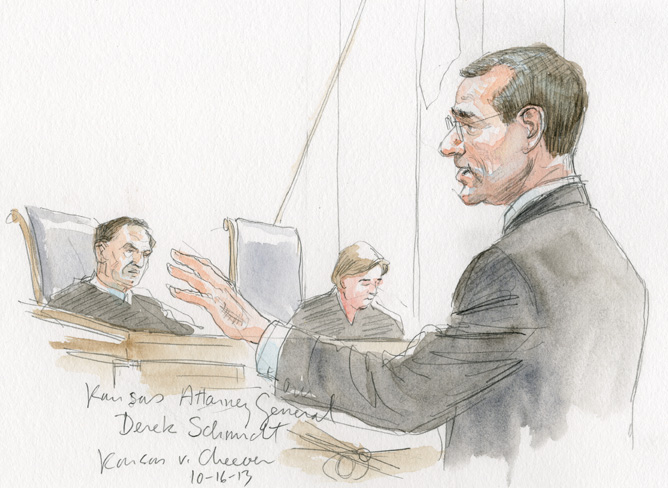 Justice Samuel Alito focused on where the compulsion occurred – here, he asserted, the only issue is whether Cheever’s statements to the government’s expert were compelled when he made them, because the use of the statements at trial was not constitutionally problematic.  This would be significant because, if the statements were not compelled, the government could use them against a defendant regardless of whether the defendant had “opened the door” to their use.  Thus, Alito later asked Assistant to the Solicitor General Nicole Saharsky, who argued on behalf of the federal government in support of Kansas, whether the real question is in fact whether Federal Rule of Criminal Procedure 12.2 – which had authorized Cheever’s psychiatric exam when he was awaiting trial on other federal criminal charges – is constitutional.

Importantly for Cheever, Justices Ginsburg and Breyer suggested that, even if the Court were to agree with the state, there would still be questions on remand about whether the expert in this case exceeded the scope of any waiver by going beyond whether Cheever was “voluntarily intoxicated.”  Schmidt told the Court (and Saharsky later agreed) that the standard with regard to the scope of the waiver should be whether it is “reasonably related or relevant to the . . . direct examination.”  (If Justice Breyer had hoped to use the point to stave off a ruling on the merits against Cheever by sending the case back to the Kansas Supreme Court, he didn’t appear to have found many takers on the Court.)

When it was his turn at the lectern, Neal Katyal described the case in stark terms:  “The state is trying to use Scott Cheever’s words to execute him.”  Katyal then tried to focus the discussion on the question of the scope of any waiver of Cheever’s Fifth Amendment privilege against self-incrimination.  But he was quickly sidetracked by Justice Ginsburg, who asked whether he was in fact arguing that Rule 12.2 was unconstitutional.  Katyal eventually told Ginsburg that, at least when employed to use a defendant’s words against him, the rule “raises a deep constitutional question.”

Then, despite Katyal’s best efforts, he faced a barrage of skepticism, from Justices of all ideological stripes.  Justice Scalia emphasized that a defendant waives his Fifth Amendment privilege and subjects himself to cross-examination whenever he opts to testify; “this is,” he argued, “quite similar.”   Justice Kagan – whose vote Katyal would almost certainly need to prevail – was equally dubious, telling Katyal that “the cross-examination cases say you can’t become a witness halfway,” so that “[o]nce you have decided to become a witness, you have to subject yourself to all the things that every other witness is subjected too.  And . . . you haven’t convinced me that the same point isn’t true here.”

Other Justices focused on what they perceived as the unfairness that would result from a rule that would allow a defendant to rely on a mental health defense without allowing the state to counter with the views of an expert who had examined him — in essence, tying one hand behind the government’s back.  Chief Justice Roberts compared the use of psychiatric evidence to the use of ballistics testing in a shooting:  just as the government gets to do its own ballistics testing, rather than simply being able to cross-examine a defendant’s expert, when dealing with psychiatric evidence, he asserted, the way to test the evidence is by examining the defendant.  And Justice Stephen Breyer suggested that Katyal was putting the government in “an impossible position.”  It was soon thereafter that Justice Sotomayor turned to him to ask, “assuming the incredulity of my colleagues continues with your argument, which way would you rather lose?”

Katyal closed by reminding the Court that, under the state’s argument, “you’re essentially saying that the defendant’s own words can be used by the State to shoulder the load against him.”  And although such a result “may be something you want to do for policy reasons,” it would be “foreign to the Fifth Amendment.”  Unfortunately for Katyal and Cheever, it seems unlikely that at least five Justices will share their misgivings on the issue they agreed to decide.  A decision in the case is expected by next summer at the latest.