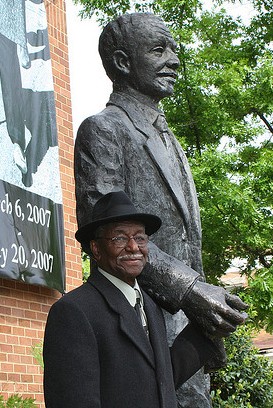 This year marks the fiftieth anniversary of the Birmingham civil rights protests, which led to the passage of the Civil Rights Act of 1964 and gave rise to two little-known Supreme Court cases.  A more detailed narrative of these cases will appear in the Journal of Supreme Court History in December 2013.  Deborah A. Roy is a Trial Attorney, Antitrust Division, United States Department of Justice.  The views expressed are not purported to reflect those of the United States Department of Justice.

Fifty years ago, segregation was the rule of law in almost all public facilities in the City of Birmingham.  Since the mid-1950s, Reverend Fred Shuttlesworth, pastor of the Bethel Baptist Church, had been waging a war against segregation.  Due to his efforts, he may hold the distinction of being a named petitioner in more Supreme Court cases than any other person.

On April 2, 1963, Dr. Martin Luther King, Jr., arrived in Birmingham to join Shuttlesworth in a direct action campaign to end segregation.  Non-violent marches were one of the key tactics that the organizers of the Birmingham campaign sought to employ.  A city ordinance, however, required a permit for parades or public demonstrations.

On April 3, Shuttlesworth sent Lola Hendricks, the secretary of a local civil rights organization, and the Reverend Ambus Hill of the Lily Grove Baptist Church to the office of City Commissioner Bull Connor to request a permit to parade or demonstrate on the sidewalks of Birmingham.  Connor, an avowed segregationist, responded, “No, you will not get a permit in Birmingham, Alabama to picket.  I will picket you over to the City Jail.”  Undeterred, the Birmingham campaign launched with sit-ins and marches; participants were arrested for parading without a permit.

A week later, the City of Birmingham obtained a court injunction prohibiting the leaders of the campaign from parading without a permit.  Dr. King had planned a Good Friday march; however, he had never violated a court injunction.  Believing that a decision not to march would end the campaign, Dr. King, Reverend Shuttlesworth, and fifty other people marched on Good Friday and were arrested.  During the week that he spent in jail, Dr. King expressed the principle of non-violent direct action to counter pervasive injustice in his “Letter from a Birmingham Jail.”

In Walker v. City of Birmingham, decided in 1967, the Supreme Court, in a five-to-four decision, upheld the convictions of eight ministers for violating the injunction, finding that they should have applied to the Alabama courts to have the injunction modified or dissolved, rather than willfully violate it.  Chief Justice Earl Warren filed a dissent, writing that “there is only one apparent reason why the city sought this injunction and why the court issued it; to make it possible to punish petitioners for contempt rather than for violating the ordinance, and thus to immunize the unconstitutional statute and its unconstitutional application from any attack.  I regret that this strategy has been so successful.” Rev. Walker, Dr. King, Rev. Shuttlesworth, and five other ministers returned to Birmingham to serve their sentences for violating the injunction.

Two years later, in Shuttlesworth v. City of Birmingham, a unanimous court overturned Shuttlesworth’s conviction for parading without a permit on Good Friday, agreeing with Warren that the Birmingham parade ordinance as written and applied in 1963 was unconstitutional.  Four of the Justices, who had been in the majority in Walker, gave less deference to a legislative ordinance than a court order.  The fifth Justice in the Walker majority, Tom C. Clark, had been replaced by Thurgood Marshall, the first African American to join the Court (although he took no part in the Shuttlesworth decision).