Recent nominees to the U.S. Court of Appeals for the D.C. Circuit have had something in common: many have been prolific advocates before the United States Supreme Court. 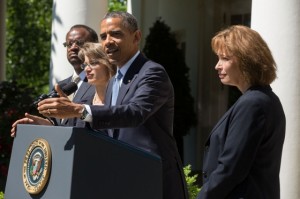 President Obama announcing the nominations of Patricia Millett and Nina Pillard, along with Robert Wilkins, on June 4, 2013. (Wikimedia Commons)

Ten years ago, John Roberts was confirmed to the D.C. Circuit after arguing thirty-nine times before the Court.  The Senate recently confirmed then-Principal Deputy Solicitor General Sri Srinivasan.  Last month, Patricia Millett was nominated to the seat Roberts vacated in 2005 when he was promoted to the Supreme Court; she has argued thirty-two cases of her own. And nominated alongside Ms. Millett was Nina Pillard, who has also argued nine cases (and briefed more than two dozen) at the Court.

The career paths of all seven included common elements – time in both private practice and governmental service, in which all advocated before the nation’s highest Court.  We thought it would be worth examining how the experiences of  four prepared them for judicial service.

After graduating from Harvard Law School in 1979, John Roberts clerked for Second Circuit Judge Henry Friendly and then-Associate Justice William Rehnquist.  Both were formative influences on the future Chief Justice.  In practice, Roberts turned to public service, serving for four years as Associate Counsel to President Ronald Reagan.  He then joined the Washington office of Hogan & Hartson (now Hogan Lovells).  In 1989, the Supreme Court appointed Roberts to argue his first case before the Court, United States v. Halper, which he won.

Roberts then moved to the Office of the Solicitor General, serving as Principal Deputy for four years.  He argued eighteen cases before the Court.  During this time, President George H.W. Bush nominated him to fill an open seat on the D.C. Circuit.  Democrats controlled the Senate, however, and his nomination did not move forward.  Roberts returned to Hogan & Hartson when the Clinton administration took office.

For the next ten years, Roberts would remain a partner at Hogan & Hartson. He eventually rose to serve as head of the firm’s appellate practice. During that time, he would argue another nineteen cases before the Court, including a defense of Alaska’s sex offender registration law against a challenge in Smith v. Doe. Roberts would also represent a number of states in the Microsoft antitrust case, United States v. Microsoft. He was ultimately victorious in twenty-five of his thirty-nine arguments before the Court.

In May 2001, President George W. Bush nominated Roberts to the D.C. Circuit once again. Although Roberts did not receive a hearing until Republicans took control of the Senate in 2003, he was confirmed unanimously in May of that year. Roberts authored forty-nine opinions for the D.C. Circuit before he was nominated to the Supreme Court in 2005.

Sri Srinivasan was born in Chandigarh, India, but grew up in Lawrence, Kansas. After a standout high school basketball career, he received undergraduate, business, and law degrees from Stanford University. Srinivasan clerked for Judge J. Harvie Wilkinson III on the U.S. Court of Appeals for the Fourth Circuit and Supreme Court Justice Sandra Day O’Connor after graduation, with a year in between his two clerkships as a Bristow Fellow in the Office of the Solicitor General.

In 1998, Srinivasan joined O’Melveny & Myers as an associate. But by 2002, he had returned to the Solicitor General’s office – this time with a different political party in office. From 2002 to 2007, he served as an Assistant to the Solicitor General under both Ted Olson and Paul Clement. Srinivasan argued his first of twenty-five cases before the Court in 2003 in Sattazahn v. Pennsylvania.

During another stint in private practice at O’Melveny & Myers from 2007 to 2011, Srinivasan represented former Enron C.E.O. Jeffrey Skilling before the Court in his appeal, Skilling v. United States. He also took a one-year lecturer position at Harvard Law School. But Srinivasan soon rejoined the Solicitor General’s Office — this time in 2011 as Principal Deputy Solicitor General. He argued another eight cases for the government, including this past Term’s United States v. Windsor (in part) and Arizona v. Inter Tribal Council of Arizona.

In June 2012, President Obama nominated Srinivasan and Caitlin Halligan to open seats on the D.C. Circuit. While Halligan’s nomination failed, the Senate did not act on Srinivasan’s. The President re-nominated him in January 2013, and he was confirmed in May. His approval by the Senate made him the first South Asian court of appeals judge.

Born in Maine but eventually settling in Illinois, Patricia Millett’s journey to a nomination for the D.C. Circuit began after her graduation from Harvard Law School in 1988. For two years, she clerked for Judge Thomas Tang of the Ninth Circuit.

She then continued in public service, joining the Department of Justice’s Civil Division Appellate Staff. In her four years at the DOJ, she argued across many federal and state appellate courts, defending a wide variety of federal laws.  During this time, she became an adjunct professor at George Washington University Law School.

In 1996, Millett left the DOJ to become an Assistant to the Solicitor General. In over eleven years that spanned both the Clinton and George W. Bush administrations, Millett argued twenty-five cases before the Court and briefed nearly fifty on issues ranging from issues of civil liberties to criminal law.  Millett received the Attorney General’s Distinguished Service Award in 2004 for her efforts in representing the government before the Court.

Millett moved to private practice in 2007. She joined Akin Gump and worked to expand the firm’s appellate litigation practice, alongside this blog’s Tom Goldstein. She argued another seven cases before the Court, including this past Term’s Arizona v. Inter Tribal Council of Arizona.  She regularly exchanges the record for oral argument appearances by a female lawyer before the Supreme Court with Arnold & Porter’s Lisa Blatt, who currently has thirty-three arguments.

As co-chair of the firm’s national appellate practice, she represented a broad array of clients and cases, including before the D.C. Circuit itself. During her time at Akin Gump, she has become widely regarded as one of the top appellate lawyers in the United States.

President Obama nominated Millett to the D.C. Circuit last month. Since then, her nomination has received the support of seven Solicitors General from the H. W. Bush, Clinton, and W. Bush administrations — including prominent Republicans such as Ken Starr, Ted Olson, Paul Clement, and Greg Garre.  Olson also wrote to us that he is a “fierce admirer” of Millett, who is “going to be a marvelous judge,” emphasizing that “she has a smart, penetrating mind, she’s a very, very skillful advocate, and she is delightful to work with and to know.”  And Garre wrote about her “deep appreciation for the judicial process.”

Millett’s extremely active time in practice is also notable because it coincided with the military service and deployment by her husband, who was called up from the military reserves.

A native of Massachusetts, Nina Pillard graduated from Yale College and then Harvard Law School in 1987. Her legal career began as a one-year clerk for Judge Louis Pollack of the Eastern District of Pennsylvania. She then returned to the ACLU, where she had previously held a summer position, for a one-year fellowship.

Pillard joined the NAACP Legal Defense and Education Fund in 1989, where for five years she served as assistant counsel, litigating cases of racial discrimination and appeals. Like Srinivasan and Millett, she then joined the Office of the Solicitor General as an Assistant. In 1995, Pillard achieved one of her notable Supreme Court successes as the author of the Solicitor General’s brief in United States v. Virginia, in which the Court held that the male-only admissions policy at the Virginia Military Institute was unconstitutional.

In 1997, Pillard left the Solicitor General’s office to become a tenure-track Associate Professor at Georgetown University Law Center. But she soon took a leave to serve as Deputy Assistant Attorney General in the Office of Legal Counsel from 1998 to 2000. She returned to Georgetown and received tenure in 2005.

Pillard has argued nine cases before the Court, including the very significant successful defense of the Family and Medical Leave Act in the 2003 case, Nevada Department of Human Resources v. Hibbs. She also served on the ABA Standing Committee that reviewed Supreme Court nominee Samuel Alito and rated him “well qualified” before his confirmation.

As a professor, Pillard has taught on issues ranging from constitutional law to civil procedure – including a year spent co-directing the Center for Transnational Legal Studies in London. Since 2011, Pillard has served as Faculty Co-Director for Georgetown’s Supreme Court Institute. The program provided a moot court for counsel in every case argued during the October 2012 Term. In a story for The New York Times, Adam Liptak quoted Justice Ruth Bader Ginsburg, who described this Supreme Court laboratory as “a tremendous service to the court.”