In Koontz v. St. Johns River Water Management District, the Supreme Court ruled, in a five-to-four decision by Justice Alito, that when a government – any government – engages in land-use regulation, including by denying a permit or demanding payment as a condition for a permit, the government must show that there is a nexus and rough proportionality between its demand on the landowner and the effects of the proposed land use. The case broadens property owners’ rights to bring constitutional challenges to land-use decisions, and is likely to result in increased litigation. 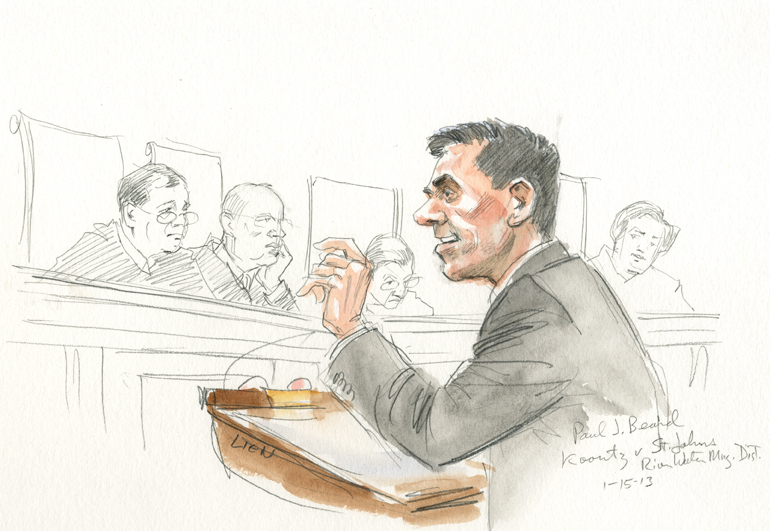 The petitioner in this case, Coy Koontz, owned land in the Florida wetlands. He sought to develop a portion of his property, and as part of his proposal offered to grant a substantial conservation easement to the St. Johns River Water Management District (the “District”). The District rejected his proposal, informing him that his permit would be denied unless he agreed to do one of two things: (1) scale back his planned development and give the District a larger conservation easement; or (2) maintain the proposal, but also hire contractors to make improvements to separate land owned by the District. The District offered to consider alternative approaches as well.

Koontz found the District’s demands unreasonable, and he sued under a state law that permits property owners to recover money damages in the event of an unconstitutional taking. He argued that under the Supreme Court’s decisions in Nollan v. California Coastal Commission and Dolan v. City of Tigard, the District’s demands did not have the requisite “nexus” and “rough proportionality” to the effect his proposal would have on land use. After a trial and appeal, the Florida Supreme Court held that the suit must be dismissed because a takings claim was not an appropriate response to the District’s conduct. Specifically, the court held that Nollan and Dolan do not apply in this case for two reasons: first, those cases dealt with conditions on land use accompanying a permit that was approved, while in this case, the permit was denied; second, this case did not involve a taking of a particular property interest – for example, a piece of land – but instead only a demand for money (to pay the contractors).

The Supreme Court reversed. The Court first explained that the “unconstitutional conditions” doctrine, which prohibits the government from coercing people into giving up their constitutional rights, applies in this case because the conditions the District sought to place on the permits would constitute an unconstitutional “taking” without “just compensation.” The Court explained that Nollan and Dolan establish that the Fifth Amendment protects property owners from takings that occur in connection with applications for land-use permits, while permitting the government to obtain concessions that offset the public harms caused by certain land uses. Thus, “[u]nder Nollan and Dolan the government may choose whether and how a permit applicant is required to mitigate the impacts of a proposed development, but it may not leverage its legitimate interest in mitigation to pursue governmental ends that lack an essential nexus and rough proportionality to those impacts.”

With these principles in mind, the Court held first that Nollan and Dolan apply with equal force whether the government approves a permit conditioned on the property owner turning over property or, on the other hand, denies a permit because the property owner refuses to do so. A contrary result, the Court explained, would draw a map to circumvent Nollan and Dolan. That portion of the holding was uncontroversial – it garnered approval from all nine Justices on the Court. The Court also noted that when a permit is denied, so that no condition becomes effective and nothing is taken from the property owner, then the Fifth Amendment does not, by itself, authorize a remedy of compensation. Consequently, the remedies available, if any, are a matter of state law.

At argument, it seemed that a majority of the Court was sufficiently disturbed by that prospect that the District was likely to prevail. But it didn’t, because the five Justices in the majority are apparently more concerned that local governments will attempt to evade Nollan and Dolan by demanding monetary payments in lieu of easements or other real property. The Court limited the scope of its holding by emphasizing that the “fulcrum this case turns on is the direct link between the government’s demand and a specific parcel of real property.” In other words, because the demand for payment arose out of the permitting process relating to specific property, the case is sufficiently analogous to a government effort to take that property directly. The Court also dismissed the concern that taxation and other exactions would face constitutional takings challenges by noting that courts have managed to distinguish them in the past – although it did not articulate a clear rule that would facilitate such distinctions going forward.

Justice Kagan’s dissent begins by acknowledging her agreement with the Court’s resolution of the first question presented. It then argues, however, that the majority’s decision to apply Nollan and Dolan to demands for money “threatens to subject a vast array of land-use regulations, applied daily in States and localities throughout the country, to heightened constitutional scrutiny.” The dissent explains that under the Court’s prior decision in Eastern Enterprises v. Apfel, an order to pay money does not constitute a “taking,” and so the Nollan/Dolan standard should not apply. The dissent also argues that independent of the legal rule, factual hurdles in the case compel a ruling for the District. Specifically, the dissent argues that because all the District did was give Koontz options for how to develop his land, it never demanded that Koontz give up anything as a condition for receiving a permit. The dissent also argues that because the permit was denied, no actual taking occurred. These points were not contested in the majority opinion, but it decided to remand the case for the Florida courts to decide them in the first instance.