Giving tens of thousands of already married same-sex couples in a growing list of states fully equal access to all benefits that the federal  government provides for those who are wed, a closely divided Supreme Court on Wednesday struck down a 1996 law on the theory that it was aggressively anti-gay.  And, by a different combination of Justices, the Court came close to assuring that millions of still-single gays and lesbians in California will very soon be able to legally marry.

Even while the Court firmly insisted that it was not saying anything about the authority of states to deny marital rights to same-sex partners — as more than thirty states still do — the obvious practical and political impact of two five-to-four decisions was to advance the cause of equality for homosexuals everywhere in the country, perhaps further than it had ever gone in more than four decades of gay activism. 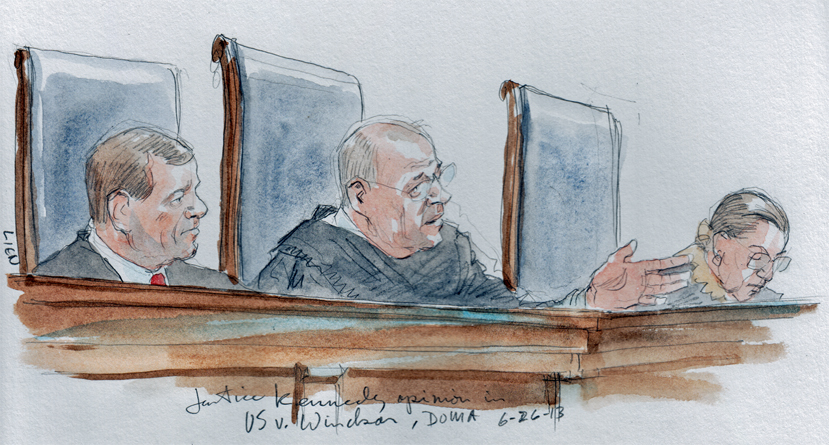 In fact, the rulings were issued just two days short of the forty-fourth anniversary of the famous Stonewall riots, the first uprising of homosexuals to assert their claims to equality in America, outside a bar in New York’s Greenwich Village.  Those riots are regarded as the dawning of the gay rights movement.

And the decisions emerged exactly on the tenth anniversary of the Court’s historic decision in Lawrence v. Texas, declaring a constitutional right of privacy in the intimate relations of gays and lesbians — a decision that the Court majority cited on Wednesday in affirming the dignity of committed homosexual couples.

** It ruled unconstitutional the Defense of Marriage Act’s Section 3, which defines marriage for purposes of one thousand federal laws and multitudes of official regulations as the union of one man and one woman only — a definition that excludes probably millions of already-married same-sex couples from any of those benefits or opportunities.  “DOMA,” the Court majority said caustically, “writes inequality into the entire U.S. Code.”

** It decided that sponsors of California’s “Proposition 8,” adopted by the state’s voters in an election almost five years ago, did not have a legal right to be in the Supreme Court or in a federal appeals court to try to defend that measure from constitutional attack.  That is likely to have the early impact of putting into final effect a San Francisco federal judge’s 2010 decision striking down Proposition 8 under the U.S. Constitution.   Some 18,000 California same-sex couples already had been married when they had a brief chance to do so as the issue developed in that state, but now millions are likely to gain the right to marry when the judge’s ruling is implemented by state officials.  Happening perhaps in just a few weeks, that would make California the thirteenth — and largest — state to permit such marriages (along with Washington, D.C.).

** It declared, in quite explicit terms, that it was not deciding at this point whether the Constitution guarantees gays and lesbians a right to marry or whether the Constitution forbids states’ bans on such marriages.  That will leave the promoters of marriage equality to continue with their efforts, in state legislatures and in lower courts, to try to win the right one more state at a time.   The Court itself has a chance to take up that basic issue, as early as tomorrow, in a pair of new cases — from Arizona and Nevada — but it may not yet be ready to do so.

** And the Court did not spell out a new constitutional test for courts to use in judging new laws or other government actions that treat homosexuals less favorably than other people in similar settings and factual contexts.   Although DOMA’s benefits ban was nullified under the Fifth Amendment’s guarantee of legal equality, the majority opinion did not sort out explicitly which level of judicial review — in escalating toughness — is supposed to be used in gay rights cases.  In fact, the test that was applied this time appeared to be notably indistinct.

With the demise of the Defense of Marriage Act’s benefits ban in Section 3, for legally married gays and lesbians, the Court immediately — even if inadvertently — gave rise to a series of questions about how state governments are to deal with access to federal benefits when a state administers a federal program but refuses to recognize same-sex marriage.

The ruling did not do anything explicitly about another section of DOMA — Section 2, which gives the states the right to refuse to recognize gay marriages performed in other states.  That thus raised the prospect that a same-sex couple married in one of the states now allowing such unions could face obstacles to their marital rights when they moved into states that still do not recognize their unions.  This might be a particular problem for already-married gay couples serving in the military, who often have to move from state to state.

Although Chief Justice John G. Roberts, Jr., dissented from the ruling in the DOMA case, he went to special lengths in his opinion in that case to apply the states’ rights language that Justice Anthony M. Kennedy’s majority opinion had employed in justifying the nullification of Section 3.

Roberts wrote, borrowing words from the Kennedy opinion: “While ‘the state’s power in defining the marital relation is of central relevance’ to the majority’s decision to strike down DOMA here, that power will come into play on the other side of the board in future cases about the constitutionality of state marriage definitions.  So too will be concerns for state diversity and sovereignty that weighs against DOMA’s constitutionality in this case.”

The Court, the Chief Justice added, “may in the future have to resolve challenges to state marriage definitions affecting same-sex couples.”  His remarks about the majority arguments on states’ rights in this field seemed to be telegraphing his views on the basic definition of marriage — and an implied suggestion that lower courts might be interested in following.

While much of the disagreement among the Justices played out most vividly in the ruling on DOMA, the dispute in the other decision on Wednesday was comparatively muted.  Even so, that decision — finding no right by backers of California’s “Proposition 8” to be in court to defend it — did establish firmly a new principle of constitutional law.

That holding was that, when a state’s voters have approved new legislation or a new state constitutional amendment, and the state’s own officials refuse to defend it in court, the sponsors of the ballot measure will not be allowed to stand in for the state as the measure’s defenders.

The Chief Justice, who wrote the majority opinion in that five-to-four ruling, declared: “We have never before upheld the standing of a private party to defend the constitutionality of a state statute when state officials have chosen not to.  We decline to do so for the first time here.”

The lack of any defenders of “Proposition 8” led the Court to order the Ninth Circuit Court (which had nullified the measure) to dismiss the appeal that the sponsors had pursued in the Circuit Court.  In procedural terms, that dismissal will start a series of steps in lower courts that will determine just when California’s large population of gays and lesbians could gain a full right to marry.

The case will first make a stop in the Ninth Circuit, which must obey the Court’s order to dismiss the backers’ appeal.  That would leave standing the August 2010 decision by now-retired U.S. District Judge Vaughn R. Walker of San Francisco, striking down the measure on a broad constitutional premise of equality and due process.   Judge Walker’s order against enforcing “Proposition 8” thus would appear to go into effect once the case physically landed back in the District Court where he had sat, unless the measure’s backers can find some legal method to try to narrow its scope.

Absent such a narrowing, the Walker decision would require the top officials in California — the governor and attorney general — to apply the decision and to order county clerks across the state to begin issuing marriage licenses to gay and lesbian couples.  While the order also applies only to two counties’ clerks — in Alameda and Los Angeles — all clerks in California are likely to get orders to grant such licenses.

One of the ironies of the demise of the defense of “Proposition 8” in the Supreme Court’s procedural ruling on “standing” was that this case had been put together explicitly to be an ultimate test of a constitutional right to equal marriage for homosexuals — a test that ultimately the Supreme Court would settle.   In the end, the Court did not pass upon that issue, but appeared to have cleared the way for gays and lesbians to marry in that state, when whatever legal maneuvering remains reaches its end.