Handing Congress an assignment with profound political risks, a divided Supreme Court on Tuesday struck down a key part of the historic 1965 Voting Rights Act and left it to Congress to try to salvage the law as the effective ban on racial bias at the polls that it has been for nearly five decades.  It appears that the future of the Act’s core depends on members of Congress being willing to impose heavy new legal burdens on their own states.

Before the Court in Shelby County v. Holder (docket 12-96) were constitutional challenges to two of the main sections of the 1965 law; the Court nullified one and left the other formally intact but perhaps in deep peril, too.   The dissenters complained that, without the invalidated part, the other will be “immobilized.” 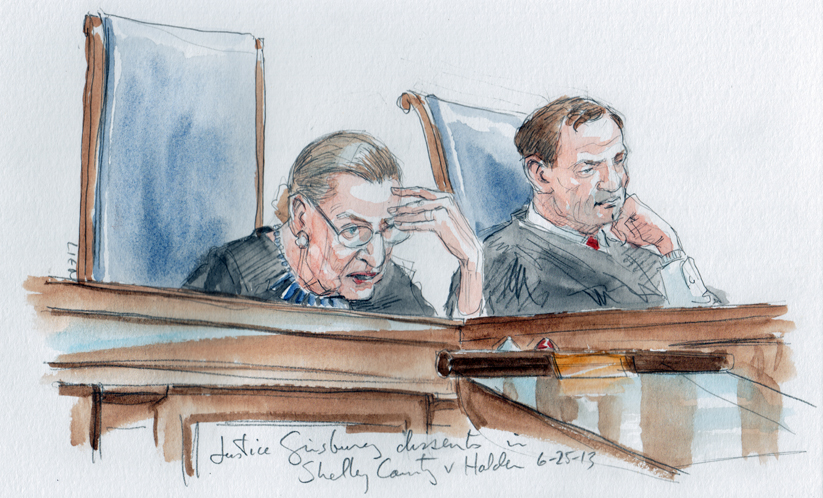 If the full potential impact of the ruling does occur, what would mainly be left to authorize challenges to racial discrimination in voting would be other parts of the law not under review Tuesday, but those parts require a potentially time-consuming process of one lawsuit at a time, persuading a court to give a remedy that applies to one state or local government per case.

The Court’s ruling, which had been telegraphed four years ago when the Court skeptically examined the 1965 law’s validity, addressed the main sections of the law in these ways:

** Section 4, which lays out the formula that will automatically bring a state or local government within the coverage of the law’s special obligations for states with a history of racial bias, was found unconstitutional as a violation of the Constitution’s guarantee of equality among the states.  The Court said the formula, based on data more than forty years old, was seriously out of date and did not reflect “current conditions” anywhere in the country.    “Congress may draft another formula based on current conditions,” the Court said.

** Section 5, which requires state and local governments selected under Section 4 to get official clearance in Washington before they may implement any change in their voting laws or procedures, however minor, was left on the books, but with a somewhat ominous statement that the Court simply was issuing “no holding” on that provision.  That provision is now scheduled to expire in 2031, but it can only apply to states or local governments that are specifically drawn in under it.

** Section 2, which the Court said was affected “in no way” by the decision, applies permanently to every state and local government across the nation, forbidding discrimination in voting, but the government or a private challenger must prove that in each case, one at a time.

There is another provision of the law, potentially a back-up (Section 3), that allows the government to go to court to ask that a new state or local government be put under Section 5 because of its more recent history in dealing with minority voters.  Two states have been brought under Section 5 that way — Arkansas and New Mexico — along with several county governments, including Los Angeles County in California.   The Court’s main opinion did not even mention Section 3, but the dissenters referred to it briefly as a “bail-in mechanism” that has worked.  If a challenger now seeks to employ that provision, it presumably will have to show that bias is still a present-day problem there.

Chief Justice John G. Roberts, Jr., who wrote the Court’s main opinion in 2009 suggesting strongly that the 1965 law was vulnerable because it was no longer keyed to current discrimination experience, again was the author of the main opinion Tuesday.  It was joined in full by Justices Samuel A. Alito, Jr., Anthony M. Kennedy, Antonin Scalia, and Clarence Thomas.  Besides joining that opinion, Thomas wrote a separate opinion saying that he would also strike down the Section 5, pre-clearance provision, based on the same arguments that Roberts had used to invalidate the coverage formula in Section 4.

Justice Ruth Bader Ginsburg, in a strongly worded dissent that she recited from for ten minutes during the Court session, argued that “the Court errs egregiously by overriding Congress’ decision” in 2006 to extend the law for another twenty-five years (a renewal that was enacted without updating the coverage formula).  Ginsburg wrote that the decision “strik[es] at the heart of the nation’s signal piece of civil-rights legislation.”  The dissenting opinion was joined by Justices Stephen G. Breyer, Elena Kagan, and Sonia Sotomayor.

The Chief Justice recalled in the main opinion that the Court had voiced constitutional worries about the 1965 law four years ago, and then commented: “Congress could have updated the coverage formula at that time, but did not do so.”  That “failure to act,” Roberts went on, “leaves us today with no choice” but to declare Section 4 unconstitutional. “The formula in that section can no longer be used as a basis for subjecting jurisdictions to preclearance [under Section 5].”

While the opinion did not judge Section 5 itself, as this lawsuit had urged it to do, the language of the Roberts opinion in condemning the 1965’s obligations on covered jurisdictions was not much of an endorsement of that provision’s validity.   But it appeared that, after an extensive recital of constitutional grievances about the law’s main provisions, the Chief Justice — in order to hold together all of the five-Justice majority — narrowed the final focus to the validity of the Section 4 coverage formula.

If Congress can be persuaded, against the political odds, to craft a new formula, the Roberts opinion contained a strong cautionary note.  The Fifteenth Amendment, upon which federal bans on race bias in voting are based, “is not designed to punish for the past; its purpose is to ensure a better future,” it said.

Should Congress try again on defining a coverage requirement, the opinion declared, “Congress must identify those jurisdictions to be singled out on a basis that makes sense in light of current conditions.  It cannot rely simply on the past.   We made that clear [in 2009], and we make it clear again today.”

Although Congress, in extending the law in 2006, had examined a lengthy record that the lawmakers were satisfied showed that the problems of racial discrimination in voting remained concentrated in the states that already were covered by the Section 4 formula and thus obliged to obey Section 5 on preclearance, the Chief Justice directly disputed those findings.

“Regardless of how to look at the record,” the Court majority said, “no one can fairly say that it shows anything approaching the ‘pervasive,’ ‘flagrant, ‘widespread,’ and ‘rampant’ discrimination that faced Congress in 1965, and that clearly distinguished the covered jurisdictions from the rest of the nation.”

What Congress did in the extension law, the opinion commented, was simply to reenact a coverage formula “based on 40-year-old facts having no logical relation to the present day….If Congress had started from scratch in 2006, it plainly could not have enacted the present coverage formula.”

Disclosure: Goldstein & Russell, P.C., whose attorneys work for or contribute to this blog in various capacities, is among the counsel to Representative F. James Sensenbrenner et al., who filed an amicus brief in support of the respondent in this case.The author of this post is not affiliated with the firm, however.