Conceding that it is hard to draw the constitutional line, the Supreme Court on Thursday attempted once more to spell out when the government may use its money to try to control what people are allowed to say if they take the money.   Between the lines, the opinion seems to say that those who get the money can keep getting it even if what they say does not square with the government’s program goals. They just have to pay for such contradictions with their own money.

If that is the true meaning of the decision in Agency for International Development v. Alliance for Open Society International (docket 12-10), free speech under the First Amendment has made something of a gain. 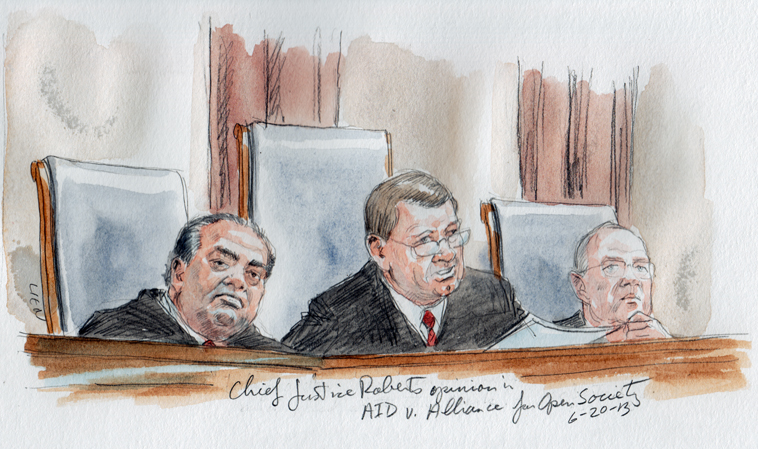 Chief Justice John G. Roberts, Jr.’s opinion for a six-to-two majority said that the government cannot impose a condition on receipt of government funds in a government program if that forces private groups to publicly express views on an issue that parrots the government’s views but is not what those groups themselves believe or want to say.  That, the opinion said, is a form of “leveraging” money to compel unwanted speech, and the First Amendment frowns on that.

The decision leaves no doubt that the government can tell such groups that they cannot use the federal funds they accept to cover the costs of speaking out in contradiction to the government’s views.   Such a restriction, the Chief Justice indicated, assures that the funds do not underwrite the contrary views.  But when the government seeks to control the recipient’s views on the policy issues, that pushes beyond the program’s limits and violates the First Amendment, the opinion concluded.

Here is the way the Chief Justice put that point: “By requiring recipients to profess a specific belief, the [command of what they can say] goes beyond defining the limits of the federally funded program to defining the recipient.”

Justice Antonin Scalia, writing in dissent for himself and Justice Clarence Thomas, said that “the real evil” of the ruling was that it barred the government from demanding a commitment from those who get public funds to carry out the policy views that are essential to the program.  “One can expect, in the future, frequent challenges to the denial of government funding” when the government seeks to further a specific ideological program, the dissent suggested.

The ruling dealt with a federal law implementing a large government program of trying to eradicate the global scourge of AIDS.  The government provides funds to groups that carry out, overseas, specific programs to reduce the risky behavior that is believed to help spread the deadly disease.

One of the conditions the government sets for getting any funds — and this was the only condition at issue before the Court Thursday — is that any organization getting federal funds must state that the organization explicitly opposes prostitution or other forms of sex trafficking.  In other words, the mandate compels the organization to publicly oppose any move to legalize or even to tolerate prostitution.

The organizations that challenged that mandate do not themselves actually favor prostitution or any other form of sexual exploitation, but they want to publicly remain neutral on that as a policy question.  If they declare themselves opposed, they argued, that will make it harder for them to work with at-risk groups like prostitutes, because the would-be helpers will be seen as adversaries.

Because of the government mandate, though, they simply were ineligible for any federal funds unless they publicly echoed the government’s anti-prostitution policy declaration.   Lower federal courts found that would probably violate their First Amendment rights of free speech, and the Supreme Court’s ruling established that it was, indeed, an unconstitutional condition.

The Court rejected an argument that the Obama administration had made in attempting to salvage the policy view mandate — that is, that an organization could get funds while following that mandate, but then set up an affiliate organization that would not share in the funds but could express whatever views it wished.

Such a two-organization approach, Chief Justice Roberts wrote, is sufficient as a First Amendment matter only if the organization is allowed to exercise its free speech rights “outside the scope of the federal program.”  But this won’t work, the Chief Justice added, when the organization getting the funds must “espouse a specific belief as its own.”   There is no alternative forum where it can state its views if they do not exactly square with the government’s, according to the ruling.

The policy declaration mandate, the opinion said, “goes beyond preventing recipients from using private funds in a way that would undermine the federal program.  It requires them to pledge allegiance to the government’s policy of eradicating prostitution.”

The Chief Justice’s opinion was supported by Justices Samuel A. Alito, Jr., Stephen G. Breyer, Ruth Bader Ginsburg, Anthony M. Kennedy, and Sonia Sotomayor.   Justice Elena Kagan did not take part, presumably because she had had something to do with the case in her former post as U.S. Solicitor General.

In 2003, as part of a broad federal effort to try to stop the spread of the AIDS disease worldwide, and to treat those already affected, Congress created a broad program of preventive, educational, and treatment programs, providing billions of federal dollars that private organizations would use to carry out the effort in specific activities overseas.

Because Congress believed that several forms of sexual trafficking, including prostitution, contributed to the spread of the HIV/AIDS virus, the 2003 law specified that any organization getting funds under the program must declare as its own policy view that it opposed prostitution and other forms of sexual exploitation.

Some of the private groups taking part in the program, however, have believed that, if they got out in public as themselves opposed to prostitution, it would inhibit their chances of working with prostitutes and with other at-risk groups.  While they do not themselves favor prostitution, they wanted to remain neutral on the matter, but that neutrality would not satisfy the mandate of the program to have an organizational policy against such sexual activity.

They contended that the funding condition sought to control their points of view, in violation of the free-speech guarantees of the First Amendment.  The Supreme Court on Thursday agreed with that argument.  It is one thing, the Court said, for the government to forbid these organizations to use the federal funds they receive to pay for public policy expressions that contradict the government’s policy goals, but it is another to try to take control of their right to frame and express their own views.   Such a viewpoint control approach, the Court concluded, is an invalid form of coercing private speech, and that violates the First Amendment.