We are happy to present the fourth interim Stat Pack for October Term 2012. This edition features both updates to the information featured in the third Stat Pack and a few new tables and graphs. You can download the full Stat Pack here.

Although Justice Scalia did not author any majority opinions in five-four cases during OT11 — despite being in the majority nine times — he has already authored two five-four majority opinions during the current Term. On the other hand, Justice Kennedy has not yet written any five-four decisions this Term, despite being in the majority in seven five-Justice majorities. Of course, that authorship role likely to increase as the Court nears the end of the Term and releases decisions in several high-profile cases. (Page 11). June is likely to be a month in which the Court is closely divided in many cases: during OT11, the Court released seventeen opinions in June, fourteen of which had at least one dissenting opinion.

Circuit Scorecard: The Sixth Circuit, which was affirmed only once in its twenty-three cases at the Supreme Court between OT08 and OT11, was reversed twice this Term in its only two cases at the Court. That brings the circuits record over the past five Terms to twenty-four reversals in twenty-five cases, a 96% reversal rate. The average for all circuits during the same time period is 74%, with the Sixth, Eighth (92%), and Ninth (80%) Circuits being reversed the most often and the First (40%), Tenth (44%), and D.C. (60%) Circuits being reversed the least often. (Page 3).

Pace of Opinions: The Court is falling behind slightly on its usual pace of opinions. Going into June, the Court has twenty-eight cases remaining for the Term. If previous trends hold true, it will also release one or more summary reversals before the end of June. 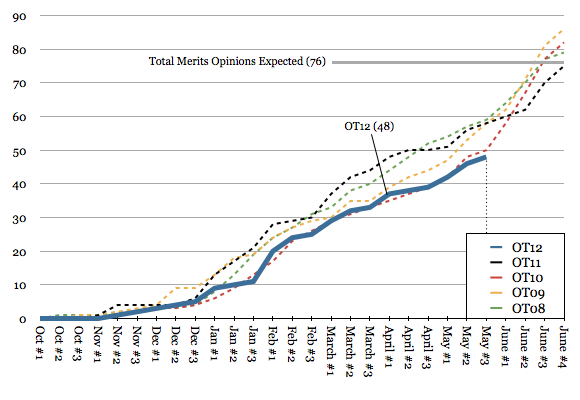 While the Court has quite a task ahead of it, releasing around thirty merits opinions in June is not unprecedented. During OT10 and OT09, the Court released thirty-three and thirty-two merits opinions, respectively, in June.

Time Between Grant and Oral Argument: This edition of the Stat Pack features small but important tweaks to the “time between” tables on pages 14 and 15. The most important change is the addition of cross-Term breakdowns for different time intervals. For example, the “Time Between Grant and Oral Argument” sheet now shows the number of cases that were argued less than one hundred days after being granted during the past three Terms, as well as the number that were heard in 100-124 days, 125-149 days, and so on. The table reveals that during OT12 the Court heard five cases less than one hundred days after they were granted, compared with only one such case during both OT10 and OT11.

The Court’s timetable for merits-stage briefing spans 112 days, so it generally tries to give counsel at least that much time between granting certiorari and arguing a case. Occasionally, the Court finds itself without enough cases to fill a sitting or the Term, so it will grant petitions and be forced to expedite the briefing schedule. This phenomenon most recently occurred in a large number of cases during OT07, when counsel in thirty-two cases had fewer than 112 days between the grant of certiorari and oral argument. More recently, during OT10, counsel in twelve cases worked on an expedited briefing schedule and, during OT11, counsel in only five cases were in the same position. During OT12, however, the Court required counsel in a staggering thirty cases (forty percent of all cases argued) to file at least one round of briefs sooner than was provided for in the rules.