Update on October Term 2012 and a new Stat Pack

We are happy to present the third interim Stat Pack for October Term 2012. This edition features updates for each of our charts, including the popular “Opinions by Sitting” table and Justice Agreement tables. You can download the full Stat Pack here.

Majority Opinion Authorship: Chief Justice Roberts and Justice Ginsburg have dashed ahead of their peers in the race to release opinions before the end of June. Both Justices have five majority opinions, compared to four opinions for Justices Scalia, Thomas, Breyer, Sotomayor, and Kagan. Justices Kennedy and Alito trail slightly with three majority opinions each. The Chief Justice and Justice Ginsburg, who have ten majority opinions between them, have written opinions in nine unanimous decisions and only one divided cases. Justice Kennedy is the only Justice who has not yet written an opinion in a case that was decided with a unanimous judgment.

Pace of Grants: The Court is following a strong pace of grants with 17 cases granted through April. In recent years, that pace is matched only by the rate at which cases were granted during OT10. 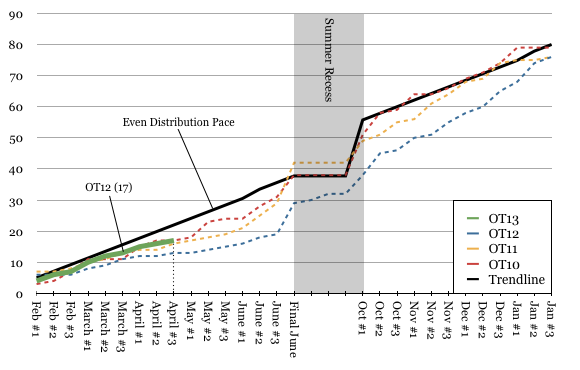 Pace of Opinions: In contrast to the strong pace of grants, the Court is following a more sluggish pace of opinions. It has released 39 merits opinions through April, including 36 opinions after argument and three summary reversals. Ironically, the slow pace of opinions for OT12 is matched only by the similarly slow pace paved during OT10. 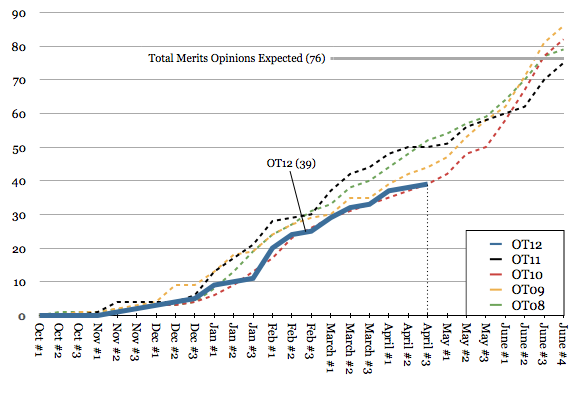 The fastest opinion so far this Term from argument to opinion has been Gunn v. Minton, which was decided in only 35 days. The slowest opinion has been Kiobel v. Royal Dutch Petroleum Co., which was decided in 198 days. Fisher v. University of Texas, the affirmative action case, is the oldest outstanding case; even if it is decided at the next opinion day, May 13, it will have taken 215 days between oral argument and opinion.

Advocates: The list of top advocates is filled with many of the usual suspects and features a few new faces. Solicitor General Donald Verrilli has argued more cases than any one else: 8. He is followed by Bancroft PLLC partner Paul Clement with 7 arguments and Principal Deputy Solicitor General Sri Srinivasan. Three advocates from private practice had 4 arguments: David Frederick, Gregory Garre, and Seth Waxman. Two advocates from private practice had 3 arguments: Lisa Blatt and SCOTUSblog’s own Tom Goldstein.

New faces on the repeat-player list include Michigan’s Solicitor General, John J. Bursch, who argued two cases this Term to bring his total to five arguments (all coming in the last three Terms). Bert Rein, a seasoned litigator and co-founder of the law firm Wiley Rein LLP, argued his first two cases before the Supreme Court during OT12 and also argued two of the biggest cases of the Term, Fisher v. University of Texas and Shelby County v. Holder.