Yesterday’s opinion in Bowman v. Monsanto Co. provided an anticlimactic conclusion to one of the highest-stakes cases of the Term.  The general question at issue is whether Monsanto can control what users do with the Roundup-resistant (“Roundup Ready”) soybean seeds that Monsanto has patented.  Specifically, the question is whether a farmer who buys Roundup Ready seed can use newly grown seeds for subsequent plantings.  Monsanto says no, arguing that the patent requires the farmer to buy seeds from Monsanto every year.  The Court firmly agreed, affirming the Federal Circuit, in a brief opinion by Justice Kagan for a unanimous Court. 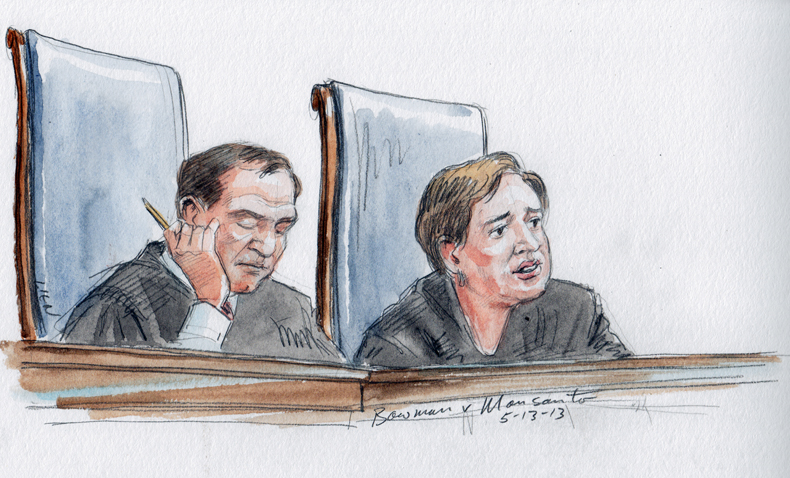 As the case came to the Court, the parties agree that ordinarily it violates a patent to make or use the patented invention without the owner’s consent (often granted in the form of a license).  The parties also agree on the major doctrinal exception, the doctrine of “exhaustion,” which holds that a patent holder’s rights in a particular patented object are largely “exhausted” by an authorized sale of that object: the purchaser has a free right to use and resell the purchased copy of the invention.

Bowman argues that the right to “use” the seed that he purchased necessarily included the right to plant the seed and its progeny – that is, after all, the natural use of seed.  The Court rejected the argument out of hand.  “If the purchaser of [the sold] article could make and sell endless copies, the patent would effectively protect the invention for just a single sale.”

The Court presumably was influenced by the severe consequences for Monsanto (and others like it).  The briefs of Monsanto and its amici had emphasized the high up-front costs of developing genetically engineered products like the Roundup Ready seed.  The Court commented:

Were the matter otherwise, Monsanto’s patent would provide scant benefit.  After inventing the Roundup Ready trait, Monsanto would, to be sure, receive its reward for the first seeds it sells.  But in short order, other seed companies could reproduce the product and market it to growers, thus depriving Monsanto of its monopoly.

The tenor of the Court came through most clearly when the Court ridiculed what it called Bowman’s “blame-the-bean defense” – the argument that Bowman did not make new seeds, because it was the seeds themselves that replicated.

The Court said relatively little about the questions lurking in the background about licensing, which are of particular importance to the software industry.  But it did comment on the reason why Bowman could plant the first seed (purchased from a Monsanto-authorized retailer) but not later seeds he purchased from a grain elevator (presumably produced by other authorized purchasers): “The difference between the two purchases was that the first—but not the second—came with a license from Monsanto to plant the seed.” More intriguingly, the Court also noted that a farmer who bought Roundup Ready seed from Monsanto would probably have an implied license to plant the seeds even if Monsanto neglected to provide one.

The case put a lot at stake for the biotech industry.  But in the end it did not change the status quo in any significant way.  A sigh of relief emanated yesterday from all in the industry.  A final word: it would be overreading this opinion to think it presages a pro-patent tilt relevant to the Myriad case in April.  As mentioned above, the Court emphasized the high up-front costs of producing innovations in this area, and had no reason to worry about those patents hindering follow-on research or the like.  In Myriad, that problem is of course front and center and plainly will influence the Court’s deliberations.

PLAIN LANGUAGE: Bowman v. Monsanto involves a patented seed made by Monsanto that makes crops resistant to the herbicide Roundup, which is used to kill weeds in the field.  The question in the case is whether a farmer who buys the seed can plant only the seed that he buys from Monsanto, or instead can also plant the produce of seeds purchased by Monsanto.  If the farmer is right, he can produce many generations of Roundup-resistant soybean plants simply by buying one season’s worth of seeds.  The Court agreed with Monsanto: the farmer can plant the first seeds, those he purchased.  But he can’t plant newly grown seeds again and again for years to go into the future.