Argument recap: Killing an argument in one easy blow

Sometimes the Supreme Court Justices can strain throughout an argument to imagine a hypothetical that gets to the heart of the case, and never quite come up with one — although the current Court’s imagination is rich with such scenarios.  But on Tuesday, a single, simple hypothetical said it all.  And in the process, it may have destroyed the government’s whole theory behind a criminal case.

It was Justice Anthony M. Kennedy’s suggestion to begin with, but then he and Justice Stephen G. Breyer worked it together to potentially devastating effect on the government argument that if someone uses threats to try to influence a lawyer’s advice, that is taking the lawyer’s property by extortion.  The case of Sekhar v. United States (12-357) tests that argument, and, indeed, it was sorely tested by the end of the hour — especially with Justice Antonin Scalia throwing a good measure of disdain. 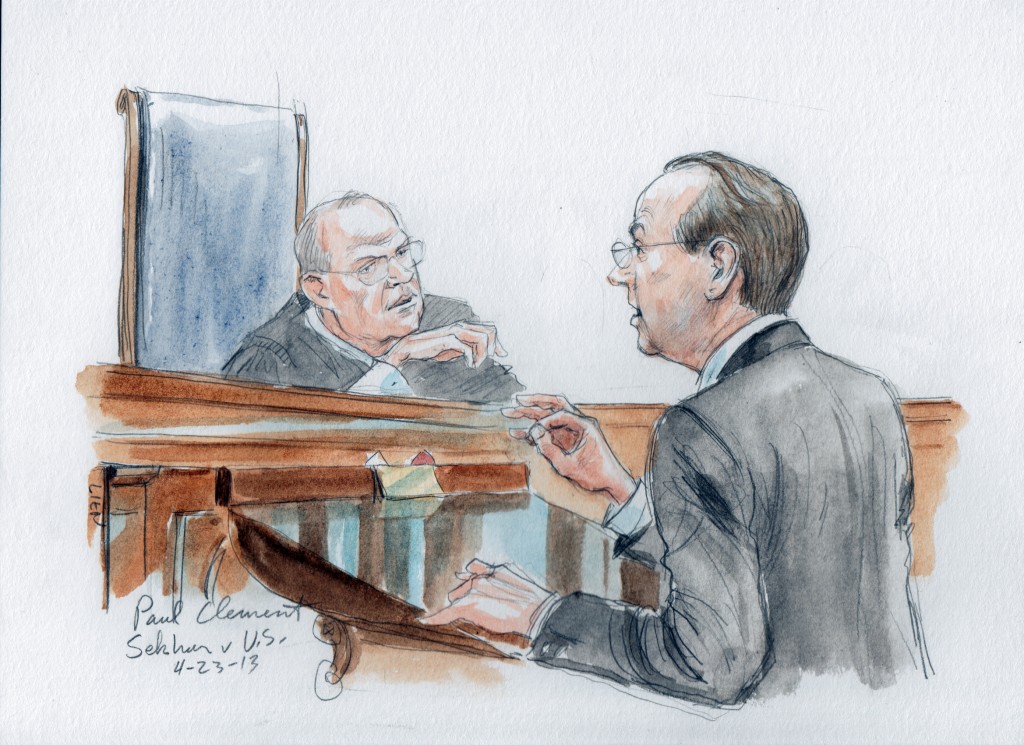 This case involves a Massachusetts financier who wanted a staff lawyer for New York State to put in a good word legally for a state investment that would benefit the financier handsomely.  The problem for the financier, Giridhar C. Sekhar of Brookline, was that he used threats to try to get what he wanted, and the government got him convicted for extortion under the Hobbs Act.

As the case reached the Supreme Court, the sole issue was whether any “property” had been taken by the financier from the state lawyer.  The government’s answer was, yes, the lawyer’s job of giving advice is property that belongs to the lawyer, and Sekhar was trying to take control of that and make it come out his way.

Sekhar started the case with what might well be a very strong advantage: his lawyer at the lectern was Paul D. Clement, the former U.S. Solicitor General who is, by common account, one of the best there is among the Court’s current crop of advocates.   With his usual deep preparation coupled with a completely confident and relaxed manner, Clement was having no trouble turning almost every question from the bench to his advantage.

There were a few efforts to challenge his claim that the government was trying to sweep too much into the Hobbs Act’s coverage — from Justices Elena Kagan and Sonia Sotomayor, in particular — but Clement got past those without departing from his constant theme that the government was over-reaching when it said that anything that has economic value is property under extortion law.

When Sotomayor, for example, suggested that Clement was trying to make one part of the Hobbs Act’s phrasing do the work that another was meant to do, Sekhar’s lawyer breezily suggested that he would be happy to have victory for his client on either one.

The Justices tried several hypotheticals, but none of them seemed to be working to enlighten the Court about the implications of the government’s thesis, and none had the effect of deflecting Clement’s verbal assault.  Indeed, by the time his first stint at the lectern was finishing, some members of the Court were helping him with his argument.

The harmony that seemed to have been building ended rather quickly when the government’s lawyer, Sarah E. Harrington, took her turn.  Within moments, Justice Breyer was telling her that the theory that legal advice is property “seems very far-reaching,” and might well not be what the Hobbs Act was all about, anyway.

It was at that point that Justice Kennedy leaned forward.  Suppose, he said, that a stenographer is typing up a letter about a lawyer’s recommendation and she was supposed to type that the lawyer had said No to a given proposition.  But someone used threats to get her to type, instead, the word Yes.  To suggest that someone was taking her interest in being honest, Kennedy said, was “very far-reaching.”

Harrington replied that she was not arguing that, in this case, there was an attempt to interfere with a person’s job, but rather “to dictate the substance of a decision” that had economic value to the person advising about that decision.

Justice Breyer immediately reinforced Kennedy’s hypothetical.   “What conceivable ground,” Breyer said, “is there for a definition so broad that it sweeps in all of the working people in the United States when they do their job.”

Harrington said that the point, as the government saw it, was that the extortionist was “taking control” of the property of the lawyer with the job of giving advice.  “I don’t know what that means,” Justice Scalia said sharply. “You’re just throwing words around.”

Scalia, who is very fond of interpreting law today by what it meant in common-law tradition, immediately demanded that Harrington cite one case under the common law that supported the government’s theory of property.   Harrington said “I can’t do that,” but offered a few citations on interpreting New York’s laws on property treating the right to run a business or the right to have  job as property as assets that could be taken unlawfully.

For a good while, Scalia charged ahead, assailing almost every subsidiary point that the government tried to offer.  Soon, Justice Breyer again brought up Kennedy’s stenographer scenario, and suggested that it was a difference between trying to influence what such an employee did with “three percent of her time” on a given day, and “trying to take control of Macy’s.”

The atmospherics, as well as the specific exchanges, were bearing down on Harrington, so much so that she confessed that she had lost one of the thoughts she had intended to put before the Court.   Trying to recover, she brought up some hypotheticals on her own: trying to influence how a plumber or a gardener fixed a leak or mowed a lawn was “taking control of their service” and thus interfered with a property right they had in that service.

Those offerings did not work for her.

Before long, Justice Kennedy was telling Harrington that “it is important that you can’t give us a common law case.”  And then Justice Scalia returned to the fray, and belittled the government lawyer’s attempt to suggest that forcing someone to marry a person they did not want to marry could be taking property from them.

And, just as she was about to sit down, Scalia told her “You don’t have to go this far.”  There were other provisions of federal criminal law that the government could have used in this case, he said, “instead of inducing us to define property as broadly as we can.”

When Clement got up for rebuttal, Justice Sotomayor said that, if the Court took his argument to its logical extreme, it would undermine lower court rulings that supported the government’s authority to go after mobsters, and particularly a Second Circuit Court ruling finding extortion in a gangster’s attempt to use a threat of force to take over someone else’s business.

Clement said that he had read that opinion, and suggested archly that it had been written by a federal trial judge sitting on the appeals court temporarily.  “This is not Marbury,” he commented, with a slight apology.  And when Sotomayor, a former trial judge herself, suggested that she was insulted by that comment, Clement simply moved on to suggest that the Second Circuit precedent actually supported his argument about the kind of property that the Hobbs Act was meant to insulate from extortion.