No matter how two lawyers tried to simplify their arguments before the Supreme Court on Monday, the Justices often acted as if there just had to be a way to reduce them down even more.  The Court seemed to be grasping for a way to understand more clearly the two stark alternatives it was being offered in the case of Agency for International Development v. Alliance for Open Society (12-10).

The case, superficially, seems uncomplicated, but it did not come out that way.  The government’s lawyer said Congress can require organizations that get federal money to espouse its views on the policy goals at stake, but the Court wanted to know where the limits were.  The challengers’ lawyer said Congress can’t force them to be its mouthpieces when the program is not about message but about doing the job, but the Court wanted to know whether the two were really separate. 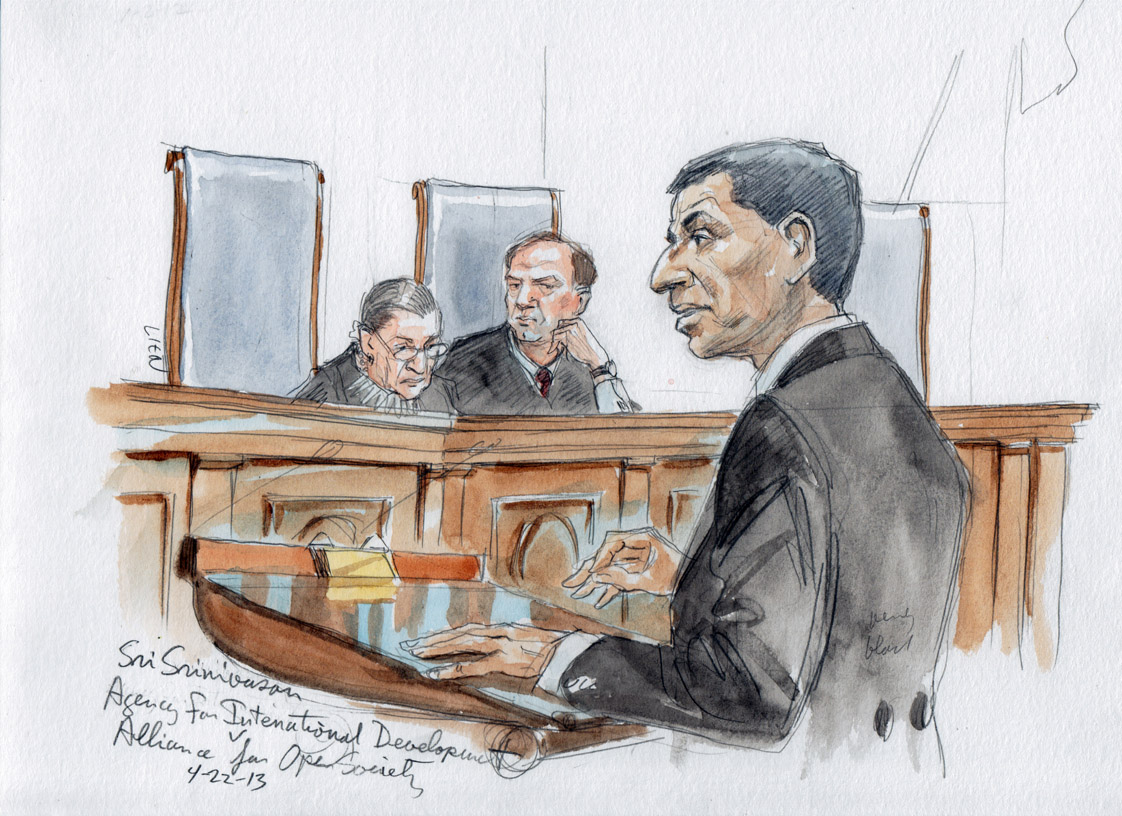 Sometimes, it is a bit easier to read the trend of an argument when the Justices ask harder questions of one side than the other, but each side on Monday was pummeled in turn, as the Court seemed dissatisfied with both offerings, as if they were not plain enough.  The overall tone reflected the uncertainty that hovers over the Court’s difficulty over the years in sorting out when government can attach conditions to its grants of money.

Deputy U.S. Solicitor General Sri Srinivasan, first at the lectern, started out with the simple contention that organizations that agree with the government’s anti-prostitution view will be better able to carry out the program to stop the spread of HIV/AIDS around the globe, so it should be able to direct its money to them.   A group is not forced to accept the government’s view — unless it wants the money, he said.

But Chief Justice John G. Roberts, Jr., immediately labeled the condition that Srinivasan was defending as “a loyalty oath,” which has a strongly negative connotation.   Roberts was at least implying that such a condition was a form of message control that was troublesome under the First Amendment.

The government lawyer tried to reassure the Court, saying that the policy embrace that Congress could constitutionally mandate had to be “germane” to the program’s objective, but he insisted that the anti-prostitution message was, indeed, germane to stopping the spread of the virus.

Justice Ruth Bader Ginsburg soon entered to suggest that the Court had never embraced “anything like this.”  Here, she said, the organization could only get money if it pledged that being against prostitution was its own policy, whether or not it was that group’s actual view.   Srinivasan answered by trying to make his argument simpler: the goal, he said, is not to change any group’s views, but rather to get organizations to “self-identify” with the government’s views.   It “makes all the sense in the world,” he said, for the government to prefer the one that is going to be more reliable and effective in carrying out the program.

Justice Samuel A. Alito, Jr., jumped in to say that it was “quite a dangerous proposition” to condition government funding on an organization’s agreement with the government’s view even if it does not agree with that.   Srinivasan replied that it was really only a matter of picking the best “partners” for the government in pursuing its program.

The government lawyer, answering a Ginsburg question, said the government needed an advance commitment about how its partners would carry out the government program, because monitoring what they actually did with the money once they started spending it overseas would be too difficult.

A moment later, Srinivasan had an exchange with Justice Stephen G. Breyer over whether an organization could take money for the HIV/AIDS program, obeying the message mandate, while setting up an independent entity that could say what it wanted about prostitution.  It simply would not work, Breyer contended, for the organization getting the money to express a policy against prostitution, but then to have an affiliate say: “Just kidding!”

The Justices tried various hypotheticals to try to get at the scope of the government’s message mandate, with Justice Breyer asking about how far the government could go to get the recipients of its money to have a policy on abortion that matched the government’s view, and Justice Alito wondering about the same thing on guns or health care.   Srinivasan struggled a bit with such scenarios, but returned to his theme that such conditions had to be “germane” to the program’s goals. 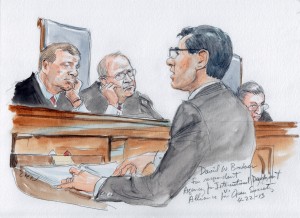 It was then the turn of the money-receiving organizations’ lawyer, Washington attorney David W. Bowker, and he, too, tried to start simply.   There was no doubt, he said, that the government could spend money on a program and “control the conduct” of those who take part in it, but it could not require them to “profess a particular belief” and refrain from private expression that differed with that belief.

Chief Justice Roberts suggested immediately, though, that the government “was just picking out who is an appropriate partner,” in this case to make sure that the recipients were opposed to prostitution.  Why, he asked, would the government sign up an organization that did not share the program’s objectives?   Bowker said the government was not just picking partners, because such a selection process would focus on whether an organization technically was competent to help stop the spread of the virus.  It was insisting, instead, on a message condition.

When Justice Anthony M. Kennedy wondered whether a member of Congress as a committee chairman could choose to vote for funding an organization because it liked that group’s views better, the organizations’ lawyer said Congress could pay for a particular program instead of another, but that Congress had done with the HIV/AIDS program was to “impose its viewpoint on the grantee,” and that would not be constitutional.

Justice Antonin Scalia a moment later pounced on that line of argument, asking why Congress could not prefer to give money to the Boy Scouts of America rather than to the Muslim Brotherhood.  It was meant, apparently, to be rhetorical question, because it was obvious that Scalia thought that would be permissible.   Bowker did not respond directly to the question, saying only that the Court had never allowed the government to make spending decisions “based on viewpoint.”

Here and there, Justice Sonia Sotomayor intervened to suggest that she kept “going back and forth” and was unsure “where to draw the line,” and that seemed to be a dilemma that most of her colleagues were also struggling to resolve.

Although Bowker was quite disciplined in staying with his core argument that the government cannot attach a viewpoint-embracing condition to its money, when that restraint actually goes beyond the needs of the program, it was not clear that the Justices could see such a clear distinction.   Justice Breyer, for example, suggested that there was no way to separate what an organization does with government money from what it was saying about the program.

Bowker, though, seemed to be thrown off-stride a bit when the Chief Justice asked a hypothetical question, apparently to illustrate the same point that Breyer had made about not separating performance and message.  In the hypothetical, Roberts said the government was funding the development of water resources in South Africa, and was pursuing the program to help eradicate a racist “apartheid” policy.  The Chief Justice wondered why the government could not prefer working with organizations that shared that view.

At first, Bowker repeated his view that the government could not make spending choices based on viewpoint, but then conceded that the Chief Justice’s hypothetical “was so much tougher” than the present case.  Trying to regain his footing, he said that, in this case, the government was imposing a viewpoint after selecting its partners and telling them “we want you to toe the line.”

But the Chief Justice persisted, saying that when the government went into Africa with its water program, the organizations were acting on behalf of the U.S. government and so an organization that did not share the anti-apartheid view would undermine the program, “just as here.”  Bowker conceded that the government might impose a message commitment in a case in which it had shown that an organization could not carry out a program effectively because of what it has said about policy.   The government, he said, had not done that in the HIV/AIDS program.

Before he finished, Bowker had moved back to his basic plea that the government could constitutionally impose a message commitment only if the program had organizations “speaking on the government’s behalf,” but otherwise “could not command fealty to the government viewpoint.”

Deputy Solicitor General Srinivasan, in his brief rebuttal, tried to draw a distinction between “imposing a viewpoint on an organization” and picking organizations “who will self-identify as having commensurate views.”  But Justice Alito promptly countered: “I don’t see the difference between those two things.”  If an organization once had supported prostitution, but needed government money to join in a program against HIV/AIDS, Alito commented, why isn’t it an attempt to change its views by making it “say ‘uncle'”?   The government, Srinivasan said, was not trying to impose a viewpoint.  What it was doing, he went on, was trying to get organizations to “self-identify” that they would be reliable partners in the program.

With the argument concluding on that point, it was not clear that the hour’s efforts had brought any new clarity to the constitutional dilemma.