The word “unprecedented”  has been used many times during the health care litigation to describe both the Affordable Care Act itself and the possible outcomes of the case. It could also be used to describe the line to get into the Court to hear oral arguments.  Below are a few photos from the line and notes on some of the people who were a part of it. 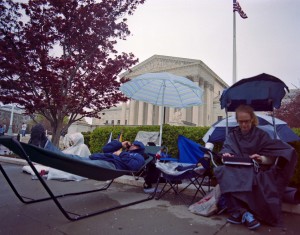 Kathie, a lawyer from Atlanta and the first person in the public line on Friday who was not a professional line stander, told me that she considered joining the Supreme Court bar to avoid the public line, but – because she thought it was unfair that bar members got their own line – ultimately decided to wait out in the cold and rain the way everyone else did. This was no small commitment considering that temperatures dipped down into the mid-thirties two nights in a row during her four-day wait. Where is the closest bathroom, you wonder? The Union Station Starbucks was the most popular one, but it closes at nine o’clock each night. The man pictured in the hammock next to her, Danny, was one of many professional line standers. When he isn’t standing in line, Danny is unemployed, so he was grateful to have the work outside the Court. 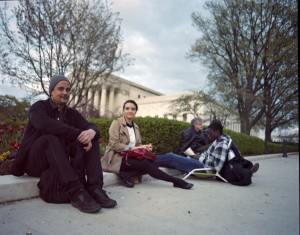 By Sunday evening, the public line had reached East Capitol Street – a distance of approximately thirty yards.  John, a manager for Linestanding.com, told me that the demand for professional line standers, which started as an off-shoot of the courier business twenty years ago, has risen with the tide of lobbying. There have been paid line standers for Supreme Court cases in the past, but John said that he had not seen anything like the frenzy around the health care arguments before. Interestingly, the line standers whom John manages operate as independent contractors and do not have health insurance. Sayri, sitting next to John, is a second-year law student who lives near the Court. She jumped in line when she saw how long it was getting and depended on a roommate to bring her supplies for the night. At the very end of the line when I took this picture around seven o’clock Sunday night was a high school student from Florida with his dad. They were “not necessarily” supporting their state’s challenge to the ACA; rather, they were on vacation and wanted to attend an oral argument. This was true of other people I met as well:  one woman was visiting from California and had been in line since three o’clock Saturday morning. She had not come to Washington planning to attend the argument or camp outside, but someone loaned her a towel and tarp, and she was near the front of the line on Tuesday. The experience made her want to get educated about the Act, and she said she was going to read the entire thing when she got home. 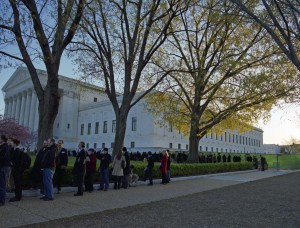 Shortly before the individual mandate oral argument, the public line and the lawyers’ line nearly merged. 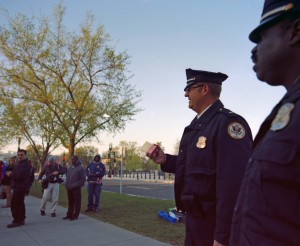 There were sixty closely guarded public tickets to each argument. [Correction 4/11 Daniel Rice, a Duke student who blogged about his experience waiting in the line, notes that there were actually 120 tickets for Monday’s argument.] 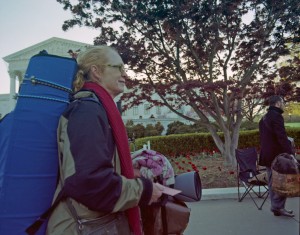 After a long wait, Kathie was the first in line for the individual mandate argument Tuesday morning. Monica, who blogs about the Court at Lovetheprocess3.blogspot.com and who had also been waiting since Friday, was second in line. 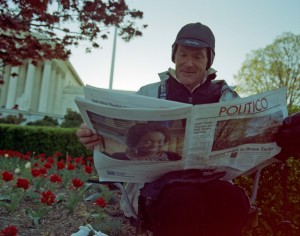 Kevin, one of the paid line standers, remained outside the Court reading about the mandate as others went inside to attend the argument. 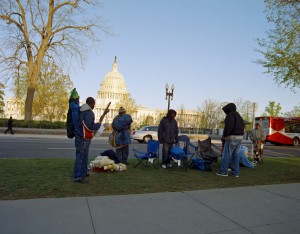 As the line standers were replaced by argument attendees, they decamped to the other side of the Court sidewalk. 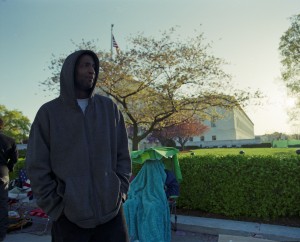 Nearly everyone that I spoke with in the line, whether paid line stander or argument attendee, echoed d’Angelo, pictured, who told me he was “here to be part of history.”

Posted in Health Care, Everything Else