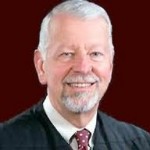 Officials of the state of California and of San Francisco on Thursday came to the defense of the federal judge who struck down the Proposition 8 ban on same-sex marriage, arguing that the ban’s supporters are trying to keep judges who are gay from ruling on cases involving gay sexual identity or gay rights.Â  In briefs (here and here) filed with a federal District judge in San Francisco, the officials argued against overturning the decision last August to nullify Proposition 8.

Last month, the supporters of the ban filed a formal request to “vacate” the decision by now-retired Judge Vaughn R. Walker nullifying Proposition 8 as a violation of the federal Constitution.Â  While contending that they were not challenging Walker just because he is gay, they argued that his impartiality is open to question because he might at some point want to marry his long-time gay partner, and thus benefit from the decision against the ban.

U.S. District Judge James Ware of San Francisco, who took over the case of Perry v. Schwarzenegger after Judge Walker retired from the bench earlier this year, had called for briefing on the motion to vacate.Â  The two same-sex couples who successfully challenged Proposition 8 in the case are due to file on Friday their reaction to the plea to vacate.Â Â  The Proposition 8 backers are due to file an answer by May 23.Â  Â Judge Ware has scheduled oral argument on the issue for June 13.

Although Judge Walker’s ruling is now under review in the Ninth Circuit Court, thatÂ did not prevent theÂ  Proposition 8 backers from challenging it in the new maneuver before Judge Ware.

California’s state Attorney General, Kamala D. Harris, representing state officials in the case, argued on Thursday that challenges like this one “threaten to subject gay and lesbian judges — indeed all judges — to ‘witch hunts’ concerning intimate aspects of their most personal and private lives.”Â  That was a reaction to the Proposition 8 backers’ argument that Judge Walker had an obligation to disclose, before trying the case, that he was involved in a long-term gay relationship so that parties in the case could have decided whether to challenge his impartiality.

“As the chief law enforcement officers of the state,” the attorney general’s brief said, these officials “are especially concerned at the precedent that might be set should this court rule that Judge Walker is subject to recusal because of his sexual orienation and the fact that he is in a long-term relationship.”Â  The challenge here, the brief added, “is similar to long-discredited efforts to bar black judges from adjudicating cases of race discrimination….Like race, gender, religion, and ethnicity, sexual orientation is simply irrelevant to whether a judge is qualified to hear a case, regardless of the subject matter or the identity of the litigants.”

While the Proposition 8 backers have insisted they are not basing their challengeÂ on Judge Walker’s sexual orientation, the state brief said, “that is precisely what [they] are seeking.Â  Judge Walker’s long-term, same-sex relationship is precisely and obviously an expression of his sexual orienation; it is sophistry to attempt to distinguish one from the other.”

The San Francisco brief, filed on behalf of the city and county, argued that the challenge by the Proposition 8 supporters was filed too late, and thus is not a proper legal move.Â Â Demands for a judge’s recusal from a case, tha brief contended, must be raised at the earliest possible time after the facts are discovered.

The proponents knew — long before they filed their motion to vacate — about Judge Walker’s same-sex relationship, the brief said, but they waited to challenge him until months after he had ruled against them, after he had retired from the bench, after an appeal challengingÂ his rulingÂ was fuly briefed and argued in the Ninth Cicuit, and after the Ninth Cicuit had raised questions about whether an appeal of Judge Walker’s ruling was allowed.

The recusal motion, San Francisco officials contended, seeks “a second bite at the apple after the trial judge has ruled and the Court of Appeals has questioned the viability of their appeal.”

Filing the motion to nullify the ruling months late, the brief argued, “raises the specter that the party does not fear bias at all but simply dislikes the outcome of the case and would prefer anoher bite at the apple.”Â Â  What the proponents have attempted, the brief added, is based on “strategic, rather than legitimate, reasons.”

Noting that the Proposition 8 backers had previously tried unsuccessfully to get one of the Circuit Court judges off the case as the appeal went forward, because of the judge’s wife’s activities, the San Francisco filing said that the two maneuvers made “plain that their purpose is not to achieve impartiality, but to avoid an unfavorable outcome.”

Suggesting that Judge Walker was being assailed only beause he is gay, the city-county document said that challengers were engaging in a presumption that a gay judge “will not fairly and impartially evaluate a claim involving gay people’s civil rights and will favor the gay over the non-gay party or position.”Â  That, the brief said, “would be as intolerable as making similar assumptions with respect to judges who are racial and ethnic minorities, women, Jews, Catholics and members of other social, political or civil organizations.”

If Judge Walker could be disqualified from hearing this case “because he has a same-sex relationship,” San Francisco officials asserted, “it it hard to see how any gay judges could hear any major civil rights case brought on behalf of gay people.”