The Supreme Court, in addition to the merits cases already scheduled for decision in the new Term, has stepped further into a new 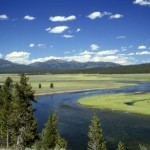 interstate water dispute that could be significant to western agricultural states that are chronically short of that precious resource.Â Â  On Tuesday, the Court ordered oral argument “in due course” — likely during the current Term — on a key aspect of the nearly four-year-old case of Montana v. Wyoming (137 Original).Â  The argument will be followed by a ruling on the merits, potentially influencing farm-irrigation operations on the Plains.Â  (Justice Elena Kagan is not taking part.)

The issue the Court agreed to consider is whether, under an interstate agreement on use of river water, an upstream state acts illegally when it uses more efficient irrigation methods that actually consume more of the water, leaving less to flow back into the river and on downstream to other states and their water users.Â  Montana, in its case filed directly in the Supreme Court in early 2007, argues that its rights under the Yellowstone River Compact of 1950 are being violated by irrigation practices now being used on the farms and ranches in Wyoming, upstream.

The Yellowstone River flows northward from Wyoming into Montana, then on into North Dakota before emptying into the Missouri River.Â  The dispute, as it is now unfolding in the Supreme Court, involves Montana’s claims only against Wyoming; North Dakota is in the case only because it is a member of the Compact.Â  Specifically at issue are the waters of two tributaries of the Yellowstone — the Tongue and Powder Rivers.Â  Wyoming tried to have the case dismissed, but the Court, as part of its order on Tuesday, denied that plea.

The Court ordered oral argument (without further briefing) on one of two objections that Montana made to a February “interim report” by the Special Master who is handling the case as a prelude to Supreme Court review — Stanford natural resources law professor Bradford H. Thompson, Jr.Â  That first objection is that Thompson was wrong in concluding that it did not violate Montana’s rights under the Compact for water users in Wyoming, while drawing the same amount of water out of the tributaries, to actually use it more efficiently and thus “deplete” more of it and deprive downstream users as a result.

When the Compact was entered 60 years ago, irrigation was mostly done by a method that flooded a crop field, with 65 percent soaking in or evaporating, leaving 35 percent to flow back into the source rivers.Â  Now, Montana has asserted, more efficient irrigation methods — such as sprinkling –Â  mean that 10 percent or less is left to flow back into the tributaries and downstream.

Special Master Thompson concluded that, since the Compact does not guarantee any state a set volume of water from the Yellowstone or its tributaries, a state making more efficient use of the water it draws does not violate the Compact.Â  That is the issue the Supreme Court is now scheduled to resolve.

Montana had also objected to another of the Special Master’s findings: that under Montana’s own state laws on water rights, it should attempt first to make up for its shortages of river water due to Wyoming’s efficiencies by requiring lower-priority users to give up some of their rights to higher-priority users, so long as that does not violate anyone’s rights.Â  Thompson indicated, though, that he needed more facts on that issue.Â  In Tuesday’s order, the Court sent Montana’s objection on that point back to Thompson for further review.

The U.S. Solicitor General’s office, taking part in the case at the Court’s invitation, had agreed with Thompson that Montana’s Compact rights were not violated by Wyoming’s new efficiencies in irrigation, and had urged the Court to send the whole case back to the Special Master.

Besides Montana’s complaint about the effect of the new irrigation methods on its water supply, it has leveled other theories of Compact violations at Wyoming.Â  The Special Master has ruled that those could go forward as the case proceeded before him.

When one state is allowed to sue another state directly in the Supreme Court, in an “original” lawsuit, that case is tried in the Court as if it were an original trial court.Â  However, the Justices usually transfer such cases to a Special Master, like Professor Thompson, to actually try the case and recommend a decision to the Court.Â  There is no time limit for final resolution of such cases, and, not uncommonly, they run on for years, as the Montana case already has.