UPDATE: This post has been updated to include photos of the ceremony. 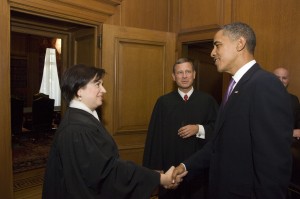 In an eight-minute ceremony, heavy with tradition and formal ritual, Justice Elena Kagan publicly became the 100th Associate Justice of the Supreme Court on Friday afternoon.Â  With President Obama, three retired Justices, and a courtroom-filling audience of lawyers and celebrities looking on, Kagan repeated an oath she had previously taken in private, then took her place as the junior Justice — on the far right of the bench, from the audience’s perspective.

Chief Justice John G. Roberts, Jr., twice welcomed the President, first saying a formal greeting, and then, more informally, “You’re always welcome here.”Â  There was none of the awkwardness that occurred at the President’s State of the Union message, when Obama upbraided the Justices directly about a campaign finance decision to which he was — and remains — firmly opposed.

The ceremony began two minutes late, with Kagan being escorted into the chamber to sit in front of the bench, in an antique chair used by the third Chief Justice, John Marshall, from 1819 on.Â  The President arrived three minutes later.Â  He had met briefly with the Justices in private before the ceremony.Â  (He met againÂ  with them after the ceremony had concluded.) During the ceremony, the President sat next to the three retired Justices — Sandra Day O’Connor, David H. Souter, and John Paul Stevens in the VIP seats on the courtroom’s right.

After Justice Kagan’s formal commission document was read, she was escorted to the bench, where she took the oath from the Chief Justice as the other Justices stood and watched.Â  Roberts welcomed her as “the 100th Associate Justice.”Â  There have been 17 Chief Justices.Â  Kagan said “Thank you,” and the ceremony ended.

Twelve minutes later, the Chief Justice and Justice Kagan appeared at the front of the Court building, at the top of the steps.Â  They then descended to the Court’s marble plaza, and remained for a few minutes for photographers.Â Â  A large crowd was on the plaza, behind police barriers.

The Court will go to the bench on Monday, for the formal opening of the new Term, with hearings beginning shortly after 10 a.m. 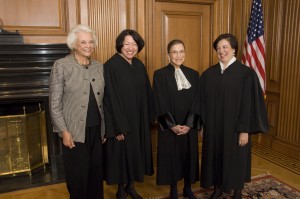 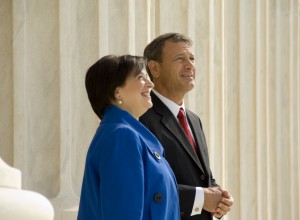 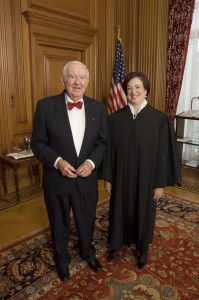 Posted in What's Happening Now, Everything Else