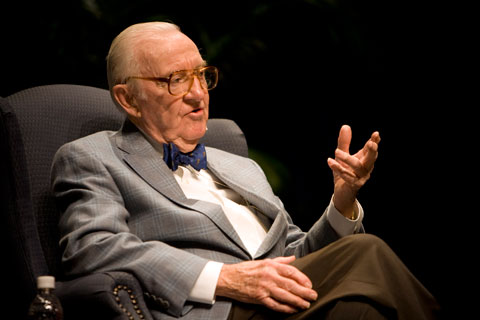 Photo courtesy of the University of Florida Levin College of Law

Tomorrow will mark Justice Stevensâ€™ ninetieth birthday, and on its eve SCOTUSblog kicks off a thirty-day series in his honor.Â Â For each weekday from now until the end of May, we will publish at least one post reflecting on Justice Stevens’ career and his impact on the Courtâ€™s jurisprudence.

Our contributors will include thirteen of his former law clerks, who worked for him over a quarter-century, two biographers, scholars, and journalists.Â Â The group includes leaders in private practice, government service, and academia.Â  Collectively they have observed Justice Stevens over his entire Supreme Court tenure.Â Â Some of the posts will focus on his life and personality, others on his jurisprudence.Â Â  The result, we hope, will be a rich portrayal of the Justice, by people who know him or his work well.

Links to posts in the series will be collected over time at the bottom of the inner right sidebar.

Authors who have written on Stevens: