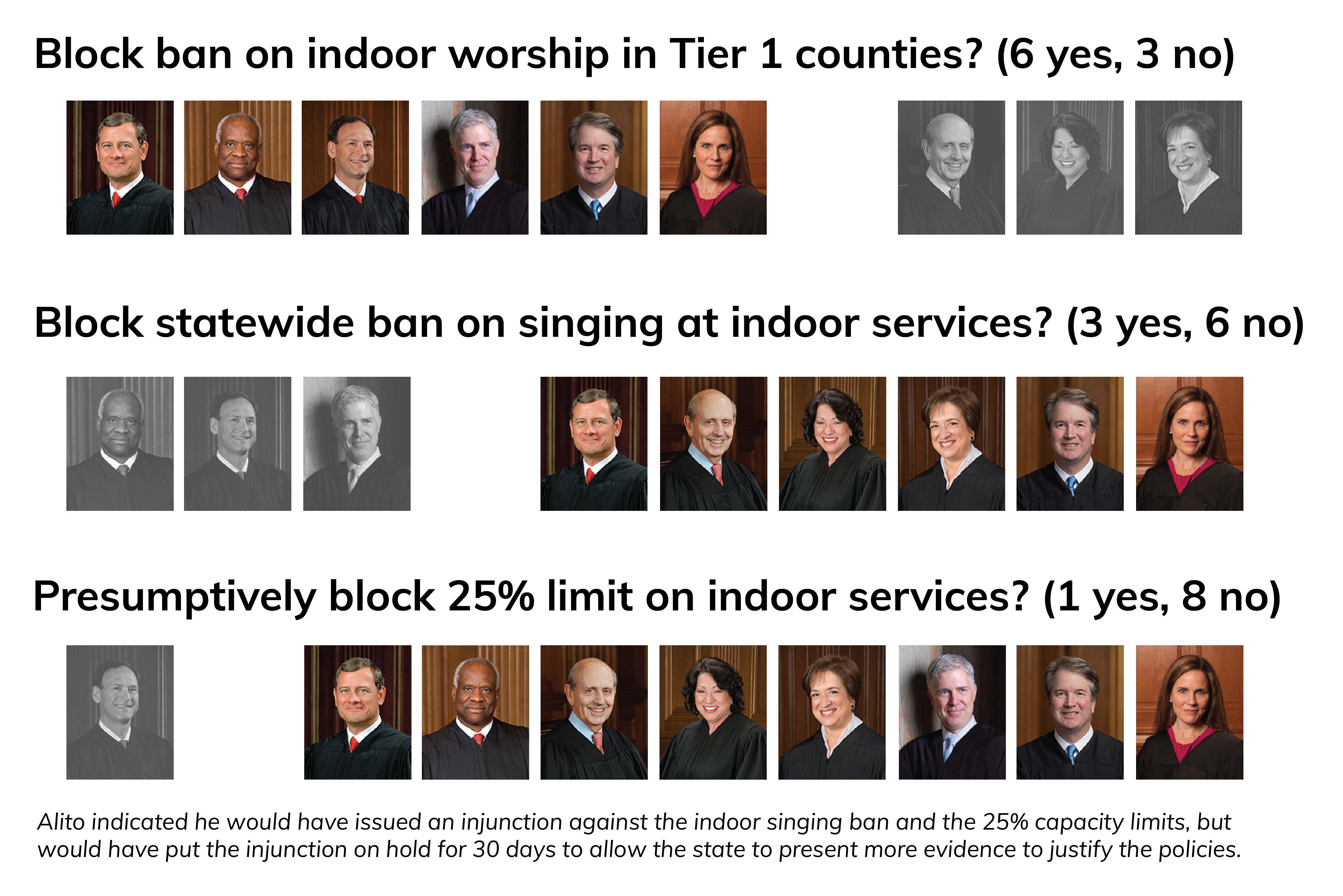 Late last Friday night, the Supreme Court granted an application for an injunction in South Bay United Pentecostal Church v. Newsom. In sum and substance, the court: (1) enjoined California from enforcing a ban on indoor worship, (2) did not enter an injunction with respect to the state’s enforcement of a 25% capacity cap on indoor worship, and (3) permitted California to prohibit chanting and singing at indoor worship services. The court further provided that South Bay United, a church located outside San Diego, could present “new evidence to the District Court that the State is not applying the percentage capacity limitations or the prohibition on singing and changing in a generally applicable manner.”

The ruling came in the form of a one-paragraph, unsigned order, followed by four separate opinions. None of those opinions commanded the support of more than three justices. As court watchers parsed the opinions and tried to count votes on each of the three substantive issues, there was some debate over how exactly the court divided. The question is not merely academic: Lower courts will need to apply the fractured ruling as this case and similar lawsuits continue to be litigated. (On Monday evening, the Supreme Court sent a different case challenging California’s worship restrictions back to the lower courts “for further consideration in light of” Friday’s ruling in South Bay.)

The greatest confusion relates to why there was not a majority to enjoin the capacity limits. The answer lies in the fact that the church’s application did not challenge those limits. It addressed only two restrictions: (1) the prohibition on indoor services in so-called Tier 1 counties (which have widespread COVID-19 infections and currently cover the vast majority of the state); and (2) the statewide prohibition on singing and chanting at indoor services. By contrast, the application itself did not challenge the 25% capacity limits (which by definition apply only where indoor services are permitted, i.e., outside Tier 1 counties) or seek any relief with respect to them.

The court’s order nonetheless addressed the capacity limits. But why? It was preemptive. Those immediately came into effect in Tier 1 counties as a result of the court’s order allowing places of worship in those counties to offer indoor services. So it appears that the court was attempting to give some guidance to the district court that there is no injunction on the capacity limits for the time being, but that the issue remains open to be litigated.

Here is the more detailed vote breakdown. Three justices – Chief Justice John Roberts and Justices Brett Kavanaugh and Amy Coney Barrett – stated that they concurred in the court’s order in full. Three justices – Justices Stephen Breyer, Sonia Sotomayor and Elena Kagan – would not have granted any relief to the church at all. Three justices – Justices Clarence Thomas, Samuel Alito and Neil Gorsuch – would have granted more relief. The vote was thus 6-to-3 to enjoin the indoor worship prohibition, and also 6-to-3 to allow the singing prohibition. Roberts, Kavanaugh and Barrett were in the majority in each.

The vote not to grant an injunction with respect to the capacity limits was 8-to-1: three justices would grant no relief at all, three justices expressly concurred, and two justices (Thomas and Gorsuch) said that the issue was not before them. Only Alito would have granted relief.

Here are the relevant details from each opinion. Both Roberts and Barrett issued short opinions that “concurr[ed] in the partial grant of application for injunctive relief.” Barrett (joined by Kavanaugh) noted that she agreed with an extensive opinion from Gorsuch except on one point: Unlike Gorsuch, she (and Kavanaugh) would not enjoin “California’s prohibition on singing and chanting during indoor services.”

Three justices would have granted additional injunctive relief with respect to the singing prohibition. Gorsuch (joined by Thomas and Alito) explained that the “case concerns the total ban on indoor worship” in Tier 1 and the ban on singing. He indicated that he agreed with the court’s order, except for a “quibble” over “singing.” He thought that it “appears” that the state was “playing favorites during a pandemic” because “California’s powerful entertainment industry has won an exemption” from the indoor singing ban.

But – and this is critical to resolving the uncertainty over the capacity limits –Gorsuch explained in a footnote that the church’s application had not challenged the capacity limits: “nothing in our order precludes future challenges to the other disparate occupancy caps applicable to places of worship, particularly in ‘Tiers’ 2 through 4.” Gorsuch accordingly did not say anything about the capacity limits.

Alito indicated that he would have granted slightly narrower relief than Gorsuch with respect to singing. He also would have gone on to grant narrow relief with respect to the capacity restrictions. Specifically, Alito would have granted an injunction “with respect to all of the capacity restrictions on indoor worship services and the prohibition against indoor singing and chanting” but would have stayed that injunction for 30 days to give the state time to “demonstrate[] clearly that nothing short of those measures” would suffice to fulfill the state’s interest in reducing the spread of COVID. It appears that Alito simply wanted to specify that he would have a single, coherent proceeding on remand regarding the singing prohibition and capacity limits, with the burden of proof on the state with respect to each.

Finally, Kagan (joined by Breyer and Sotomayor) explained that she would not have granted the application at all and would have allowed the state to leave all of the restrictions in place.