Argument analysis: Going the way of the phlogiston 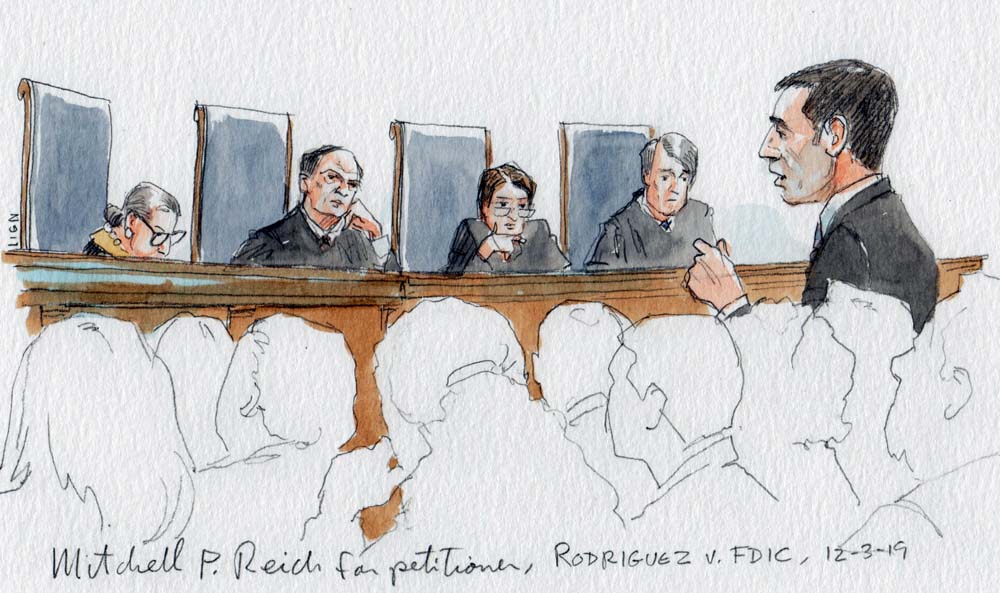 Rodriguez v. Federal Deposit Insurance Co. is no one’s idea of a blockbuster case. But yesterday’s oral argument in the narrow tax-refund dispute proved to be an unusually rollicking affair, with eight bursts of laughter, an out-of-breath chief justice and the second recorded discussion of phlogistons in the Supreme Court’s annals.

A “phlogiston,” for those unfamiliar with the principles of alchemy, is a fire-like element liberated during combustion. By the end of the 18th century, the phlogiston theory had been thoroughly debunked, and even earlier advocates of the theory came to concede that phlogistons were a fantasy. By the end of yesterday’s argument, the “Bob Richards rule” that the justices had granted certiorari to consider looked like it would suffer a similar fate. Indeed, Justice Stephen Breyer, who raised the subject of phlogistons, expressed doubt that any court had ever applied Bob Richards in the first place. “Now how do we know,” Breyer asked the FDIC’s attorney, that the Bob Richards rule “isn’t like phlogiston? How do we know it really exists?”

To the extent that courts do apply it, the Bob Richards rule is a federal common-law doctrine dictating that in the absence of an express or implied agreement, a tax refund arising solely from a corporate affiliate’s losses and income should be allocated to that affiliate even when the IRS pays the refund to a different corporate entity that filed a consolidated return on the affiliate’s behalf. Most tax practitioners and professors (including this writer) had never heard of the Bob Richards rule before the Supreme Court took it up in this case. The rule is cited a few times a year in bankruptcy cases, but for the most part it has lived in obscurity since the U.S. Court of Appeals for the 9th Circuit announced it in the 1973 case In re Bob Richards Chrysler-Plymouth Corp. And as yesterday’s oral argument indicated, the Bob Richards rule likely won’t live much longer.

The dispute in this case that (arguably) implicates Bob Richards springs from a $4 million federal tax refund paid to United Western Bancorp, Inc., or UWBI, a now-defunct Colorado-based bank holding company. Simon Rodriguez, the bankruptcy trustee overseeing UWBI’s liquidation, contends that the refund is UWBI’s property and should therefore be divided among the company’s creditors. The FDIC, which has assumed control over UWBI’s federally insured subsidiary United Western Bank, responds that the refund is the bank subsidiary’s property because the refund arose from losses and income that the bank subsidiary generated. The U.S. Court of Appeals for the 10th Circuit sided with the FDIC. Looking primarily at a contract between UWBI and United Western Bank, the appellate court said that UWBI had received the refund as United Western Bank’s “agent” and was obligated to remit it to the bank.

First up yesterday, in his Supreme Court oral-argument debut, was Hogan Lovells senior associate Mitchell Reich, representing Rodriguez. Reich quickly faced tough questions from Justice Ruth Bader Ginsburg, who doubted that the 10th Circuit decision rested on Bob Richards at all. “[I]t seems that the 10th Circuit, while it might have cited Bob Richards, was relying on contract interpretation,” Ginsburg remarked. The appellate court’s holding, she said, stood on Colorado state law.

Breyer and Justice Sonia Sotomayor both echoed Ginsburg’s observation. “[I]f they have made a mistake of Colorado law,” Breyer said of the 10th Circuit judges, “I guess there is a group that could answer that question. And they’re not sitting in front of you,” Breyer quipped. “They’re sitting in Denver.”

Reich responded that “the issue here is not simply that [the 10th Circuit] made a mistake of Colorado law.” Indeed, the court below said that it was applying “federal common law”—law made by federal judges rather than by Congress, agencies or the states. Although the 10th Circuit also said that it was interpreting the agreement between UWBI and United Western Bank in light of Colorado case law, the opinion below “doesn’t cite to any Colorado cases as to agency,” Reich noted. “So its entire mode of analysis was dictated by what it understood to be the federal common law rule.”

That seemed like it might be enough for Justice Brett Kavanaugh, who noted that “there’s a circuit split” as to the validity of Bob Richards. And that doctrine, Kavanaugh added, is “manifestly indefensible.” Kavanaugh suggested—and Reich agreed—that the justices could dispose of the case by saying that “the Bob Richards rule is not good law” and then sending the case back to the 10th Circuit to deal with the rest.

When Assistant to the Solicitor General Michael Huston, representing the FDIC, took to the lectern, the justices pressed him to concede that the Bob Richards rule is wrong. Chief Justice John Roberts, Justice Neil Gorsuch, Sotomayor and Kavanaugh all asked Huston in rapid succession whether he was disavowing Bob Richards. “I’m getting wheezy with this back and forth,” Roberts sighed.

Huston said he would be “perfectly comfortable” with a Supreme Court opinion eliminating Bob Richards, “but the last line of it has got to be that the judgment is affirmed.” In his view, the Bob Richards rule was irrelevant to his client’s victory in the 10th Circuit.

Several of the justices seemed skeptical of Huston’s suggestion. “[T]he Supreme Court of the United States is here to resolve circuit splits on questions of law,” Gorsuch emphasized. “We took this to decide the Bob Richards rule, whether it’s a thing. And both sides seem to agree that it is not a thing,” Gorsuch continued. He suggested that the justices should declare the Bob Richards rule dead and send the case back to the 10th Circuit to “do it properly.”

Huston’s refusal to defend the Bob Richards rule raised a concern for Justice Elena Kagan. “[M]aybe this isn’t a question. Maybe this is more in the realm of making a comment,” Kagan interjected. “And this is not on you, Mr. Huston. You have lots of bosses in the Solicitor General’s Office,” said the justice who is herself a former solicitor general. “But if you had said to the Court that you did not intend to defend Bob Richards,” she continued, “there is a pretty good probability that we would have thought that that was an appropriate place to appoint an amicus.”

Reich, for his part, warned the justices that declining to address the Bob Richards rule would lead to perverse incentives. The solicitor general’s office is a “sophisticated litigant,” he said, and “it certainly shouldn’t be encouraged for declining to answer what’s clearly the question presented.” Most members of the court seemed to concur with Reich’s assessment.

But for the FDIC, there was a silver lining. “[I]f Bob Richards did not put a thumb on the scale in [the appellate court’s] analysis,” Kavanaugh told Huston, “it’ll be easy enough for the 10th Circuit to say that on remand.” Kavanaugh added: “So you will end up getting the result you want from the 10th Circuit if they truly did what you think they did.” The Bob Richards rule, like the phlogiston, may well be relegated to the dustbin of bad ideas, and United Western Bank might end up getting its $4 million nonetheless.