Funding the one percent 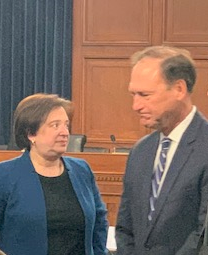 Justices Samuel Alito and Elena Kagan appeared this afternoon before the Subcommittee on Financial Services and General Government of the House Committee on Appropriations. They were invited to discuss the Supreme Court’s budget requirements for fiscal year 2020, but they also fielded questions about cameras in the courtroom, law clerk diversity, partisan attacks on the judiciary, and the #MeToo movement. Perhaps most notably, Kagan disclosed that Chief Justice John Roberts is studying a code of conduct that would apply only to the justices, who are not bound by the code of conduct that applies to other federal judges.

The chair of the subcommittee, Mike Quigley, D-Ill., opened the hearing by noting that it was both the first time that Kagan and Alito had appeared before the subcommittee and the first public budget hearing for the court since 2015. But Quigley suggested that he intends to hold public hearings more often, describing the hearings as a way for the public to learn more about the judiciary. Quigley added that he was “always impressed with the court’s dedication to cost containment.” And when Alito accidentally broke a water glass, Quigley quipped that he was “still impressed with the court’s dedication to cost containment.”

Alito made an opening statement in which he observed that the federal judiciary’s budget “is small compared to the overall federal budget, representing less than two-tenths of one-percent of federal spending.” And the Supreme Court’s “request, in turn, represents only 1 percent of the Judiciary’s budget.”

Alito countered that the Supreme Court is substantially more accessible than it was when he began practicing law: Opinions are available on the court’s website almost immediately after they are released, and transcripts are released shortly after oral arguments, with audio following at the end of the week.

Alito acknowledged that “most people think arguments should be televised, including most of the members of my family.” Indeed, he continued, he voted to televise arguments when he was a judge on the court of appeals. But once he joined the Supreme Court, his views shifted, and he fears, for example, that lawyers would try to work soundbites into their arguments in the hope of getting on the evening news.

Kagan called the question of cameras in the courtroom a “very difficult” one. On one hand, she observed, having cameras in the courtroom would allow more members of the public to see the justices at work, and she believes that the court as an institution functions very well. But she agreed “wholeheartedly” with Alito that the top priority is that the court must continue to function as an institution, and she worries that cameras might interfere with the court’s ability to function well.

More generally, Kagan emphasized, the court provides reasons for all its decisions. The public always – or at least almost always – knows why the court makes a particular decision, and the arguments actually play a limited role in the court’s decision-making process.

Security was also front and center at the hearing. As Alito’s statement explained, the court had requested a “substantial amount of additional security funding” for fiscal year 2019. Rep. Matt Cartwright, D-Pa., asked Kagan and Alito whether the 2020 budget properly covers the court’s security needs.

Alito answered that it does, while Kagan added that the chief justice had hired security consultants, who have talked to everyone in the building about current security practices. The court is letting the review process go forward before hiring more security staff, she explained.

The discussion of security led to a broader question about threats to federal judges, and one committee member mentioned the photo, posted on Instagram by Roger Stone, of U.S. District Judge Amy Berman Jackson, with a target in the corner. Should Congress consider increasing security funding for other federal judges in 2020?

Alito demurred at first, but then noted that as a former federal appeals court judge, he is very cognizant of security needs at those levels. In some ways, he observed, the security needs of lower-court judges can be more serious because those judges have more contact with members of the public, and they are often involved in cases in which emotions run very high.

Kay Granger, R-Tex., asked Kagan about another perennial hot topic: the fact that the court is hearing fewer cases than it once was. Are there additional worthy cases? Granger asked.

Kagan responded that all the justices, at least in the abstract, believe that the court could take more cases – for example, 90 instead of 70. But when we apply the criteria that we use to decide whether to take up a case, she explained, we don’t find 90 cases to take. “There’s been a lot of ink spilled about why” the court isn’t taking more cases, she continued. It’s not because the court wants to take fewer cases, Kagan explained. It’s just that when we apply those criteria, she concluded, we’ve ended up with about that many cases.

Kagan responded to a question from Rep. Sanford Bishop, D-Ga., about law-clerk diversity by describing the issue as one that “I believe we take very seriously.” Kagan noted that the current crop of law clerks is significantly more diverse, at least by race and gender, than when she clerked on the court in the 1980s, but she acknowledged that there is still more work to be done. In particular, Kagan suggested, the “pipeline” that sends clerks to the court – law firms, law schools and clerkships on the courts of appeals – needs to be more diverse.

Bishop also asked the justices to respond to attacks on the court and the federal judiciary, including by President Donald Trump. Do you believe, he asked, that such attacks undermine respect for the court?

Alito answered only indirectly, telling Bishop that it is “extremely important for all of the members of all three branches of our government to be accurate and respectful” when talking about other branches.

Rep. Norma Torres, D-Calif., pressed the justices about whether allegations of ethics violations and particularly sexual misconduct can be properly investigated at the Supreme Court when the justices are not bound by the code of conduct for federal judges. “Women all over the world are finding their voice,” Torres proclaimed, and “it cannot stop at the Supreme Court.”

Kagan indicated that Roberts is studying a code of conduct that would apply to the Supreme Court, and she noted that Roberts has been “very proactive” in getting a working group together to deal with issues relating to sexual misconduct in the judiciary. In particular, she explained, the final recommendations will make clear that the confidentiality of a judge’s chambers will give way when someone reports sexual misconduct.