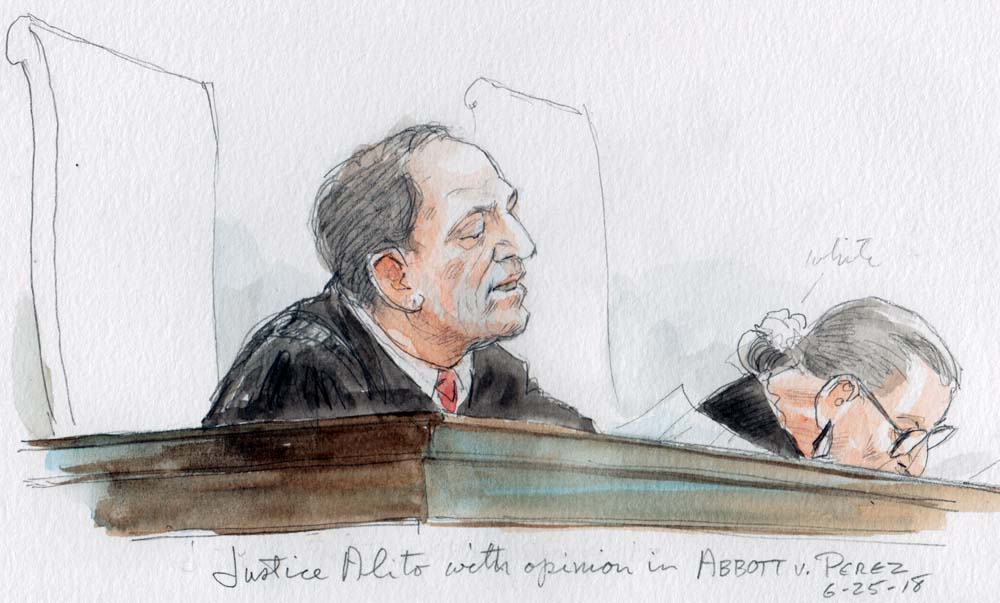 This morning the Supreme Court ruled in favor of Texas in a dispute alleging that the state’s lawmakers had drawn redistricting maps to discriminate against some of the state’s black and Hispanic residents. By a vote of 5-4, the justices threw out almost all of a ruling by a three-judge federal district court that would have invalidated the maps, agreeing with the lower court only that one state legislative district was a racial gerrymander. Today’s ruling means that elections this year will likely go forward using the existing maps.

The decision came in the two cases known as Abbott v. Perez, which date back to 2011, when Texas’ Republican-controlled legislature began to redistrict after the 2010 census. The legislature’s federal congressional and state legislative maps never took effect, because a three-judge district court (which normally hears redistricting cases) barred the state from using the maps and created its own plans instead. But the U.S. Supreme Court threw out the court-created maps in 2012, telling the lower court to use the state legislature’s maps as a “starting point” for new maps. The district court did so, and in 2013 the state legislature adopted the maps for permanent use.

Last year the district court ruled that parts of the 2011 federal congressional maps violated the law because one district diluted the votes of Hispanic residents, while a second was the product of racial gerrymandering. The court also found vote dilution in the state legislative maps. A few months later, the court weighed in on the 2013 plans, holding that because they perpetuate the discrimination found in the 2011 maps, they too violate the law. After the state indicated that it would not redraw the plans to fix the violations that the court had found, the court ordered hearings on new plans. The state asked the U.S. Supreme Court to step in and block the lower court’s orders, which the justices agreed to do last year.

Justice Samuel Alito wrote for the majority, in an opinion joined by Chief Justice John Roberts and Justices Anthony Kennedy, Clarence Thomas and Neil Gorsuch. Alito began by rejecting the challengers’ contention that the Supreme Court lacked the authority to review the case at all because federal law only gives the court the power to hear appeals from a three-judge district court that either grants or denies an injunction – which, the challengers argued, the district court’s orders were not. Even if the district court had not specifically labeled the orders at issue in this case as “injunctions,” Alito explained, the real question is whether the orders had the “practical effect” of an injunction. And these did, he reasoned, because the orders not only found violations of federal law and the U.S. Constitution but also required the state to quickly notify the court whether the state legislature would meet to fix the violations. “The short time given the Legislature to respond,” Alito posited, “is strong evidence that the three-judge court did not intend to allow the elections to go ahead under the plans it had just condemned” – which, “for all intents and purposes, constituted” injunctions against the state.

Alito then turned to what he characterized as the main question on the merits of the state’s appeal: whether the district court was wrong “when it required the State to show that the 2013 Legislature somehow purged the ‘taint’ that the court attributed to the defunct and never-used plans enacted by a prior legislature in 2011.” According to Alito, the district court’s analysis was exactly backward: Even if a state has been found to have discriminated in the past, he observed, there is still a presumption that it acted properly in drafting later redistricting plans. This means that the plaintiffs challenging a redistricting plan still have to show that the legislature intended to discriminate when it enacted the current plan.

Alito acknowledged that the intent of the Texas legislature when it enacted the 2011 plan was something that a court could consider, and he added that the mere fact that the 2013 plans largely mirrored the 2012 interim plans adopted by the court did not immunize the 2013 plans from a challenge. But when all of the evidence is considered together, Alito concluded, it does not show that the legislature intended to discriminate against minority voters. If anything, Alito stressed, the available evidence suggests that the legislature did not intend to discriminate, but instead adopted the 2013 plans because it had been advised that doing so was the best way to end the “expensive and time consuming” litigation over the redistricting plans.

The majority’s holding that the district court had applied the wrong test resolved almost all of the case in Texas’ favor, leaving only four districts that the district court had invalidated for reasons other than discriminatory intent. Here the majority reversed the district court’s holding that three of the districts diluted the votes of minority voters, but it upheld the district court’s ruling that a state legislative district in Tarrant County was the product of racial gerrymandering. The legislature had “substantially modified” the Tarrant County district in 2013, and the state contended that it had done so to comply with the Voting Rights Act. But the reasons that the state cited to justify its decision to focus on race in drawing the district were “simply too thin a reed to support the drastic decision to draw lines in this way,” Alito concluded. The court therefore sent the case back to the lower court, presumably for it to apply the correct test to the districts that it had previously struck down.

Justice Sonia Sotomayor dissented, in an opinion joined by Justices Ruth Bader Ginsburg, Stephen Breyer and Elena Kagan. Sotomayor would not have reached the merits of the challenges at all, because in her view the lower court’s orders did not grant or deny an injunction. And she lamented the majority’s ruling to the contrary, predicting that the court’s docket will soon be “flooded by unhappy litigants in three-judge district court cases, demanding our review.”

In a blistering final paragraph that closed with the phrase “I dissent,” rather than the “I respectfully dissent” often used by the justices, Sotomayor protested that today’s ruling “does great damage to” the right “to equal participation in our political processes.” “Not because it denies the existence of that right, but because it refuses its enforcement. The Court intervenes when no intervention is authorized and blinds itself to the overwhelming factual record below. It does all of this to allow Texas to use electoral maps that, in design and effect, burden the rights of minority voters.”