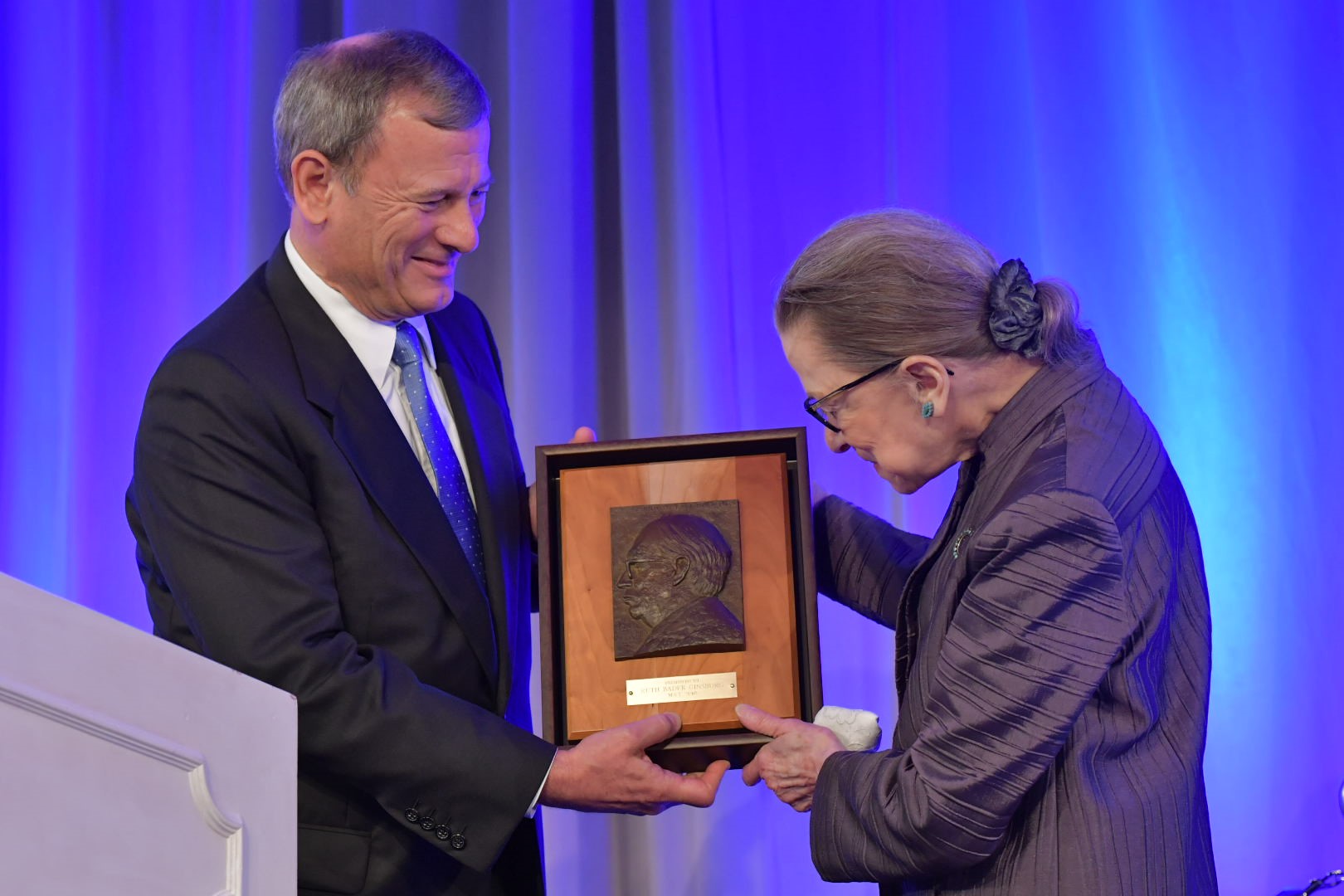 This afternoon Justice Ruth Bader Ginsburg received the Henry J. Friendly Medal from the American Law Institute. The medal “recognizes contributions to the law in the tradition of Judge Friendly,” whom Chief Justice John Roberts today called “the greatest American judge never to serve on the Supreme Court.”

Roberts undertook “the happy assignment” of presenting the award to Ginsburg and – as he informed his colleague – contributing to “this effort to increase your public profile.”

The audience laughed at this reference to Ginsburg’s rise to cultural stardom, which includes a new documentary celebrating her life. Ginsburg herself, after receiving the award, gave “a word about the notoriety I have received: It is amazing.” 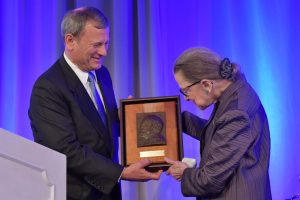 Among his plaudits for his fellow justice – who knows “nothing about football and more than is reasonable about jabots” – the chief justice highlighted Ginsburg’s writing speed. Roberts said Ginsburg is often the first to finish her opinions for each argument sitting – even when he has assigned her tough cases to avoid making others appear too slow.

Roberts told a story in which then-Judge Ginsburg of the U.S. Court of Appeals for the District of Columbia Circuit applied the standard for Section 1983 claims by prisoners that Friendly had articulated in Johnson v. Glick. At the urging of her colleague, Judge Robert Bork, Ginsburg sent her decision to Friendly. The distinguished judge replied that Ginsburg had grasped “precisely what I was endeavoring to say” and called her “an upcoming star.”

Indeed, as the chief justice noted, Ginsburg by that point already had a distinguished career as an academic and as a litigator with the American Civil Liberties Union.

Ginsburg told a story of observing her late husband, Marty Ginsburg, argue a “complex” tax case involving corporate bonds in front of a 2nd Circuit panel that included Friendly. According to the justice, Friendly “zeroed in on the best argument for the government, but one the government did not make.” Marty ended up convincing the two other judges on that panel, as well as the Supreme Court, but not Friendly — who Marty secretly knew “had it right.”

Ginsburg declared that the federal judiciary “faces a threat,” one that “lawyers who care about the health and welfare of the federal courts can help to counter.”

She noted that her late friend, Justice Antonin Scalia, had been confirmed by a unanimous Senate vote. Her own vote was 96-3, and she said that she did not face questions from the Senate Judiciary Committee about her involvement with the American Civil Liberties Union.

Ginsburg did not mention the contentious confirmation of her most junior colleague, Justice Neil Gorsuch. Wearing a “dissent jabot,” the clothing choice Roberts referenced in his remarks, Ginsburg dissented this morning from Gorsuch’s opinion in Epic Systems Corp. v. Lewis.