Empirical SCOTUS: Out of steam or out of time 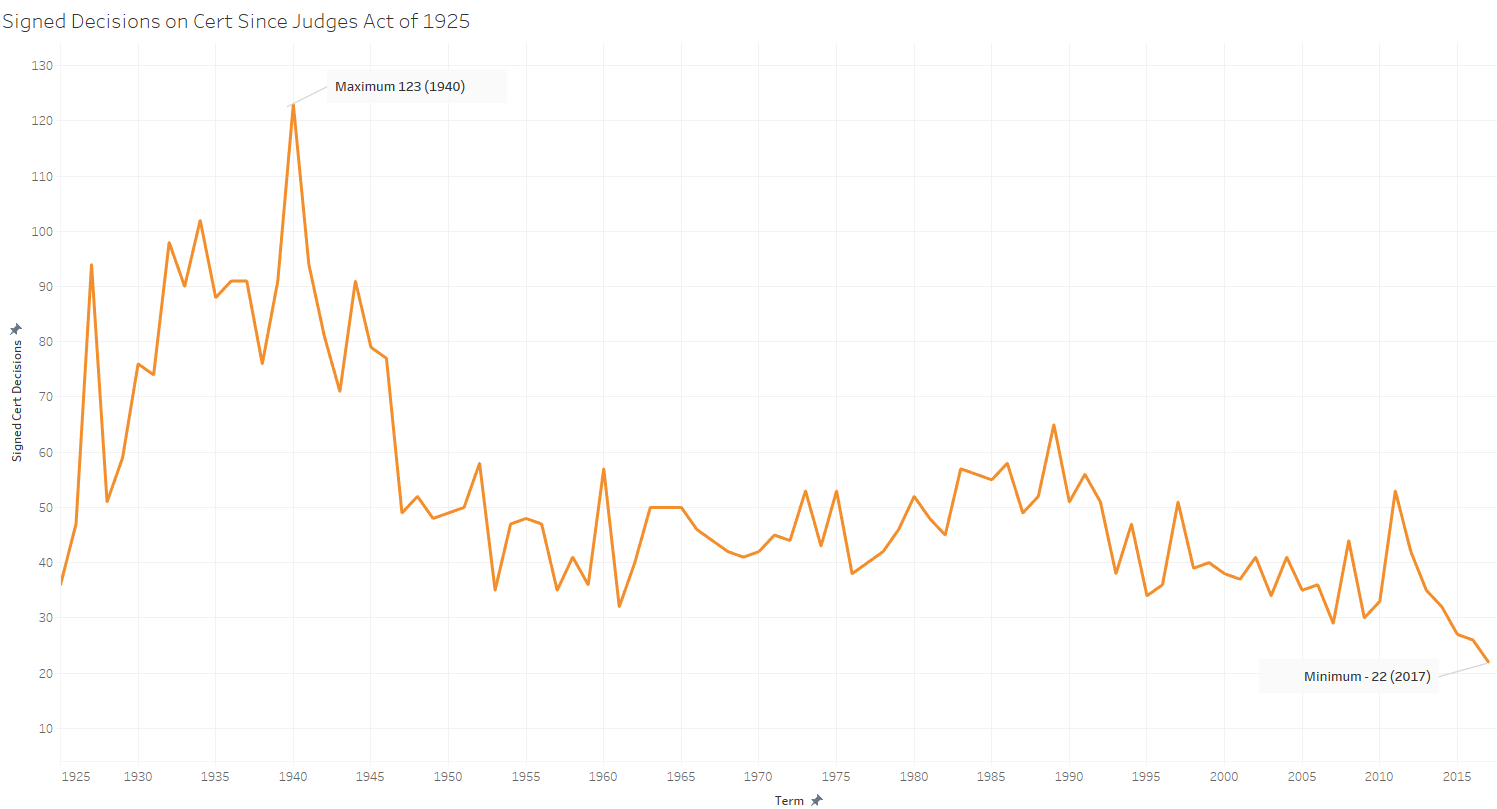 For those following the Supreme Court, the notion that the court is moving slowly this term has already been reiterated multiple times. The first clear notion of the court’s historically slow pace came with the timing of this term’s second signed decision, which was the modern court’s latest second opinion released in a term. Other analyses followed in legal periodicals, as well as those directed at a more generalized audience. Now that we are closer to the end of the term, some aspects of the justices’ decision-making this term are more apparent, as are explanations for the court’s pace. The bottom line is that this pace should not be unexpected, because the court has been moving in this direction for years, and a confluence of events have now come together to help precipitate this term’s “snail’s pace.”

First, a look at the court’s relative pace so far this term. This helps to show where the court’s progress this term fits into context with other terms. It also clarifies how the court is still moving at its slowest pace in modern history at least by several metrics. The top chart shows the court’s decisions in cases taken by writ of certiorari through April of each term since certiorari became the main and preferred method of the Supreme Court’s jurisdiction in 1925. The bottom chart shows the court’s number of signed decisions through April of each term since 1900. 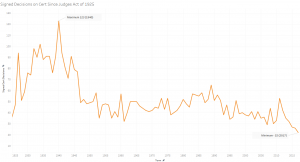 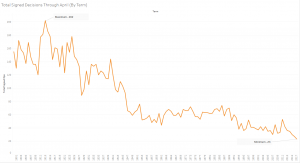 Whether with the 22 opinions this term in the top chart or the 23 opinions this term in the bottom chart, the court is four signed decisions behind its slowest pace in either graph. The slowest pace previously was (not surprisingly) last term. Last term, the lack of a ninth justice helped to explain the low output and slow pace. This year, the court has two other, related explanations: inertia, and the acclimation of a new ninth justice. The inertia explanation may be apparent from both graphs above or from the Federal Judicial Center’s various graphs of the court’s opinion output by term.

Fitting a new justice into the mix

When Justice Neil Gorsuch joined the court, early analyses dubbed him the “new Scalia.” The reason for this description was readily apparent. When he participated in cases during the 2016 term, Gorsuch sided overwhelmingly with the conservative members of the court and perfectly aligned with Justice Clarence Thomas. This also led him to a very conservative ideological score for the term based on the justices he aligned with on merits votes most frequently. The justices’ relative ideological positions for the 2016 term are shown below with their Martin Quinn Scores (liberal scores are to the left and conservative ones are to the right).

Due to a voting pattern similar to those of the other right-wing members of the court, Gorsuch appeared to be the second most conservative justice last term. Because he only voted in a handful of cases last term and, unlike the rest of the justices, had no prior voting history, his relative position was only a best-guess approximation.

If Gorsuch were as predictable a conservative vote as Thomas and Justice Samuel Alito, perhaps the court’s pace this term would not have been as slow. Just looking at Gorsuch’s votes in signed decisions, though, he is currently more toward the court’s center. In fact, as the graph below shows, based on his voting alignments in all signed decisions in which he participated, Gorsuch’s voting behavior is most similar to those of Chief Justice John Roberts and Justice Anthony Kennedy. 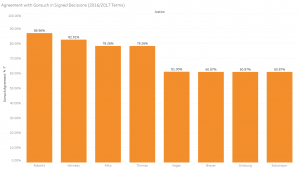 Gorsuch’s distance from the court’s liberals clearly still aligns him with the more conservative justices, but possibly not as much as one might have previously expected. Specifically, Gorsuch helped muddy up previous expectations of his voting alignment with his opinion in Sessions v. Dimaya giving the court’s liberal wing a five-justice majority.

In reality, this has been a muddy term for the Supreme Court as a whole, and this might be hampering the court’s output. As the graph below shows, the Roberts court has never had as many majority decisions through April with a minimum number of justices in the majority as it has this term. 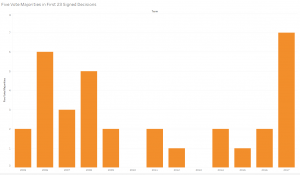 Because the court has had only eight members vote in a handful of cases over the years, including many decisions after Justice Antonin Scalia died and before Gorsuch joined the court, 5-3 splits are included in the above graph as well.

This term in context

This level of disagreement among the justices may well have slowed down their decision-making. The difficulty of finding consensus is also apparent in other ways. This is the only term since Roberts joined the court in which the court has had four different justices assign a majority opinion through April. 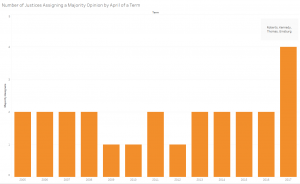 This too shows the shifting majorities in the court and underscores the complexities of the justices’ alignments so far this term. 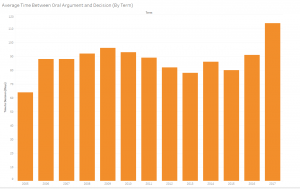 In the above graph, the court’s average pace through April is head and shoulders above that of any other term in the Roberts-court years. This stems in part from the time the court took between oral argument and a decision. With Kennedy’s decision in Jesner v. Arab Bank, a case argued early in October, the court took the longest time under Roberts to reach a decision in a case decided through April of a term since 2005. 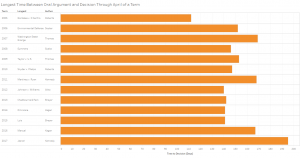 The Court released its decision in Jesner, along with several others, on April 24. From the perspective of the calendar year, this is the latest point in any year under Roberts that the court has released its 23rd opinion. 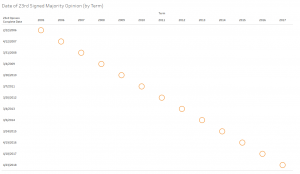 This figure, though, does not account for the fact that the term does not start on the exact same day every term. Based on close proximity of this year’s 23rd opinion to other terms’ 23rd opinions, this year’s place marker does not appear to be a great anomaly in this respect. 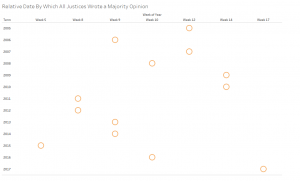 Signs from Roberts and Kennedy 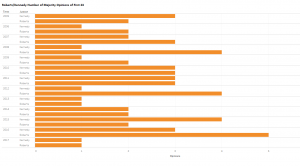 This is also the latest date in a Roberts-court term that both justices released their first majority opinion — Jesner for Kennedy and Hall v. Hall for Roberts. 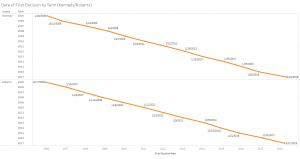 And now for synthesis: The Supreme Court was already on a slow trajectory in previous terms, and this term fits the pattern. The court’s pace this term is also a product of diverse opinions among the justices and the difficulty of reaching consensus. These complexities may be augmented by where Gorsuch fits into the equation and his voting proximity to Kennedy and Roberts.  To the extent that the justices are getting a sense of the court’s new composition, some of the output backup may be rectified moving forward. To the extent that the court is institutionally slowing down its work and that the justices have frequent significant vote splits, this trend will continue and may intensify before it abates.