The 2010 census brought good news for Texas. In the 10 years since the last census, it had gained nearly four million residents, which translated into four more seats in the U.S. House of Representatives. Those changes would require the state’s Republican-controlled legislature to draw new maps for both Congress and the statehouse, which it did in 2011. Since then, the state has been embroiled in litigation over its redistricting efforts, which continued at the Supreme Court this morning. But after nearly 80 minutes of oral argument, it wasn’t entirely clear where the justices were headed, or whether they would reach the merits of the case at all.

Today’s oral argument was the dispute’s second trip to the Supreme Court. In 2012, the justices threw out maps that a three-judge district court had drawn and ordered the lower court to draw new maps for the 2012 elections. In 2013, the Texas legislature adopted those court-drawn new maps, but last year the district court ruled that parts of the new maps violated federal voting laws and the Constitution because they perpetuated the discrimination that the district court had found in the 2011 maps. 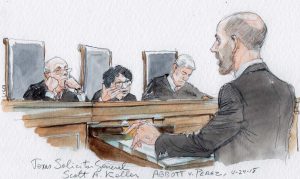 At the Supreme Court today, Texas solicitor general Scott Keller argued that the state legislature could not have been intentionally discriminating against minority voters when it adopted the maps that the district court itself had ordered the state to use. But Keller was quickly derailed by a topic that wound up occupying far more of the oral argument time than many would have expected: whether the Supreme Court has the authority to hear the case at all, when federal law only gives the court the power to hear appeals from a three-judge district court that either grants or denies an injunction.

Justice Sonia Sotomayor was the first to broach the topic, telling Keller that the state cannot appeal unless the district court “had made clear that it was issuing an injunction or prohibited you from using your map.”

Keller responded that, shortly after the district court ruled that the 2013 plans violated the Constitution and the Voting Rights Act, it “was ordering the state to appear for expedited court-drawn redistricting” – which had the same practical effect as an injunction.

But Justice Stephen Breyer was skeptical. He told Keller that when he became a judge in 1981, he was instructed that appeals had to come from either a judgment or the denial of an injunction. “You weren’t ordered,” he emphasized to Keller, because the district court issued “a piece of paper” that says “come to court” with a plan. If we allow this appeal to go forward, Breyer worried aloud, the Supreme Court will be faced with tens of thousands of appeals.

Justice Elena Kagan voiced similar concerns. If you are right, she told Keller, the Supreme Court will have to hear appeals in redistricting cases immediately after the three-judge district court finds that a map (or portions of a map) violates the Constitution or the Voting Rights Act, instead of waiting until the district court has come up with a remedy for the violations.

Justice Anthony Kennedy then joined the fray, although it is not clear which way his question (or Keller’s answer) cut. What if, Kennedy asked, the district court had given the state a 45-day window to appear to draw new maps, rather than a 3-day one? Would that order have the “practical effect” of an injunction?

Keller told Kennedy that it would still have the effect of an injunction, in part because Texas has a part-time legislature that was out of session when the district court issued its order. And in any event, he stressed, here the governor needed to call a special session within three days, which is “certainly not a reasonable opportunity for the legislature to” work to fix the problems with the maps.

When Keller eventually turned to the merits of the lower court’s ruling, he again emphasized the district court’s analysis in adopting the 2012 plan and the extensive “deliberative process” undertaken by the Texas legislature in 2013 when it adopted the existing plan. Both of those, he suggested, were “very good evidence” that the Texas legislature was operating in good faith when it enacted the 2013 plan.

But Sotomayor pointed out that a three-judge district court in Washington, D.C., had also reviewed the maps and found portions of them “suspicious” and reflecting “intentional discrimination.” Aren’t we obligated to look at the full picture,” she asked Keller, and “not just the piece of the picture you want us to look at?”

Keller also fielded a question from Chief Justice John Roberts, who sometimes likes to play devil’s advocate. One concern, Roberts observed, was that the 2012 plans were preliminary, rather than permanent. Does that undermine the “weight you can place on it?” Keller’s response: No, because of the lengthy process that the district court and legislature went through before adopting the plans.

Arguing on behalf of the United States in support of Texas, U.S. Deputy Solicitor General Edwin Kneedler emphasized that the Texas legislature adopted the 2013 plan because it wanted to end the ongoing litigation and move on. That intent, he posited, is something to “be encouraged.” 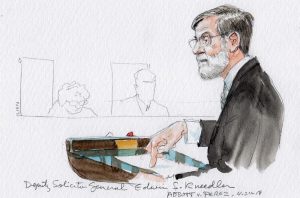 That argument may have gained some traction with Roberts, who told lawyer Max Hicks (who argued on behalf of the challengers to the congressional redistricting plan) that “it seems a strong argument” for the legislature to adopt the district court’s plan “to move things along.” Shouldn’t there be a presumption of good faith going forward, Roberts asked, “which is significant on the determination of their intent to discriminate?” 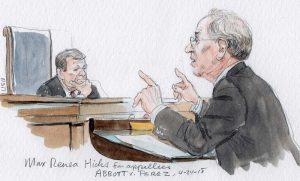 During his time at the lectern, Hicks tried to emphasize that things had changed between 2011 and 2013. The most important factor before the Texas legislature in 2013, he stressed, was one that hadn’t existed in 2011: Elections had been held using the existing maps, and so when the Texas legislature in 2013 decided to adopt the existing maps, it knew that it had accomplished what it had intended to do – the “tamping down” of minority voters. “Insanity,” Hicks told the justices, “is doing something over and over again and expecting different results.” In contrast, he concluded, “discrimination is doing the same thing over and over again and expecting and achieving the same results” – just what the Texas legislature accomplished by enacting its earlier maps.

Arguing on behalf of the statehouse plans, attorney Allison Riggs also tried to convince the justices that the Texas legislature had enacted the 2013 plan to “perpetuate its ill-gotten and racially discriminatory 2011 gains.” But Riggs, like Hicks,  ran into questions from Roberts, who hypothesized that the Texas attorney general or legislature would use the district court’s interim plan if it wanted to “take your best shot at a plan that will be accepted by the district court.” 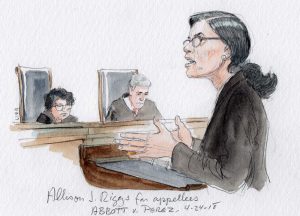 Riggs allowed that the interim plan might be a suitable “starting point,” but she suggested that in 2013 the legislature was simply using the 2012 interim plan “as a mask for the discriminatory intent that had manifested itself just two years ago.” That is precisely what the district court – which she described as “the body that is well poised to sniff out pretext and to sniff out real justification” – unanimously concluded, she noted.

The justices had originally allotted 70 minutes for today’s oral argument, but Roberts allowed the session to run well over that. The court’s more liberal justices clearly seemed to be hoping that they could forestall a ruling on the merits by convincing at least one of their more conservative colleagues that the court lacked jurisdiction over the case in the first place. Kennedy might be their best hope, but the court’s ruling on the merits of the challenge could also hinge on Kennedy’s vote; if so, the fate of the dispute could (as is so often the case) rest in Kennedy’s hands.