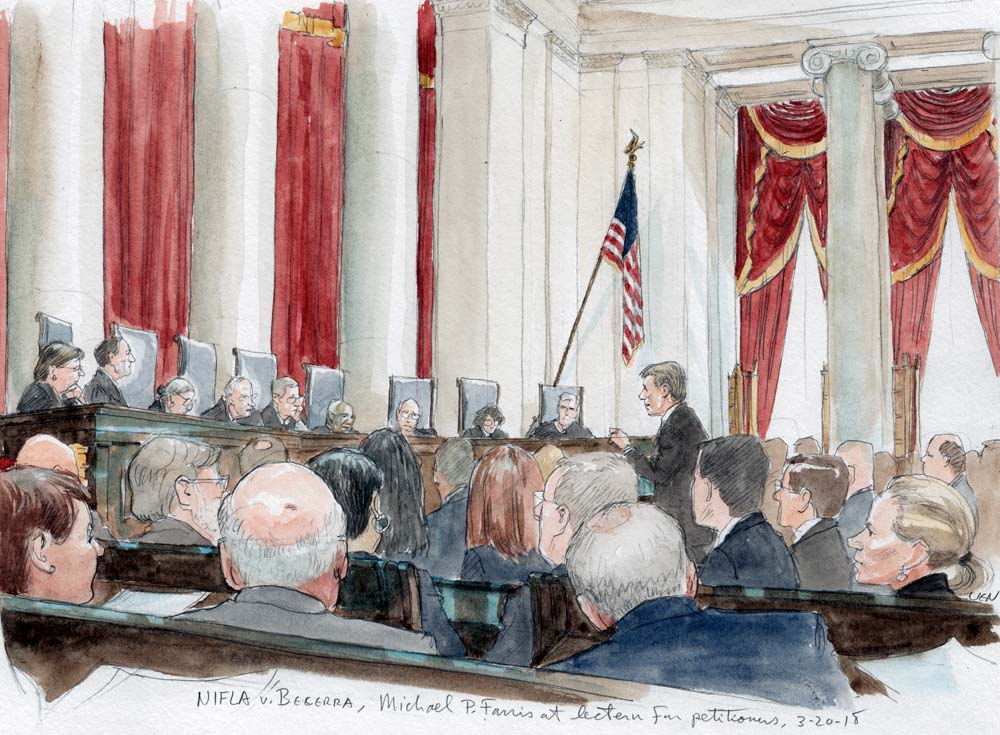 The Supreme Court heard oral argument today in National Institute of Family and Life Advocates v. Becerra, a highly anticipated case that combines two often controversial topics: the First Amendment and abortion. The question before the justices today was whether a California law that directs “crisis pregnancy centers” to provide their patients with specific kinds of information – including, for some, the availability of low-cost or free abortions – violates the First Amendment’s free speech clause. After roughly an hour of oral argument, the law appeared to be in some jeopardy, not only among the court’s more conservative justices but also perhaps at least with Justice Elena Kagan, one of the more liberal justices. 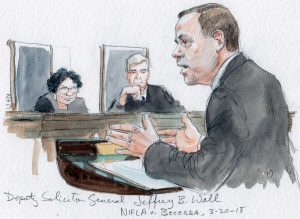 The law at issue is the Reproductive Freedom, Accountability, Comprehensive Care, and Transparency Act, also known as the Reproductive FACT Act. The California legislature passed the law because it was worried that crisis pregnancy centers – nonprofit organizations, often affiliated with Christian groups, that are opposed to abortion – were posing as full-service reproductive health clinics and providing pregnant women with inaccurate or misleading information about their options. The act requires nonprofits that are licensed to provide medical services (such as pregnancy tests and ultrasound examinations) to post notices to inform their patients that free or low-cost abortions are available, while centers without such licenses – which try to support pregnant women by supplying them with diapers and formula, for example – must include disclaimers in their advertisements to make clear, in up to 13 languages, that their services do not include medical help.

Arguing on behalf of the centers, attorney Michael Farris quickly ran into questions from several of the court’s more liberal justices that boiled down to what Justice Stephen Breyer dubbed “what is sauce for the goose is sauce for the gander”: If a state that opposes abortion can require a doctor who performs abortions to tell a pregnant woman about the possibility of adoption, why can’t a state that supports abortion rights require a doctor to tell a pregnant woman about the availability of free or low-cost abortions?

Justice Sonia Sotomayor appeared to agree. If you decide to talk about pregnancy, she asked Farris, why shouldn’t you be required to tell people that you are not a doctor? She asked, in a seemingly rhetorical question, whether states can also require agencies or groups that provide information on immigration to tell the recipients of their services that they are not lawyers.

Farris and Jeffrey Wall, the deputy U.S. solicitor general who argued on behalf of the federal government, tried to distinguish between the two kinds of disclosures, stressing that requirements to inform pregnant women about alternatives to abortion only come into play when medical procedures are being provided, and that the unlicensed clinics are not providing such procedures. 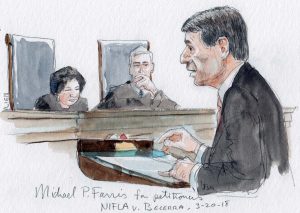 But Sotomayor was skeptical, telling Wall that the clinics sometimes provide ultrasounds and pregnancy tests. “But I don’t know” what those are, she complained, “if not a procedure.” “I don’t know how” pregnancy counseling, she continued, “is not part of medical advice in the same way a doctor gives it when he’s considering an abortion procedure. I don’t understand the difference.”

Justice Samuel Alito, on the other hand, was concerned that the law unfairly singles out anti-abortion facilities like crisis pregnancy centers while providing exemptions for other kinds of health-care providers. “If you have a law that’s neutral on its face” but then contains “a lot of crazy exemptions,” he asked, “isn’t it possible to infer intentional discrimination?” After Joshua Klein, the deputy state solicitor general who argued for California, agreed that it was, Alito peppered him with questions about various exemptions in the California law and concluded that “when you put all this together, you get a very suspicious pattern.”

Perhaps more crucially for the state, Kagan seemed to share some of Alito’s concern that, as she put it, California might have “gerrymandered” the law – that is, drawn it to target crisis pregnancy centers. If so, she declared, “that’s a serious issue.”

Klein tried to assure Kagan and Alito that the law also applies to a “significant” number of clinics that are not opposed to abortion, but Kagan nonetheless pressed him to explain why and how the state decided to create the exemptions. Kagan then asked Klein to identify the impetus for the statute. Was the statute intended to address the problem of pregnant women generally not getting enough information about their options or, instead, was it enacted out of a belief that crisis pregnancy centers were misleading women about their options?

Klein responded that the statute fell into the first category, but that response got him into trouble with Justice Neil Gorsuch. If that’s the case, Gorsuch asked Klein, why can’t the state use other methods to make sure that pregnant women are aware of their options, rather than free-riding “on a limited number of clinics to provide that information”? “If you’re trying to educate a class” of people “about their rights,” Gorsuch stressed, “it’s pretty unusual to force a private speaker to do that for you under the First Amendment.”

Justice Ruth Bader Ginsburg joined the fray. She asked Klein whether, if the state had enacted the law to address the problem of crisis pregnancy centers providing incomplete or inaccurate information, California had ever filed charges against a center for “false and misleading advertising.” 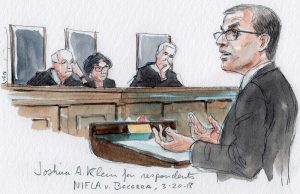 Klein responded that the state had not, but he cautioned that doing so would not necessarily be less intrusive because it might require “undercover patients, record subpoenas, site visits and the rest.”

Gorsuch was unconvinced. He countered that using “very familiar” antifraud laws would “have the virtue of applying evenly to all persons and all industries.” “So why wouldn’t that be a superior mechanism for addressing these concerns”? he asked.

Justice Anthony Kennedy also expressed doubts about the law. In one question that may prove to be pivotal in the case, he asked Farris what would happen if an unlicensed clinic wanted to put up a billboard that said only, in large letters, “Choose Life.” Would that message trigger the law’s notice requirement?

Farris responded that the billboard would indeed have to disclose that the nonprofit does not provide medical services – a point with which Klein seemed to agree.

Farris’ answer drew a sharp response from Kennedy. Requiring the inclusion of a 29-word notice on a billboard displaying a two-word message, Kennedy suggested, seems to impose an “undue burden” on the nonprofit’s speech “that should suffice to invalidate the statute.”

Perhaps recognizing that the law was in trouble, Breyer tried to find a softer landing. Because this case came to the Supreme Court in the preliminary stages, when the clinics were seeking to temporarily block the law, rather than after a trial, he suggested, wouldn’t a better approach be to wait until after there has been a trial, which would provide a fuller record for the court to consider these issues?

Unfortunately for Breyer, his colleagues seemed less enthusiastic about the prospect. When Klein told the justices that there was no information in the record about what kinds of advertisements the centers run, Kennedy scoffed, “So you want me to have a remand for them to tell the court what a billboard is?”

By the time the oral argument ended this morning, California’s law seemed like it could be in real trouble. And although we normally think of the Roberts court as being closely divided on high-profile cases, today’s argument suggested that the ruling might not necessarily be a close one. The justices could ultimately decide to strike down part or all of the Reproductive FACT Act, while leaving open the possibility that a more generally applicable law might pass constitutional muster. We’ll know more by the end of June.