Opinion analysis: Police prevail in the case of “Peaches” and the party 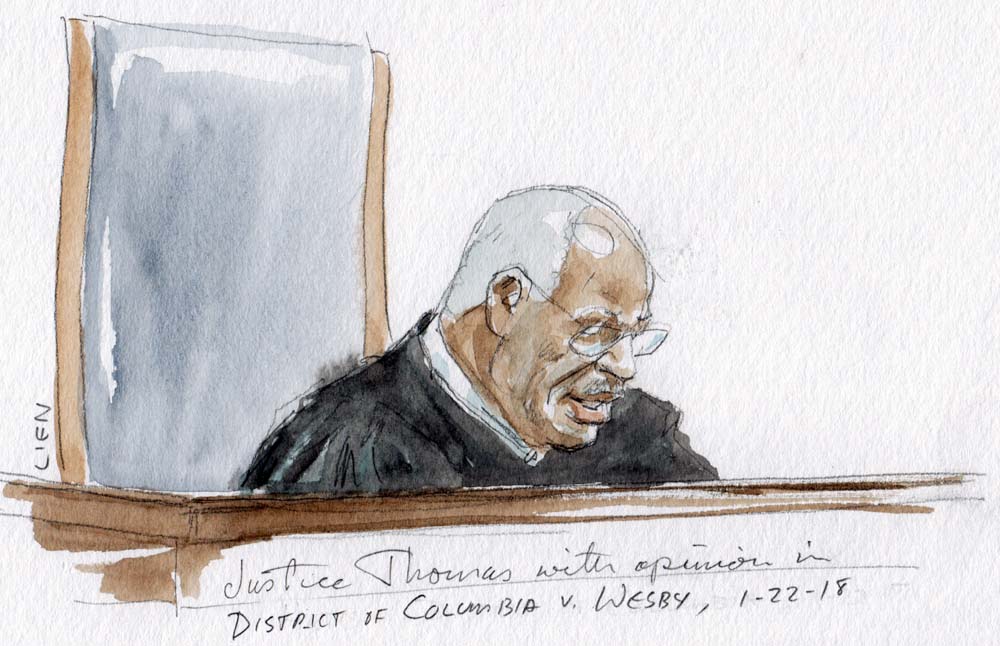 Almost 10 years ago, Theodore Wesby attended a party in the northeast section of Washington, D.C., that his own attorney would later describe as “raucous.” There were strippers offering lap dances, plenty of alcohol, people having sex upstairs, and (at least the smell of) marijuana. The celebration ended abruptly, however, when police received complaints about the party from neighbors, who also told them that the house should have been empty. Police arrested the partygoers for trespassing and took them to the police station, where they were eventually charged with disorderly conduct. Those charges were dropped, but Theodore Wesby and 15 other partygoers then filed their own lawsuit, arguing that the police had lacked probable cause to arrest them because the officers didn’t have any reason to believe that the partygoers knew that they weren’t supposed to be there. The lower courts agreed, ordering the police officers to pay the partygoers nearly a million dollars in damages and attorney’s fees, but today the Supreme Court reversed.

When the justices heard oral argument in Wesby’s case last October, the debate shed some light on their own lives. Justice Sonia Sotomayor, for example, observed that when she is invited to a party, she doesn’t confirm that her host has permission to be there, while Justice Neil Gorsuch hinted that even Supreme Court justices sometimes rely on temporary furniture, like folding chairs, after they move.

But today’s opinion, by Justice Clarence Thomas, was far less personal. It began with the first question presented in the case: whether the officers had probable cause to arrest the partygoers, who claimed that they had been invited to the house. Given all of the circumstances of the party, the court believed that the answer was clearly yes. Thomas first pointed to “the condition of the house and the conduct of the partygoers,” stressing that most “homeowners do not live in near-barren houses. And most homeowners do not invite people over to use their living room as a strip club, to have sex in their bedroom, to smoke marijuana inside, and to leave their floors filthy. The officers could thus infer that the partygoers knew their party was not unauthorized.”

This conclusion, Thomas continued, was only bolstered by the “vague and implausible” answers that the partygoers provided to the officers’ questions. “Additionally,” he noted, “some of the partygoers claimed the event was a bachelor party, but no one could identify the bachelor. The officers could have disbelieved them, since people normally do not throw a bachelor party without a bachelor.” And even though “Peaches,” a woman who had been identified as the hostess by two of the strippers, told the police that she had invited the partygoers and first maintained that she had permission to use the house, “she ultimately confessed that this was a lie.”

Thomas rebuked the U.S. Court of Appeals for the District of Columbia Circuit for engaging in what he described as “an excessively technical dissection of the factors supporting probable cause.” In particular, he explained, the court of appeals should have focused on “the whole picture” rather than looking at the facts “one by one.” And the fact that the partygoers might have offered an “innocent explanation” for some of the behavior at the party – such as the drinking and the lap dances – does not, standing alone, allow the court to disregard those details. Instead, Thomas reasoned, the question is whether, taking all of the facts into account, an officer could conclude “that there was a substantial chance of criminal activity.”

The court then turned to the second question in the case: whether the police officers were entitled to immunity from Wesby’s lawsuit. Although the Supreme Court was not required to decide that question because the officers had already prevailed on the issue of whether they had probable cause to arrest the partygoers, it nonetheless opted to do so anyway – to correct what it regarded as errors in the D.C. Circuit’s analysis.

For a lawsuit against the police officers to go forward, the court explained, it must be “clearly established” that their conduct was wrong – that is, that they lacked probable cause to arrest the partygoers. As the first part of the opinion demonstrates, the justices believed that that the officers’ conduct was in fact correct. But even if it weren’t, the court emphasized, there are no cases suggesting that the conduct was wrong. Even more importantly, the court continued, there are no cases to support the rule on which the D.C. Circuit relied — that there can be no probable cause if the partygoers had a good-faith belief that they were allowed to be in the house.

Sotomayor agreed with her colleagues on the result in the case, if not the reasoning. In a one-page concurring opinion, she wrote that she would not have reached the question of probable cause at all, because the court did not need to do so if it concluded that the officers were immune from lawsuit.

Justice Ruth Bader Ginsburg filed her own concurring opinion, in which she agreed with the court’s disposition of the case, but for different reasons than Sotomayor. Ginsburg questioned the logic that prompted police officers to arrest the partygoers, and in particular one officer’s belief, which “was based on an error of law,” that the partygoers could be arrested simply because they did not have the homeowner’s consent, even if they thought they were allowed to be in the house. Expressing her concern that the court’s decisions set “the balance too heavily in favor of police unaccountability to the detriment of Fourth Amendment protection,” Ginsburg would have left open the question of whether “a police officer’s reason for acting, in at least some circumstances, should factor into the Fourth Amendment inquiry.” But in any event, she concluded, the officers cannot be sued in this case because the law is unsettled.