Argument preview: Justices to consider role of military judges and the dual-officeholding ban 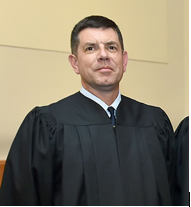 In 2006, Congress – relying on its power under Article I of the Constitution to regulate the armed forces – created the United States Court of Military Commission Review. That court, known as the CMCR, hears appeals from military commissions, such as the one created at Guantanamo to try enemy combatants. Federal law outlines two ways in which judges can be placed on the CMCR: Military officers who already serve as appellate judges on military courts can be assigned to the CMCR by the Secretary of Defense; and the president can appoint judges (with Senate approval) to the court. “Because of the specialized nature of the CMCR’s jurisdiction,” the federal government has noted, “there are times when the Court’s judges may have little to do”; in part because of this dearth of steady work, most CMCR judges have also been military officers serving simultaneously as judges on one of the four (Army, Navy, Air Force and Coast Guard) courts of criminal appeals (CCAs) that review appeals of some convictions by courts-martial.

The use of CCA judges on the CMCR may make sense from a practical standpoint, but next week the Supreme Court will hear oral argument on whether it violates the law. The challenge comes from several members of the armed forces, who were convicted by military courts-martial of offenses ranging from the wrongful use of a controlled substance to serious sexual misconduct. Their cases went to the CCAs for their branches of the service, where their convictions were upheld by panels that included judges who also had been confirmed as judges on the CMCR. They contend that they are entitled to new hearings before the CCAs because the judges’ simultaneous service on the CCA and CMCR runs afoul of a longstanding rule prohibiting active-duty military officers from holding a second government job that requires presidential nomination and Senate confirmation – sometimes referred to as the “dual-officeholding ban.”

The U.S. Court of Appeals for the Armed Forces – which generally has the discretion to choose what cases to review, and reviews only a relatively small percentage of the cases decided by the CCAs on the merits – agreed to weigh in on the servicemembers’ cases. But the CAAF ruled that Dalmazzi’s case was moot, because President Barack Obama did not sign the CMCR commission for the judge at issue until after the Air Force CCA had released its decision in her case; it then vacated its grant of review and dismissed her petition, later doing the same for Cox. In Ortiz’s case, the CAAF ruled that, even if the judges’ simultaneous service on the CCA and CMCR did violate the law, they could still sit on the CCAs – the only effect would be on the judges’ appointments to the CMCR. The servicemembers asked the Supreme Court to take up their cases, which it agreed to do last fall.

In their briefs, the two sides address a variety of issues, which boil down to this: Did Obama’s appointment of the CCA judges to serve on the CMCR violate the law, and – if so – does that mean that the CCAs’ decisions upholding the servicemembers’ convictions are no longer valid, so that the servicemembers are entitled to new hearings?

The United States starts with a threshold question: whether the Supreme Court can even review two of the three cases – those of Dalmazzi and Cox. It contends that the answer is no, because federal law bars the Supreme Court from reviewing the CAAF’s denial of a petition for review. And that’s exactly what happened here, the government argues. The CAAF granted review in Dalmazzi’s case (as well as in Cox’s) to decide whether Judge Martin Mitchell, a colonel in the U.S. Air Force, could no longer serve on the CCA after the president had appointed him to the CMCR. The CAAF determined that the question was moot because Mitchell’s commission to the CMCR had not yet been signed when Mitchell ruled on Dalmazzi’s case; it vacated its order granting review of the case and replaced it with an order denying her petition. Therefore, the government concludes, there is no judgment to review in those cases.

Dalmazzi and Cox push back, stressing that federal law clearly allows the Supreme Court to review cases in which the CAAF “granted a petition for review.” “Serious constitutional problems” would arise, they warn, if the CAAF could thwart Supreme Court review simply by denying petitions that it had already granted. Moreover, they add, their cases are not moot because federal law bars military officers from both holding and exercising the functions of a “civil office in the Government of the United States.” It doesn’t matter when Obama signed Mitchell’s commission, they suggest, as long as Mitchell was exercising the functions of a judge when he ruled on their cases.

Turning to the merits of their case, the servicemembers once again point to the text of the dual-officeholding ban, which bars military officers from holding or exercising the functions of a “civil office” requiring a presidential nomination and Senate confirmation “except as otherwise authorized by law.” The judges’ simultaneous service on the CMCR and the CCAs falls squarely within the language of the ban, they argue, and it is not covered by the exception because Congress has not authorized the appointment of military officers to sit as judges on the CMCR. Indeed, they assert, the fact that Congress did provide for military officers to be assigned to the CMCR indicates that it did not intend for them to be appointed.

The federal government counters that the judges’ simultaneous service on the CMCR and CCA does not violate federal law because a CMCR judgeship is not a “civil office.” Instead, the government reasons, just like “the CCA’s review of courts-martial, the CMCR’s review of military commissions is a military function that has long been performed by military officers.” Moreover, the government adds, Congress specifically provides that the secretary of defense can assign military officers to serve on the CMCR. Whether a judge is assigned by the secretary of defense or appointed by the president is irrelevant, the government contends.

Not surprisingly, the servicemembers and the government also disagree about what should happen if the Supreme Court concludes that the judges’ simultaneous service on the CMCR and CCA violated the dual-officeholding ban. The government tells the justices that the servicemembers’ convictions would still stand because another part of the dual-officeholding law, known as the “savings clause,” indicates that the ban would not invalidate actions taken by “an officer in furtherance of assigned official duties.” That provision applies here, the government argues, because the judges in question ruled on the servicemembers’ cases “in furtherance of” their “assigned duties” on the CCAs.

The servicemembers respond that, for “as long as it has been on the books, the default remedy for a violation of” the dual-officeholding ban “has been the offending officer’s immediate separation from the military” – which would mean that the judges in question could no longer serve on the CCAs. The “savings clause” does not help the government, they continue, because it was enacted to address an entirely different problem that no longer exists – efforts to invalidate actions taken by military officers who had been wrongly assigned to civil offices.

High-profile cases at the Supreme Court can often attract dozens of “friend of the court” briefs, to explain or elaborate on various points that could be useful to the justices. This case has drawn only one “friend of the court” brief, but that lone brief could prove to be very significant. Filed by Aditya Bamzai, a University of Virginia law professor, it questions whether the Supreme Court has the power to review decisions by the CAAF at all. Bamzai points to the landmark 1803 case of Marbury v. Madison, best known for establishing the doctrine that courts can (and should) decide whether laws passed by Congress violate the Constitution. Marbury also makes clear, Bamzai contends, that under the Constitution, the Supreme Court can only review decisions by the CAAF if they are “appeals.” But because the CAAF is part of the executive branch, he concludes, it does not exercise real judicial power. With both the servicemembers and the federal government in agreement that the Supreme Court has the authority to review CAAF decisions, the Supreme Court last week took the relatively unusual step of allowing Bamzai to participate in the oral argument. Bamzai will have just 10 of the 70 minutes of argument time, but they could be a pivotal 10 minutes: If the justices agree with him, it would scuttle the case. Is this question a serious concern, or are the justices making sure that all of the issues are fully vetted? We’ll know more after next week’s oral argument.