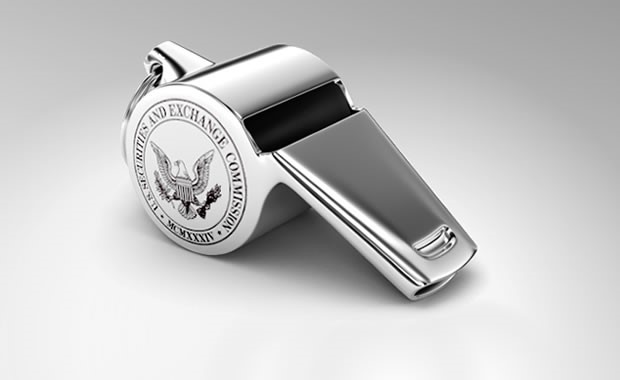 In 2010, Congress was all about reforesting the new wasteland of American finance created by the 2008 financial crisis; the result was the Dodd-Frank Wall Street Reform and Consumer Protection Act, which transformed the banking and financial-services industry. Early in the legislative process, it was agreed that paying bounties for information would be a nifty idea; the result was a proposal that if information reported to the Securities and Exchange Commission led to monetary penalties, the commission could reward the reporter with part of the take. The term “whistleblower” was employed throughout the new, several-page-long Section 21F of the Securities Exchange Act of 1934 and was specifically defined as “any individual who provides … information relating to a violation of the securities laws to the Commission, in a manner established, by rule or regulation, by the Commission.”

The whistleblower award structure created by Section 21F sensibly included protection against employer retaliation. Two proposed subsections prohibited retaliation against whistleblowers for providing information to the commission and for participating in any judicial or administrative actions based on or related to the information provided.

Inside, outside, upside down

Both the House of Representatives and the Senate had passed bills endorsing this coherent scheme before any lawmakers focused on the possibility of retaliation against an employee for internal reporting – that is, for reporting to a supervisor, company audit committee or the like. Legislative history reveals concern for promoting internal reporting, as well as dissatisfaction with the pre-existing provisions of the Sarbanes-Oxley Act of 2002 that prohibited retaliation against whistleblowers engaging in either internal or external reporting.

There is, however, no legislative history specifically discussing the origin of a third anti-retaliation subsection (we’ll call it “Clause (iii)”), which sprang from the head of Zeus and into Section 21F shortly before passage of Dodd-Frank. Clause (iii) does not refer to providing information to the SEC, but prohibits retaliation against “whistleblowers” for acts protected under several cross-referenced laws. These acts include, under Sarbanes-Oxley, internal reporting and/or reporting to or cooperating with arms of government other than the SEC – notably including members and committees of Congress.

The problem, of course, is that a “whistleblower” is defined in Dodd-Frank as someone who provides information to the commission about a securities-law violation. If you are an employee claiming retaliation either for internal reporting or for reporting to some arm of government other than the SEC and you did not also report to the SEC, you would seem to be out of luck.

Digital Realty Trust, Inc., hired Paul Somers in 2010 and fired him in 2014, allegedly in retaliation for reporting to senior management his supervisor’s elimination of internal controls in violation of Sarbanes-Oxley. Somers forewent the remedy made available under Sarbanes-Oxley itself, which requires filing a complaint with the Department of Labor within 180 days of the retaliatory event. Instead, seven months after his firing, he instituted a lawsuit in the U.S. District Court for the Northern District of California claiming the protection of Clause (iii). Digital Realty moved to dismiss on the grounds that, although Somers might be a whistleblower for Sarbanes-Oxley purposes, he had not satisfied Dodd-Frank’s threshold requirement of reporting information to the commission.

The district court declined to follow Asadi v. G.E. Energy (USA), L.L.C., a decision of the U.S. Court of Appeals for the 5th Circuit holding that the plain language of Section 21F limits “whistleblower” status to those reporting information to the commission. Instead, in line with the majority of the district courts that had considered the matter, it found the statute ambiguous, and turned to the SEC’s own interpretation of the definition of “whistleblower,” which favored Somers.

Flashback: Enter Rule 21F-2 and the elephant in the room

Section 21F authorizes the commission to adopt “such rules and regulations as may be necessary or appropriate to implement the provisions of this section consistent with the purposes of this section.” In 2011, after notice and comment, the SEC did so. Unlike the statute, Rule 21F-2 bifurcates the definition of “whistleblower” to distinguish those who seek bounties from those who seek protection from retaliation. The ability to claim a bounty is premised on providing information to the commission pursuant to its designated procedures. By contrast, according to Rule 21F-2, the ability to receive protection from retaliation is based on disclosing information in a manner described in any of Section 21F’s anti-retaliation provisions, including Clause (iii) and its cross-references.

Whether Rule 21F-2 is dispositive or, perhaps, even interesting is affected by one’s views of (a) whether Clause (iii) is ambiguous and (b) whether the Chevron-deference doctrine is entitled to, well, deference. Under that doctrine, pioneered in Chevron, U.S.A., Inc. v. Natural Resource Defense Council, Inc., if congressional intent is unclear, courts should defer to an agency’s permissible construction of the relevant statute. Those who are followers of developments in administrative law will know that there was an attempt earlier this year to legislate Chevron deference out of existence. They also will know that Justice Neil Gorsuch takes a less charitable view of Chevron – “the elephant in the room,” he once called it – than did his predecessor, Justice Antonin Scalia.

[Fun fact: Gorsuch’s mother, Anne Gorsuch Burford, then-head of the Environmental Protection Agency, was the original defendant in the litigation leading to Chevron.]

Fast forward: Enter Berman and the 9th Circuit’s ruling in this case

Before the appeal of the California district court’s order was heard by the U.S. Court of Appeals for the 9th Circuit, the U.S. Court of Appeals for the 2nd Circuit weighed in on the issue. The 2nd Circuit majority in Berman v. Neo@Ogilvy LLC, WPP Group USA, Inc., saw Clause (iii) as ambiguous, invoked Chevron, and chose to defer to Rule 21F-2. Rather than following either Asadi in finding that the plain language of the statute dictates a pro-employer outcome or Berman in invoking Chevron, the 9th Circuit forged its own path. This led the court to conclude that “whistleblower” should be read two different ways in Section 21F, even without resort to the commission’s rule (although Chevron deference was a back-up). According to the 9th Circuit, employing the Asadi approach “would “narrow[] [the third clause of the anti-retaliation provision] to the point of absurdity.” Not only would the group benefiting from that clause be exceedingly small, it generally would exclude attorneys and auditors required to report internally before turning to the commission.

Digital Realty (obviously) claims that Section 21F is not ambiguous and that the plain language of the statute requires a ruling in its favor, asserting that the group protected under Clause (iii) is not absurdly limited given the congressional purpose to incentivize reporting to the SEC. It also makes the previously unvoiced claim that the adoption of Rule 21F-2 was procedurally flawed and therefore particularly unentitled to deference. Another highlight of its brief is a prediction that the Sarbanes-Oxley whistleblower protections will be emasculated if the Dodd-Frank protections are robustly construed. Noteworthy, too, is the argument that Congress knew how to adopt a more encompassing definition of “whistleblower,” showcasing the more comprehensive definitions of the term found in other statutes, including Sarbanes-Oxley, as well as in Dodd-Frank itself.

Somers’ brief details the shortcomings of Sarbanes-Oxley in heading off the financial crisis of 2008, urges the broad goals of Congress to incentivize whistleblowing of all types, and presses the confusion caused by Clause (iii)’s cross-referencing of another statute with a different, broader definition of “whistleblower.” It also mines Section 21F for evidence of inconsistencies demonstrating that the section is in tension with itself. Somers points out that although his construction clearly would enhance use of Clause (iii), there might still be internal reporters who would utilize the Sarbanes-Oxley remedy to avoid the expense of litigation. His closing salvo is directed at the impropriety of Digital Realty’s late-in-the-day attempt to raise possible irregularities in the adoption of Rule 21F-2.

A few of the amicus briefs are rather eye-catching.

In support of Digital Realty, the Cato Institute polishes the procedural-irregularity arguments to high gloss; Lime Energy Services and Prestige Cruises (both in the throes of related litigation) point out the availability of state remedies to those left unprotected by Section 21F.

In support of Somers, several amici amp up arguments about Supreme Court precedents that relax statutory definitions as required by context. The U.S. solicitor general details the legislative background and congressional purpose in enacting whistleblower protection and Sen. Charles Grassley, a Republican from Iowa, argues that Digital Realty’s interpretation of Clause (iii) is incongruously narrow compared to other statutory schemes and would severely discourage internal reporting.

In what may be the most thought-provoking amicus brief, the National Whistleblower Center steps forward to claim paternity of Clause (iii). It also gives the kaleidoscope a twist. Under the statutory definition, one becomes a whistleblower by conveying information to the SEC in the manner specified by the SEC. The center argues that Rule 21F-2 means that the commission has determined that it will accept information constructively when the information is transmitted as part of an internal report or reported to another arm of government.

The constructive-conveyance argument is inviting in the case of disclosures made to other government agencies or Congress itself, because they presumably can be trusted to act on the information and/or, as appropriate, pass it along to the commission. Perhaps regarding internal reporting as constructive conveyance is more of a stretch, but it could be one the justices find themselves limber enough to contemplate.