A “view” from the courtroom: The metes and bounds of the term 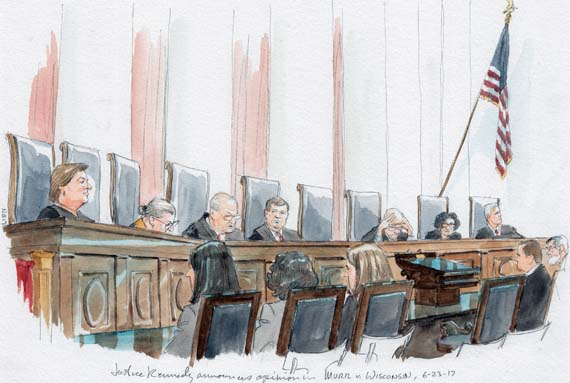 Fridays are rare days for Supreme Court opinions, with the last one coming two years ago when the same-sex marriage ruling in Obergefell v. Hodges (and one other decision) was announced.

But with nine cases left to decide on this second bonus opinion day of the term, it seems possible that the court is aiming to finish its work by Monday. We’ll have our answer a little later.

The bar section is about as empty today as it was yesterday, with a handful of advocates present. Todd Gaziano of the Pacific Legal Foundation is here, awaiting a decision in Murr v. Wisconsin, a PLF case involving the takings clause. Jordan Lorence of the Alliance Defending Freedom is here, likely awaiting the decision in Trinity Lutheran Church of Columbia v. Comer. Arthur Spitzer, the legal director of the American Civil Liberties Union of Washington, D.C., is here, as he often is at the end of the term.

Several members of the U.S. solicitor general’s office file in and take places at the counsel tables, while Noel Francisco, the president’s nominee for solicitor general who is serving in another Justice Department post pending his confirmation (thanks to this term’s decision in National Labor Relations Board v. SW General Inc.), takes a seat in the bar section. The public gallery contains a lot of young people today, but is not completely full.

Meanwhile, several of the justices’ law clerks have filled the vestibules on the south side of the courtroom.

After yesterday’s minor misstep, three marshal’s aides take their places behind the bench this morning at 10 a.m., before the justices’ arrival. When the court takes the bench, Justices Clarence Thomas and Samuel Alito are absent. It’s Thomas’ 69th birthday today, but we don’t think that’s the reason for his absence.

This involves a U.S. Census Bureau employee who was dismissed for “spotty attendance,” she explains, and the legal question concerns the proper forum for an appeal of the merit board’s dismissal of a “mixed case” — one involving allegations that an adverse civil-service employment action was motivated by discrimination based on race, gender, age or disability.

Ginsburg’s opinion sides with federal district court review, rejecting the government’s argument that mixed claims be split between a district court and the U.S. Court of Appeals for the Federal Circuit.

Justice Neil Gorsuch has written a dissenting opinion, joined by Thomas. This was the first case heard by Gorsuch when he joined the court, and this is his first written dissent. He does not deliver it from the bench.

Justice Anthony Kennedy is next with the opinion in Murr v. Wisconsin, about a family’s challenge to municipal limits on its development of two parcels of property they own along the St. Croix river as a regulatory taking. (Authorities required the family to sell or build on the two lots as a single, combined property.)

This was one of the cases the court agreed to review while Justice Antonin Scalia was still alive, and the court carried it over to the current term. It was also argued on the first day of Gorsuch’s Senate confirmation hearing, when the attention of the press corps was focused on the Hart Senate Office Building.

What was already an important takings case took on a new perspective when, last fall, during one of many panel discussions in which legal experts preview the coming term, one such expert awoke us from a state of mental slumber by describing a footnote in the merits brief of the state of Wisconsin.

Wisconsin, in support of the idea that property lot lines are “creatures of state law,” reached back to English law to explain that landholdings were defined by “metes and bounds” — measurements and boundaries. Footnote 3 of the state’s brief then provided some further historical context:

In Medieval England, the ritual of “beating the bounds” was of particular importance to defining the boundaries of a parish, manor, or royal forest. … These “periodical surveys” preserved “ancient boundaries” by, among other methods, requiring young boys to beat a boundary mark “with peeled willow wands to impress its location on their memories.” … “[T]o preserve evidence of particular boundaries,” the “boys themselves” were sometimes whipped “on the spot” in exchange for a fee, “it being thought that the impression made on the memory was thus more likely to be lasting.” …. The testimony of boys—beaten during these ceremonies—was used to settle more than one boundary dispute.

Neither the oral argument nor Kennedy’s opinion delves into the practice of beating the bounds. Kennedy observes that in considering the proper unit of property against which to assess the effect of the challenged governmental action, “courts should give substantial weight to the treatment of the land, in particular how it is bounded or divided, under state and local law.”

Kennedy says that because, among other reasons, the value of the combined lots required by the local regulations is likely greater than the separate lots, the Murrs have not suffered a compensable taking. The chief justice — who does mention “metes and bounds” — has filed a dissent, joined by Thomas and Alito. Thomas has filed a separate dissent. And Gorsuch, of course, did not participate.

Roberts says that he has the opinion in Lee v. United States, one of the court’s many immigration cases this term.

The chief justice begins with the personal story of Jae Lee, who emigrated from South Korea at age 13 in 1982, graduated from high school in New York City, then set out to Memphis, where he eventually opened the Mandarin Palace Chinese Restaurant. Lee, long classified as a lawful permanent resident, was not always that lawful, as “he also engaged in some illegal acts,” Roberts says.

Lee’s arrest on drug charges led to some particularly bad advice from his defense lawyer, who had advised him that he would not face deportation if he pleaded guilty to the offense.

“Lee soon learned that his attorney was dead wrong,” Roberts says from the bench. Lee had pleaded guilty to an aggravated felony under the Immigration and Nationality Act and was subject to mandatory deportation. This led to a motion to vacate the conviction and sentence based on the fact that Lee had been provided constitutionally ineffective assistance of counsel.

It seems during this description that the chief justice is sympathetic to Lee’s claim.

He emphasizes the theme that Lee received “very bad advice” from his lawyer and that as someone who had lived for 30 years in the United States, established two businesses, had never returned to South Korea since childhood, and was the sole family member who could care for his elderly parents, Lee would place “paramount importance” on avoiding deportation.

Indeed, Roberts gets around to explaining that even though the evidence against Lee was strong, and thus choosing to go to trial might offer him faint hope of avoiding deportation, “we cannot say it would be irrational for a defendant in Lee’s position to reject the plea offer in favor of trial.”

Thomas has filed a dissent joined but for one section by Alito. Gorsuch took no part.

With that, Roberts announces that “this court will next sit Monday morning at 10 o’clock. At that time we will announce all remaining opinions ready during this term of the court.”

Six cases remain. Whether they are all ready for announcement, or whether some are to be set for re-argument, is a question that should be answered on Monday.

[Correction: An earlier version of this post stated that Kennedy’s opinion in Murr v. Wisconsin mentions “metes and bounds.” It is Roberts’ dissent in that case that mentions that phrase.]