At oral argument today in the U.S. Supreme Court, the justices were not especially sympathetic to the plight of Divna Maslenjak. The 53-year-old came to the United States as a refugee in 2000, fleeing ethnic strife in the former Yugoslavia. Maslenjak became a U.S. citizen seven years later, but last fall she was deported to Serbia. U.S. immigration officials stripped her of her citizenship after she admitted that she had lied about her husband’s service in the Bosnian Serb military, but the justices seem likely to give her another shot at keeping it. Although they may not have been fans of Maslenjak personally, though, the justices were even less enthusiastic about the prospect of ruling for the government, expressing concern that such a ruling would give U.S. officials boundless discretion to take away citizenship based on even very minor lies.

During the first part of the argument, things didn’t necessarily look good for Maslenjak. The government had charged her with violating a federal law that authorizes both a fine and a prison sentence for anyone who “knowingly procures or attempts to procure, contrary to any law, the naturalization of any person.” The government argued that, when Maslenjak applied to become a citizen, she knew that she had lied to immigration officials when seeking to come to the U.S. as a refugee. Maslenjak countered that the government couldn’t take away her citizenship just because she lied; the lie had to be a “material” one – that is, one that would have affected the immigration officials’ decision.

But some justices didn’t regard the distinction between a material and immaterial lie as an easy line to draw. Justice Anthony Kennedy told Christopher Landau, who was representing Maslenjak, that whether a false statement influenced the government’s decision to grant citizenship is sometimes “known only after the fact.” “You can have a statement that everyone thinks is immaterial, it’s subjectively immaterial, but it might have a causal connection at the end of the day.” 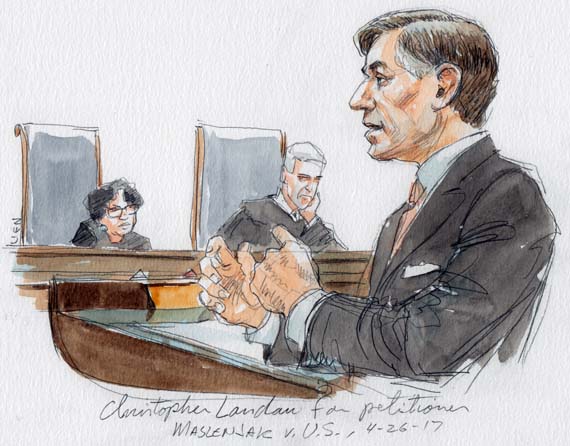 Justice Samuel Alito echoed this sentiment. He told Landau that requiring the government to show that it would have rejected Maslenjak’s citizenship application if it had known the truth would be an “awfully hard” burden for the government to bear, because “even if somebody says something that has a real potential to affect the naturalization decision, you would still have to go back and show that in this case it actually did make a difference.”

And other justices were skeptical that, even if the court were to adopt the rule that Maslenjak herself urged and require the lies to be material, Maslenjak could prevail. Justice Ruth Bader Ginsburg asked Landau, “Why isn’t this obviously material?” Maslenjak, Ginsburg observed, lied to U.S. government officials about her husband’s activities in Bosnia. “She said he was trying to avoid military conscription when, in fact, he was in the service and in the unit that was committing atrocities. Under what circumstances,” Ginsburg went on, “would that be immaterial?”

Alito seemed to agree. He asked Landau whether the jury in Maslenjak’s case could also hear evidence about her husband’s military service in Srebrenica, the town where Bosnian Serb soldiers killed over 8,000 Muslim men and boys in 1995. If so, Alito suggested, “I don’t know how well you are going to do” in front of the jury. Landau agreed with Alito that Maslenjak would have a “tough row to hoe” on remand, but he argued that his client at least deserved a chance to have the jury decide whether her lies were material.

Chief Justice John Roberts had been largely silent during Landau’s argument. Robert Parker, the assistant to the U.S. solicitor general who argued on behalf of the federal government, quickly learned why. Roberts is generally no friend of criminal defendants, but he has often expressed concern about federal laws that give too much leeway to prosecutors, thereby creating the potential for abuse and uneven enforcement. Today was one of those days.

Roberts noted that one question on the naturalization application form asks whether the applicant has “ever committed, assisted in committing, or attempted to commit a crime or offense for which you were not arrested.” “Some time ago,” Roberts confessed, “outside the statute of limitations, I drove 60 miles per hour in a 55-miles-per-hour zone. I was not arrested.” “Now you say that if I answered that question no, 20 years after I was naturalized as a citizen,” he declared incredulously, “you can knock on my door and say, guess what, you’re not an American citizen after all.” 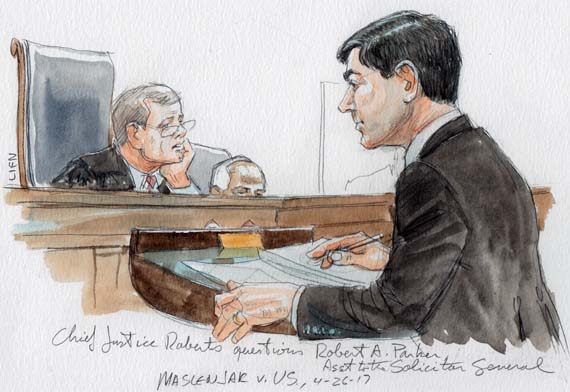 Parker tried to offer Roberts some assurances that the hypothetical naturalized scofflaw would have little to fear, but he didn’t make much headway. “So you really are looking for the listing of every time somebody drove over the speed limit,” Roberts concluded.

Justice Sonia Sotomayor piled on, asking Parker whether failure to disclose a childhood nickname – another question on the naturalization application form – could constitute cause to take away someone’s citizenship.

Parker pushed back, reassuring Sotomayor that the government was not interested in childhood nicknames. However, Justice Stephen Breyer retorted that, even if Sotomayor’s example could be distinguished, “that isn’t the point.” The point, Breyer emphasized, is that the questions on naturalization application form are “unbelievably broad.” “To me,” Breyer said, “it’s rather surprising that the government of the United States thinks that Congress is interpreting this statute and wanted it interpreted in a way that would throw into doubt the citizenship of vast percentages of naturalized citizens.”

Perhaps thinking of the difficulties that might follow from requiring a lie to be “material,” Breyer suggested some alternative standards, potentially less onerous for the government, that would still call for a connection between the lie and the naturalization decision. What about requiring that the lie “had a tendency to affect a reasonable immigration officer in his judgment” or “influence the decision”? All those are wrong? he queried.

Breyer later admonished Parker that the government’s interpretation “would raise a pretty serious constitutional question” when it could take away someone’s citizenship “because 40 years before, he did not deliberately put on paper what his nickname was, what his speeding record was 30 years before that, which was, in fact, totally immaterial.”

Roberts added that it might not be a constitutional problem, but “it is certainly a problem of prosecutorial abuse.” Given the wide range of questions on the naturalization form, he observed,  the government’s position would mean that government officials would have “the opportunity to denaturalize anyone they want, because everybody is going to have a situation where they didn’t put in something like that.” “And then the government can decide,” Roberts warned, “we are going to denaturalize you for reasons other than what might appear on your naturalization form, or we’re not.” For Roberts, giving that “extraordinary power, which essentially is unlimited power,” to the government would be “troublesome.”

Kennedy was also clearly uneasy about the government’s interpretation. Your argument, he admonished Parker, is “demeaning” to the “priceless value of citizenship.” Kennedy added, “you are arguing for the government of the United States, talking about what citizenship is and ought to mean.”

Landau tried to capitalize on this unease in his rebuttal, telling the justices that “the questioning today makes it chillingly clear that the government’s position in this case would subject all naturalized Americans to potential denaturalization at the hands of an aggressive prosecutor.” And that, Landau concluded, “is not what Congress intended” and “not what is in the language of the statute.” Even if the justices agree, Maslenjak may not be home free, because the government would almost certainly try to show that her lies would have influenced immigration officials’ decision to grant her citizenship – which, the justices seemed to suggest today, might not be a particularly difficult task. But she does seem likely to at least get what Landau asked for today: “an opportunity to debate” that issue in front of a jury.