The law of asset forfeiture has become intricate and complicated since Congress enacted and subsequently amended several forfeiture statutes, beginning in 1970. Some of those complexities were explored in Wednesday morning’s argument in Honeycutt v. United States. But as Assistant to the Solicitor General Brian Fletcher finally pointed out to the court, some 40 minutes into the argument, much of the discussion was “ancillary … [to] the question presented.” Perhaps the justices were tired from the preceding hour of argument in a difficult Brady case, or perhaps Honeycutt is truly one of the “easy” cases this term. But the court did not seem troubled or divided by Honeycutt’s argument that a defendant who did not obtain proceeds from a crime cannot be ordered to forfeit under a statute, 18 U.S.C. § 853(a), whose text requires forfeiture of “proceeds the person obtained.”

By hypothesis, Honeycutt obtained no proceeds, but he was ordered to forfeit $70,000

As previewed, the petitioner, Terry Honeycutt, was a salaried clerk working at a hardware store owned by his brother Tony and their father. Over a couple of years, the store sold more than 15,000 bottles of a water-purifying product that can also be used to manufacture methamphetamine, turning a profit of roughly $270,000. The Honeycutt brothers were indicted for conspiring to distribute this controlled substance precursor; Tony reached a plea agreement with the government that included forfeiture of $200,000. Terry went to trial and was convicted; at sentencing, the government went after Terry for the remaining $70,000.

Terry opposed any forfeiture, arguing that he had not received, or “obtained,” even “indirectly” (as the statute allows), any of the profits from the unlawful sales. The government apparently did not seek to prove otherwise. Instead the government invoked federal appellate precedents holding that co-conspirators can be ordered to forfeit even assets they have not “obtained,” under a “joint and several liability” theory. That theory is an application of the federal Pinkerton rule, which permits conspirators to be convicted for the foreseeable crimes of their co-conspirators. Since 1970, a number of federal circuits have applied the Pinkerton concept to Section 853 forfeitures as well, although the U.S. Court of Appeals for the D.C. Circuit ruled the other way in 2016. Relying on its own precedent, the U.S. Court of Appeals for the 6th Circuit reversed the district court’s decision not to impose forfeiture on Terry Honeycutt, even if there was no evidence that he had “obtained” any of the proceeds of the conspiracy.

An unusually uncontroversial argument on behalf of the petitioner

Representing Honeycutt, Adam Unikowsky said he would begin “with [his] textual argument.” But (somewhat surprisingly to me) he then immediately “focus[ed]” instead “on the structure” of the statutory scheme, rather than the textual meaning of “obtained” in Section 853(a). Still, Unikowsky was permitted to continue for an unusually long period without interruption by the justices. Justice Elena Kagan asked a single clarifying question, and it was not for some time, when Unikowsky began to discuss Section 853(p) and the forfeiture of “substitute assets,” that Chief Justice John Roberts began to question him mildly about that subsection (a subsection not at issue in this case). The argument had still not focused explicitly on what the statutory term “obtained” in Section 853(a) does or doesn’t mean. 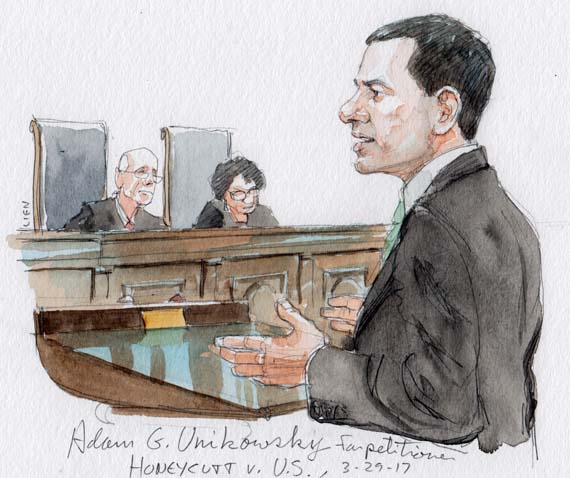 Perhaps the textual point in this case is so clear and easy that Unikowsky and the justices felt it a better use of their time to pursue the implications of a ruling for Honeycutt on other aspects of forfeiture law. Unikowsky also did something that many advocates find difficult: He repeatedly made gentle concessions to the justices on tangential points, thus defusing potential disagreements and staying focused on the heart of his argument. For example, when Justice Samuel Alito pointed out that it can be difficult to identify precisely who has obtained what in a criminal conspiracy, Unikowsky ultimately responded that “I can’t deny that there’s probably some … cases where forfeiture will be harder under our rule.” Unikowsky went perhaps too far afield at one point, suggesting that assets can be traced among conspirators by “tak[ing] depositions,” to which Alito responded with a candid “Oh, come on.” But clearly perceiving that the argument was going his way, Unikowsky reserved the remaining time for rebuttal after only half of his argument time had passed.

The solicitor general is treated with respect, but not agreement

Arguing for the United States, Assistant to the Solicitor General Brian Fletcher did not enjoy such an easy time. Although showing respect for the solicitor general’s difficult job of overseeing the lawful administration of a complex web of forfeiture mechanisms, the justices seemed unmoved by Fletcher’s invocation of history, structure, or inter-relationship with other forfeiture provisions. Ranging from Roberts (“I’m not sure that works”) to Justice Stephen Breyer (“Where does it say that?”) to Justice Sonia Sotomayor (“I’m having trouble with one component of your argument, many, but one … for the moment”), the justices uniformly expressed mild disagreement with Fletcher’s position.

In his opening argument, Unikowsky had asserted that “what the government is … saying [is] that it thinks it makes sense as a matter of policy” to have joint and several liability (but that the text, structure, and history of forfeiture do not support that position). And indeed, in response to pressing questions from the justices, Fletcher found himself making policy arguments more than once, saying, for example, “[L]et me explain why I think that makes sense,” and “[W]e think a system that instead makes” joint and several liability the rule for “forfeiture … is a more sensible way to” interpret Section 853(a). These arguments brought to mind once again Judge Karen Moore’s concurring opinion in the 6th Circuit, in which she pointed out that “it would seem to be Congress’s job to provide an expanded mechanism for obtaining forfeiture” if in fact such a system does make sense.

The advocate’s hardest job: giving back time in rebuttal

Roberts invited Unikowsky to return for rebuttal with words seldom heard at the court: “15 minutes.” Relative to most Supreme Court arguments, that is an eon of remaining time. Yet I think most advocates would savor every minute of a rare opportunity to argue at this level. No doubt Unikowsky went on longer than he needed to – and was asked only five unhostile questions — and still he sat down with at least three minutes left on the clock.

Although it is always possible that there is unexposed disagreement among the justices, there was no sign of it at this argument. Still, an assignment to draft one of the court’s not-uncommon unanimous opinions brings both relief and trepidation. Relief because the assignment is not fraught with worry of capturing five votes. Yet trepidation because the opinion has to be simple enough to retain the promised consensus, but also careful enough to avoid making “bad law” in the absence of challenge from a dissenting justice.

I would expect a narrow, text-based opinion ruling for Honeycutt, issued as soon as the assigned justice can get it out. Shall I hazard a guess? At this point in the term, my NCAA bracket is more likely to be correct. But I’ll say this: Justice Clarence Thomas, who as usual asked no questions, is generally a speedy writer, a textualist, and a past critic of overbroad forfeiture arguments.