When Stacy and Brent Fry obtained a goldendoodle for their five-year-old daughter, E.F., in 2009, they could not possibly have imagined that they would find themselves, seven years later, at the U.S. Supreme Court. But that is exactly where they were at the end of October, listening to the justices debate their case. The case began as a dispute over whether E.F., who has cerebral palsy, could bring the dog, named Wonder, to kindergarten with her, but it eventually became a clash over a fairly technical question about the interaction among a group of laws intended to assist people with disabilities.

Today the court issued a unanimous decision in the Frys’ favor. It ruled that, when families like the Frys file lawsuits under the Americans with Disabilities Act or the Rehabilitation Act, which bar discrimination against both adults and children with disabilities, they do not need to first go through the administrative proceedings required by the Individuals with Disabilities Education Act, which ensures that children with disabilities receive the special education services that they need, unless the focus of the lawsuit is an allegation that the student did not receive the “free appropriate public education” guaranteed by the IDEA. Put another way, this means that a student who alleges that a school has discriminated against her because of her disability is not required to use the IDEA’s administrative proceedings simply because the alleged discrimination happened at school.

In this case, the local school district refused to allow E.F. to bring Wonder to school with her, suggesting that E.F.’s human aide could do everything that Wonder could do – from picking up the things that E.F. dropped to assisting her with her coat and helping her in the bathroom. The Frys eventually negotiated a brief trial period, during which Wonder could accompany E.F. for parts (but not all) of her day, but when that trial period ended, the school district barred Wonder from coming to school with E.F. 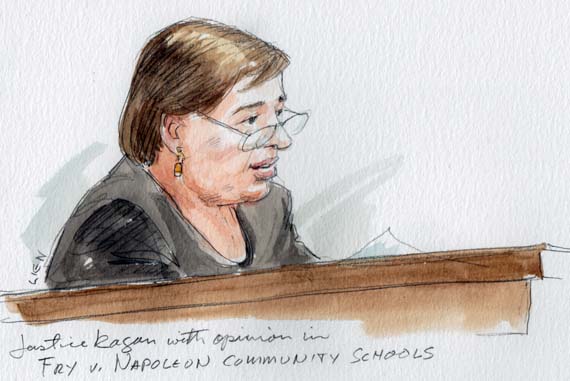 In 2012, the Frys filed a lawsuit in a federal district court in Michigan. They alleged that the school district’s refusal to allow Wonder to accompany E.F. to school violated both the ADA and the Rehabilitation Act, and they asked the court to award them damages for the “social and emotional harms” that the school district’s actions caused E.F. But the district court dismissed the case, pointing to a federal law that requires a family “seeking relief that is also available under” the Individuals with Disabilities Education Act to avail themselves of all possible administrative remedies under the IDEA before filing a civil lawsuit pursuant to the Constitution, ADA, or Rehabilitation Act. The U.S. Court of Appeals for the 6th Circuit affirmed.

In an opinion by Justice Elena Kagan, the Supreme Court reversed. The court first considered the text of the federal law requiring a plaintiff to begin with the IDEA’s administrative proceedings if she is seeking “relief” that is “available” under the IDEA. Under the IDEA, the court reasoned, the only “relief” that is “available” is the “free appropriate public education” (FAPE) that the law guarantees. This means that a plaintiff must first use the IDEA’s administrative proceedings only if she contends that she has been denied a FAPE. That rule makes sense, the court explained, because the hearing officer in an IDEA proceeding cannot provide any other kind of relief. “And that is true,” the court emphasized, “even when the suit arises directly from a school’s treatment of a child with a disability—and so could be said to relate in some way to education.”

But if a plaintiff must begin with the IDEA proceedings only when she is alleging that she has been denied a FAPE, the court continued, how are courts supposed to decide when the plaintiff is seeking relief for the denial of a FAPE and when she is not? A court must look, Kagan explained, at the “gravamen” or “essentials” of the complaint, rather at whether the complaint uses specific “magic words.” And today’s opinion provided some guidance, instructing courts to pose “a pair of hypothetical questions: First, could the plaintiff have brought essentially the same claim if the alleged conduct had occurred at a public facility that was not a school—say, a public theater or library? And second, could an adult at the school—say, an employee or visitor—have pressed essentially the same grievance?” If those questions can be answered in the affirmative, today’s ruling posited, then “a complaint that does not expressly allege the denial of a FAPE is also unlikely to be truly about that subject.”

In deciding whether the “gravamen” of a plaintiff’s complaint is the denial of a FAPE, Kagan noted, courts should also look at the history of the entire dispute. If a plaintiff has at some point begun administrative proceedings under the IDEA “before switching midstream,” that “initial choice” “may suggest that she is indeed seeking relief for the denial of a FAPE.”

Under the test outlined today, the court explained, it seems entirely possible that the Frys may not have been required to go through the IDEA’s administrative proceedings before filing their lawsuit in federal court. Their lawsuit does not argue that E.F. did not receive a FAPE; rather, the family “could have filed essentially the same complaint if a public library or theater had refused admittance to Wonder,” and an adult who visited E.F.’s school “could have leveled much the same charges if prevented from entering with his service dog.” But, the court continued, it did not have enough information to make that determination conclusively – for example, it reasoned, “the record is cloudy” as to whether the family had tried to pursue administrative remedies before filing its case. The court therefore sent the case back to the lower courts for them to resolve the question. Even if the court did not hand E.F. and her family a complete victory, however, it was nonetheless a significant win – not only for E.F. and her family, but also for children with disabilities nationwide.