At today’s oral argument in Packingham v. North Carolina, a challenge to a state law that imposes criminal penalties on registered sex offenders who visit social networking sites, Justice Elena Kagan suggested that social media sites like Facebook and Twitter were “incredibly important parts” of the country’s political and religious culture. People do not merely rely those sites to obtain virtually all of their information, she emphasized, but even “structure their civil community life” around them. Justice Ruth Bader Ginsburg echoed those sentiments, telling the North Carolina official defending the law that barring sex offenders from social networking sites would cut them off from “a very large part of the marketplace in ideas.” Kagan was perhaps the most vocal opponent of the law, but by the end of an hour of oral argument it seemed very possible that Ginsburg and at least three of Kagan’s other colleagues would join her in striking down the North Carolina law.

The first half of the oral argument was not entirely smooth sailing for attorney David Goldberg, who argued on behalf of Lester Packingham. Packingham, who was required to register as a sex offender after he pleaded guilty to taking “indecent liberties” with a minor, ran afoul of the North Carolina law when he praised God on Facebook for the dismissal of his traffic tickets. Goldberg complained that the law bans “vast swaths of core First Amendment activity” that have nothing to do with the government’s professed purpose of preventing sex offenders from using social media sites to gather information that they can then use to target minors for sexual abuse. The law targets speech on some of the platforms that Americans use most often—indeed, Goldberg noted, under the law Packingham could not even use Twitter to read the myriad messages discussing his own case—and imposes punishment without regard to whether the sex offender has actually done anything wrong. 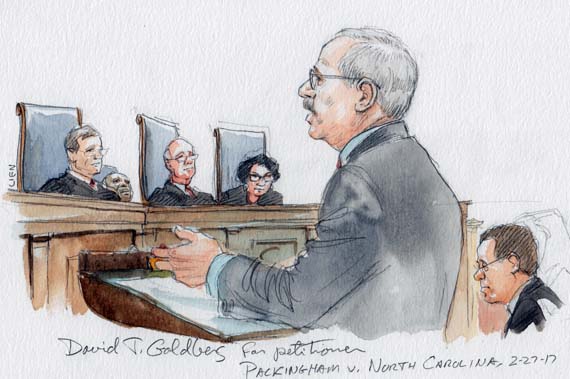 But Goldberg ran into resistance from justices of all ideological stripes, some of whom suggested that perhaps the ban could survive if the court interpreted it narrowly—for example, as Justice Samuel Alito posited, by reading it as limited to “core social networking sites” like Facebook or Google Plus. Justice Stephen Breyer also seemed open to this possibility, telling Goldberg that perhaps the law could be interpreted as barring sex offenders from visiting a site that allows people to meet or exchange information.

Even Ginsburg and Kagan did not seem at first to regard the law as completely flawed. Ginsburg observed that states impose other restrictions—such as taking away the right to vote or to own guns—on the fundamental rights of convicted criminals. And responding to a hypothetical about whether states could require sex offenders to agree to have their social media monitored for communications with minors, Kagan noted that it is “not unheard of in First Amendment law” to have prophylactic rules when – as here – North Carolina argues that it lacks the resources to engage in such monitoring.

But the tide seemed to turn when Robert Montgomery, the senior deputy attorney general representing North Carolina, took the lectern. Montgomery pushed back against the depiction of social media sites by Kagan and Ginsburg (among others) as a “crucial channel” of communication. He emphasized that sex offenders subject to the law would have other alternatives, such as podcasts, blogs and The New York Times. That seemed to convince Alito, who would later express doubt about whether there were no other alternatives: He told Goldberg dryly that “I know there are people who think life was not possible without Twitter and Facebook.” 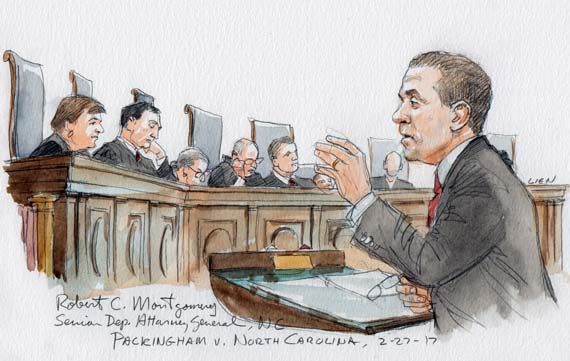 Other justices, however, were more skeptical about the state’s arguments. Justice Sonia Sotomayor questioned the premise that the law is necessary to prevent sexual abuse of minors. She told Montgomery that he was building “layer upon layer of speculation” or statistical inferences. The law doesn’t apply only to people who used the Internet to commit a sexual offense, she stressed, but instead applies to everyone. Where is the basis, she queried, for the inference that a sex offender like Packingham would use the Internet to commit another crime? These restrictions are particularly problematic, she continued, when would-be criminals can use the Internet for “almost anything,” including finding a bank to rob.

Breyer joined the fray, telling Montgomery that legal texts are filled with cases upholding the right to say dangerous things. Here, he asked dubiously, when faced with a scenario in which people might say something dangerous, the state’s remedy is to cut off the speech altogether? It seems to be well-settled law, he concluded, that the state can’t do so unless there is a “clear and present danger.”

And perhaps most critically for the state, Justice Anthony Kennedy was unconvinced by the state’s efforts to rely on a 1992 case in which the justices upheld a Tennessee law that imposed a ban on soliciting votes or distributing campaign materials within 100 feet of a polling place. The court in that case ruled that the ban served the state’s interest in protecting its citizens’ right to vote freely, but Kennedy today dismissed the Tennessee ban as “not analogous” to North Carolina’s. If that is the best you have, he seemed to be saying to Montgomery, “I think you lose.”

If Kennedy is indeed on board, then Packingham seems to have five votes in favor of striking down the North Carolina law. A decision in the case is expected by summer; if Packingham does prevail, he can read about the ruling not only on the SCOTUSblog website, but also on our Facebook and Twitter feeds.