Argument analysis: Is the statutory phrase “crime of violence” in the immigration laws void for vagueness?

Yesterday, the Supreme Court heard oral argument in Lynch v. Dimaya, a criminal-removal case. The court has taken up several of these in recent years, including Esquivel-Quintana v. Lynch, which the justices will hear next month. Unlike some of the other cases, however, this case involves a constitutional challenge to a criminal-removal provision in the immigration laws, which historically have been held immune from constitutional scrutiny.

Immigrants convicted of an “aggravated felony” are subject to mandatory removal. The definition of an aggravated felony under the Immigration and Nationality Act incorporates by reference 18 U.S.C. §16(b). Section 16(b) defines a “crime of violence” to encompass “any … offense that is a felony and that, by its nature, involves a substantial risk that physical force against the person or property of another may be used in the course of committing the offense.”

The cornerstone of the legal challenge to Section 16(b) is the court’s 2015 decision in Johnson v. United States, which struck down as unconstitutionally vague the Armed Career Criminal Act’s definition of “violent felony.” That definition included crimes that “involve conduct that presents a serious potential risk of physical injury to another.”

A lawful permanent resident, James Garcia Dimaya was convicted in two California burglary cases, neither of which involved violence. Based on the convictions, the U.S. government sought to remove Dimaya from the United States. In a rare invalidation of a removal provision of the U.S. immigration laws, the U.S. Court of Appeals for the 9th Circuit concluded that Section 16(b) was void for vagueness and reversed the agency’s removal order.

Arguing for the United States, Deputy Solicitor General Edwin Kneedler defended the constitutionality of Section 16(b). Kneedler first argued that the court of appeals erred in applying the due process clause’s prohibition of vagueness in criminal statues to a civil immigration law, largely because of the “close relation of immigration to foreign relations and national security.” He also maintained that even after Johnson, Section 16(b) would survive a vagueness challenge. To support that argument, Kneedler relied heavily on the court’s 2004 opinion in Leocal v. Ashcroft, which held that driving under the influence is not a violent crime that warrants removal under Section 16(b), and which went on to state that the “classic example [of a crime of violence] is burglary.” 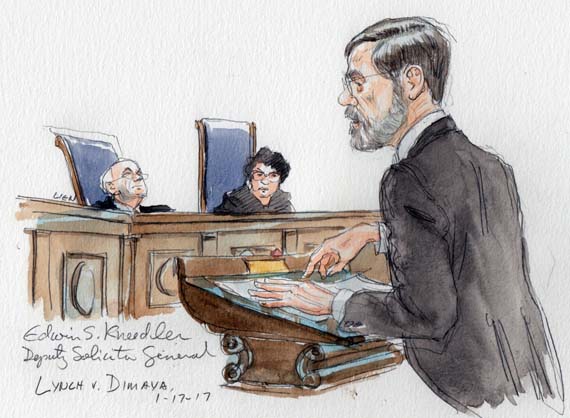 Justice Ruth Bader Ginsburg reminded Kneedler that the government had argued in Johnson that Section 16(b) would be “vulnerable” if the court decided that the ACCA residual clause was invalid, “because it was subject to the same central objection.” Kneedler tried to distinguish Johnson, but Justices Ginsburg, Sonia Sotomayor and Elena Kagan did not seem convinced by the claimed distinctions.

Kneedler went on to argue that burglary historically has been treated as a crime of violence, “because of the risk of force that might be used.” Assuming her law professor mode, Kagan asked whether vehicular flight might also constitute a crime of violence. Pushing back against Kneedler’s characterization of burglary, Sotomayor pointed out that not all burglaries involve violence.

Justice Anthony Kennedy brought Kneedler back to his first argument and the court’s 1951 decision in Jordan v. DeGeorge, which rejected a vagueness challenge to a provision of the immigration laws that authorizes removal of an immigrant for “any crime of moral turpitude.” Kennedy noted that Jordan supported Dimaya’s argument for constitutional review. Kneedler suggested that Jordan was a “drive-by ruling,” in which the court decides something not fully briefed and argued by the parties.

Ginsburg noted that the immigration court in Dimaya’s case also ruled that “these burglaries qualified as crimes of moral turpitude,” and asked Kneedler whether that was the case. She may have been pointing to an alternative ground that could subject Dimaya to removal even if he were to prevail here.

Representing Dimaya, E. Joshua Rosenkranz defended the 9th Circuit’s conclusion that Section 16(b) was unconstitutionally vague. He contended that the vagueness doctrine applies to the immigration laws, as clearly held by Jordan v. DeGeorge. 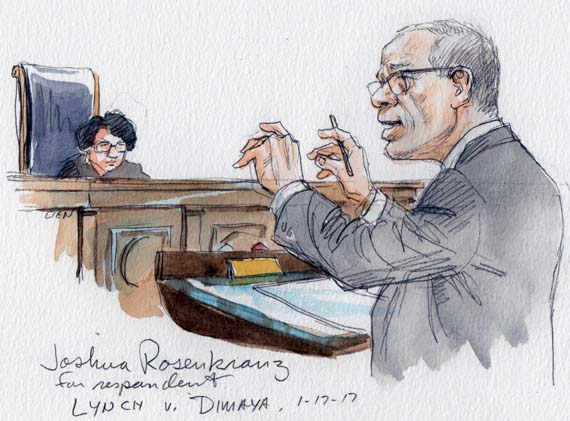 Justice Kagan asked Rosenkranz whether the interpretation of Section 16(b) differed from the interpretation of the statutory provision at issue in Johnson; she noted that courts did not seem to be having similar problems coming to grips with Section 16(b). Rosenkranz responded that the government’s argument that there was no real dispute over which crimes were included in Section 16(b) was “revisionist history.” He cited a number of lower-court splits about whether various crimes were “crimes of violence.” Chief Justice John Roberts and Ginsburg also suggested that the statutory provisions were somewhat different, but Rosenkranz maintained that the two provisions said the same thing in different words.

Several justices seemed concerned about the scope of a possible ruling in Dimaya’s favor. In response to a question from Justice Samuel Alito, Rosenkranz said that a statute criminalizing a “crime of moral turpitude” would be constitutionally problematic. Alito pounced on that claim, pointing out that that precise removal provision had survived a vagueness challenge in Jordan. Alito then peppered Rosenkranz with questions about whether removal based on convictions for a DUI, failing to file tax returns, and unlawful entry into the United States also might be subject to challenge.

Along similar lines, Justice Stephen Breyer worried about the consequences of extending the void-for-vagueness doctrine into the civil context. Rosenkranz focused on how deportation and its life-altering consequences made application of the vagueness doctrine appropriate. Alito retorted that many other civil decisions, such as those involving child custody or loss of a professional license or a home, can have grave consequences.

In response to a question from Ginsburg, Rosenkranz discounted as dicta the court’s statement in Leocal that burglary was a crime of violence under Section 16(b).

In sum, no justice seemed willing to overrule Jordan v DeGeorge and its review of removal provisions under due-process vagueness standards. This apparent unwillingness suggests that we could see an opinion reaffirming constitutional review of the immigration laws, which is a rarity in immigration law. The modern consequences of criminal convictions – namely, removal – may well bolster the need for such review. Even if the justices are willing to apply due process scrutiny to Section 16(b), however, they appear to be divided as to whether this case is distinguishable from Johnson v. United States and whether Section 16(b) is void for vagueness.