Yesterday’s argument in State Farm Fire & Casualty Co. v. United States ex rel. Rigsby brought the justices once again to the False Claims Act, a 19th-century statute that permits private “relators” who learn of fraud in federal government contracts to file suit against the malfeasant contractor. Although the private “relators” bring those suits initially, they give notice to the federal government, which can take control of the litigation if it wishes. If the government takes control of the litigation, the relator receives 15-25% of any award; if the government declines to take control, the relator receives 25-30% of any award.

This case involves the “seal” requirement of the False Claims Act, which requires complaints to be filed under seal so that the government can decide whether to take control of the litigation before the allegedly malfeasant contractor learns of the lawsuit. Among other things, that minimizes the risk that the defendant’s knowledge of the suit might compromise ongoing criminal investigations that the government would prefer remained secret. The False Claims Act does not state, however, what happens if a relator violates the seal requirement.

This case presents that problem. The litigation involves government-backed flood-insurance policies administered by State Farm. The relators, respondent Cori Rigsby and others, were claims adjusters involved with those policies in the aftermath of Hurricane Katrina. They allege a scheme in which State Farm fraudulently misclassified losses from wind damage (payable under State Farm’s own policies) as losses from flood damage (payable by the government under the federal flood-insurance program). The relators eventually filed this suit presenting those allegations; after a trial, the district court found State Farm liable for defrauding the United States.

The case is before the court because years ago, long before the trial, while the complaint remained under seal, the relators’ attorney sent evidence about the case to a variety of news organizations and media representatives. Those disclosures violated the seal requirement, and State Farm accordingly argues that the lower courts should have dismissed the case. Specifically, State Farm argues for a mandatory rule under which courts must dismiss all False Claims Act complaints whenever the relators violate the seal requirement.

Although the argument left much unclear, the justices appeared skeptical of the mandatory rule pressed by Kathleen Sullivan, representing State Farm. The justices who addressed the question at all seemed to suggest that the wide variety of possible violations made a mandatory dismissal rule inappropriate. Justice Samuel Alito, for example, pressed Sullivan as to how she could justify dismissal in a “case where the disclosure is very limited, seen by only one person, let’s say; it was inadvertent, it was not done in bad faith, and it causes no harm.” 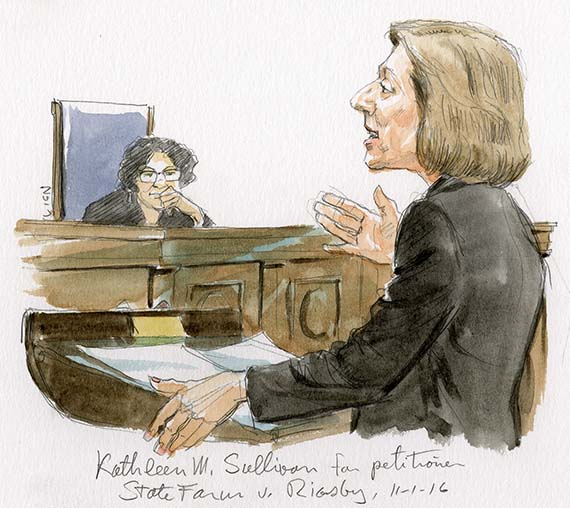 Justice Stephen Breyer took up that point and pressed it even further, explaining that “[m]y thought was the same as Justice Alito’s: vast range of violations. Some don’t hurt really at all.  Some are sort of accidental. Some are certainly not bad faith and they didn’t cause much trouble.  Really, why dismiss the case?” Additional observations from Breyer explored various reasons for concluding that the question is well suited to the district judge’s discretion:

“Life is complicated. There are all kinds of factors, and these factors affect the basic fairness of the situation, which is something that judges should look to as well. Like many, many, many decisions, this is conferred upon the district court to make a fair decision in light of the circumstances, to be reviewed by abuse of discretion.”

The bulk of the argument, then, was consumed with the question of what the proper standard should be for determining when dismissal is required for a violation of the seal requirement. Two issues dominated that discussion. First, several of the justices seemed to think that the government’s view as to the propriety of dismissal should be crucial to, if not directly dispositive of, the determination. That idea was problematic for State Farm, because the government participated in the argument in support of the relators, arguing that dismissal was not appropriate. Justice Ruth Bader Ginsburg suggested early on in Sullivan’s presentation that “if it’s a condition for the government’s benefit, the government can waive it.” And Chief Justice John Roberts commented wryly a few moments later that Sullivan seemed to be “arguing the government’s interests, but it rings a little hollow when we see the government is on the other side.”

Justice Elena Kagan pressed a similar perspective late in Sullivan’s argument, positing a case with “a pretty minor breach that was not likely to cause any harm, and in fact did not cause any harm, and the government comes in to the district court and says ‘it’s not in our interests for this case to be dismissed.’ Why should the court nonetheless dismiss the case?” Reasoning from that hypothetical, Kagan asked, “why shouldn’t the primary factor [in deciding whether dismissal is appropriate] just be what the government wants? In other words, given that the government is the beneficiary of this provision, why shouldn’t we give very significant discretion to the government?”

Sullivan also addressed  the question whether the relevant “harm” should be the harm that the disclosure actually caused or the harm that would have seemed likely given the nature of the breach. She contended that the lower courts in this case erred by discounting the severity of the breach because it turned out in fact not to cause any harm to the government. Several of the justices seemed concerned about the proper way to address that problem, resulting in a protracted discussion with John Bash, appearing on behalf of the United States. Bash explained that the court should defer to the government on the question of actual harm (because the government is the one that would suffer any relevant harm), but that courts should separately consider the “severity” of the violation, which would be determined as of when the violation occurred.

As I mentioned in my preview, it is quite difficult to gain an affirmance in a case in which the justices are called upon to define a multi-factor standard. The justices naturally care much more about the details of the standard and much less about applying it to a particular case.  Accordingly, in part because it helps to build consensus for a majority opinion, it has become increasingly common in these cases for the court to vacate the decision of the lower court, even in cases in which the standard that the court adopts differs little from the standard applied by the lower court.

Much of the argument this morning suggested that this is a possible outcome here, with the justices articulating a standard and leaving it up to the court of appeals to decide if the new standard compels a departure from the existing decision against State Farm. For example, Breyer at one point commented to Sullivan that “I don’t have to worry about this case; you do.” He suggested, rather, that the only thing about which he is concerned is “the right standard to write an opinion.”

During the arguments of Bash and of Tejinder Singh (representing the relators), several of the justices seemed to be asking for advice about what to say in the opinion. For example, recognizing the role that seals play in other contexts, Breyer evinced concern that an opinion excusing the violation would seem “too light a sanction.” On that point, he asked Singh, “what would you want me to add to say that [the district court] was not overly lenient here?” The justices also pressed Bash with questions such as whether “it might be helpful to clarify” the standard for harm (Kagan’s question) and even “how to write the ideal Platonic opinion” (Justice Anthony Kennedy’s question). 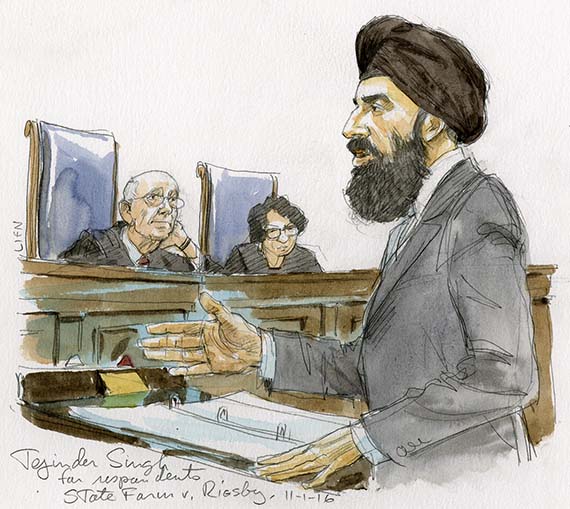 One final twist to note is the possibility that the question of the standard that should guide district court discretion might not be before the court. Sullivan insisted in a colloquy with Roberts that her client had preserved at every stage the “fallback” position that even in the absence of a mandatory rule of dismissal (State Farm’s preferred position), the proper discretionary standard would compel dismissal in this case. Yet Bash just as firmly advised Kagan that in his view State Farm’s petition did not squarely present that question.

This case seems to be one that, as they say, is likely to “come out in the writing.” The justices will vote on a tentative outcome by the end of the week, but given the multiplicity of relevant factors, little will be clear about the actual impact this case will have until the justices try to settle on a consensus standard over the winter.