The president’s gestures of respect

For two brief, but historic, moments, President Barack Obama and Michelle Obama brought the nation’s tribute to the late Justice Antonin Scalia in the Supreme Court’s Great Hall. The first gesture of respect came from them behind a red rope, in front of a marble bust of the seventh Chief Justice, Morrison R. Waite. who served in the late nineteenth century.  The two stood for one minute facing the flag-draped coffin, heads bowed.

The president then touched the first lady’s arm, and they moved together to spend a minute in front of the Scalia portrait just outside the courtroom.  The president twice leaned over to Michelle Obama, whispering about the image.  She nodded. 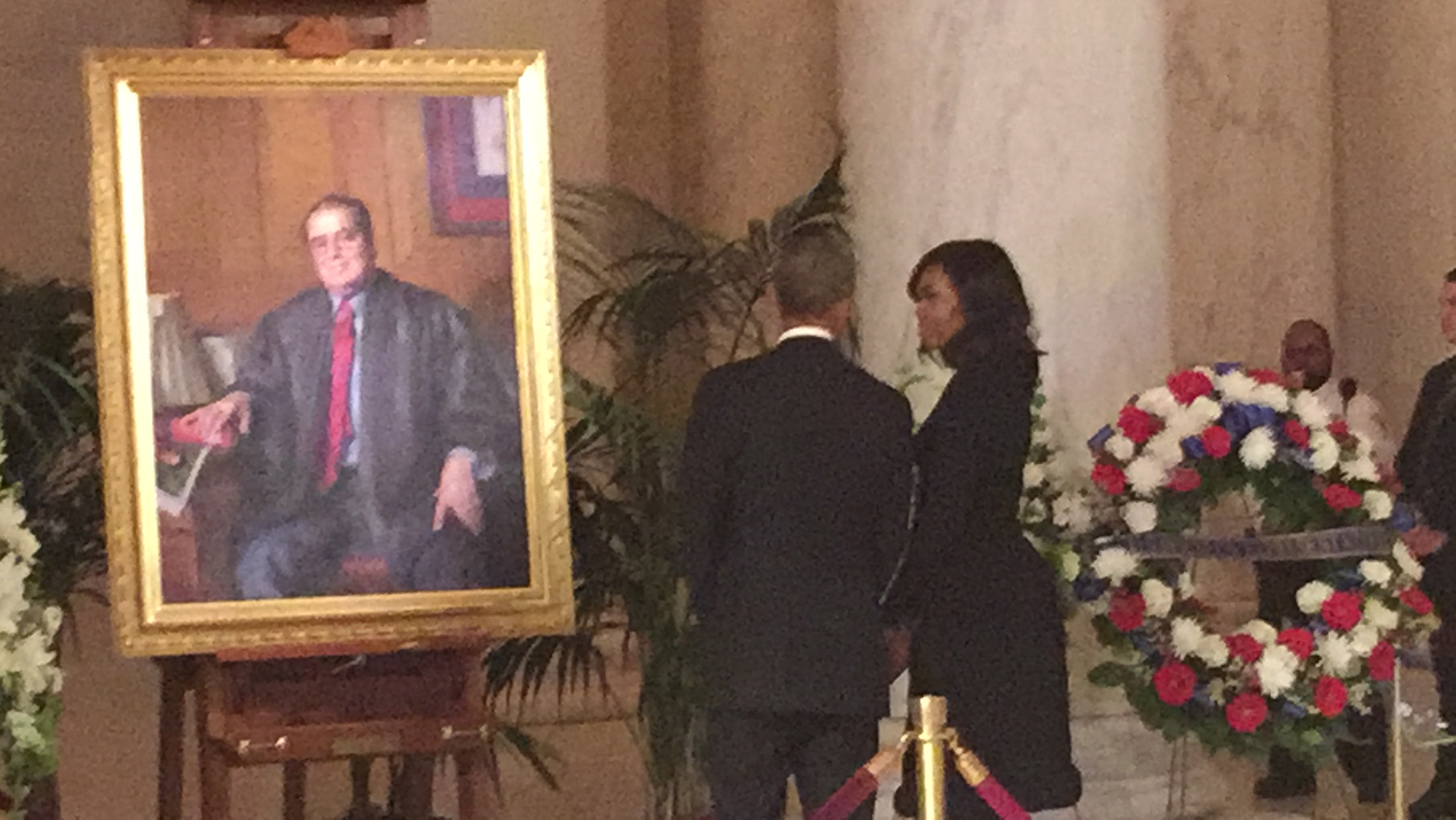 The first couple were in the courthouse for about a half-hour, after being greeted at the front of the courtroom by Chief Justice John G. Roberts, Jr.  The Chief Justice then led them into the office that the Court provides as a courtesy to the U.S. Solicitor General and the staff of that office of lawyers who speak for the United States before the Court.

There the Obamas met with one of Scalia’s sons, Matthew, and his wife and their children.  From there, the Court’s Marshal, Pamela Talkin, escorted them to the Great Hall.

While the president was in the building, the line of visitors who had come for the public viewing was halted.  And, when the Obamas entered the Great Hall, the detail of former Scalia clerks then taking their turns in a vigil, and two Court police officers in their assignments as an honor guard, remained at their posts longer than the designated times, so as not to disturb the scene for the president.

Throughout the public viewing, the honor guard stood silently and then, when relieved of their turn, slowly saluted the coffin before departing.

The public viewing schedule was extended by an hour, to 9 p.m., because of the delay during the Obamas’ visit.  By mid-afternoon, about 3,000 people had passed by the coffin.  At some points during the day, the waiting line stretched for at least a block beyond the Court’s front veranda.

Although the public viewing will end Friday night, the vigils of the clerks — four at a time — and the presence of the police honor guard will continue through the night.

Meanwhile, the Court indicated that the memorial tribute to Scalia — in the form of black drapes over his chair and at his place on the bench, as well as over the courtroom entrance, will remain in place until March 14.  That is thirty days after his death.

The Justices will leave his place on the bench as is during that time, and thus will not take their new places on the bench — all but the Chief Justice moving to opposite sides — until the tribute is over.  Thus, during the Court’s next public sitting, which begins Monday and continues through March 7, the Justices will continue in the seats they have held in recent Terms.

When the memorial period is over, the Justices will take their new seats, for the sitting beginning March 21, and there will be an empty spot at the right side of the bench, reserved for a new, junior Justice if the political branches can agree to provide one.

Posted in Justice Scalia passes away