Argument analysis: A “big deal” for a small town? Or not so big?

The image of an Indian tribe, ominously hovering on the edge of town with ambitions to take over.  Or the picture of a pitifully small Indian tribe wanting only to hang onto a heritage of lands it can call home.  Those were the conflicting visions lawyers tried to create for the Supreme Court on Wednesday in Nebraska v. Parker.  The Justices, though, were decidedly more sympathetic to the tribe; they simply could not imagine the worst for the small town of Pender, Nebraska.

“The question is: who’s got the power to govern?” a lawyer speaking for the town asked as the argument was coming to a close.  “The people in Pender, this is a big deal.  It’s a big deal whether a tribal council has authority over us.”

The Justices were not without sympathy, but they did not seem convinced that life would change much in Pender, even if it were left occupying land inside the boundary of the Omaha Indian Tribe’s reservation.

The legal issue the Court was exploring was whether Congress, in passing a law in 1882, had actually cut back on the size of the once-vast reservation in northeastern Nebraska, opening a chunk on the west side to settlers eager to begin turning the barren plains green.  Although the Court examined closely the exact language of that 134-year-old law, and explored how one figures out Congress’s intent in such matters, the case seemed to come down to the potential consequences of ruling for the tribe. 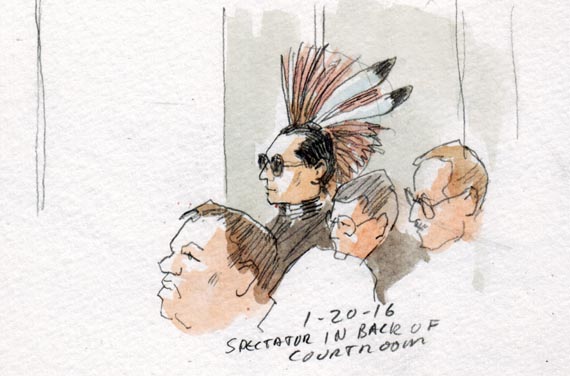 The case got its start when the tribe — with approval of the federal government — decided to regulate liquor sales on the reservation.  They told the liquor outlets in Pender to get a license from the tribe and pay a ten-percent tax on the liquor they sold.  With the state of Nebraska taking the town’s side, the case quickly escalated into a dispute over what remains of the Omahas’ reservation, and whether it still included Pender.   Lower courts concluded that it does, thus upholding the power to tax.

Nebraska sent its solicitor general, James D. Smith of Lincoln, to the Court to argue for the state and for the town.  For a good part of the argument, he had to fend off questions about why the state had not relied upon a Supreme Court precedent that might have a real bearing on what happens to a tribe’s sovereignty when its lands are opened up to settlers.  He tried to claim some reliance on it, but the questions on that persisted. (The precedent was the 2005 decision in City of Sherrill v. Oneida Indian Nation of New York.)

But his real difficulties came when the Justices tried to learn exactly what the townspeople were afraid of.  Justice Samuel A. Alito, Jr., asked: “If the tribe were to go to the outer limits of its authority, what could it do in the city of Pender besides imposing this liquor tax?”  Smith started — and essentially stopped — with speculation that the tribe might try to displace the state’s authority over the environment.

Although other Justices asked essentially the same question, mentioning possible assertions of tribal power, Smith would only respond that the tribe had “not yet” sought to wield additional powers.  Eventually, he did mention the possible conflict of competing police power if there were a scuffle in town between an Indian and a non-Indian.

More generally, Smith said, he feared a flood of litigation out of the “ambiguity” of not knowing which governing authority was in charge in Pender and elsewhere in Thurston County.

Justice Sonia Sotomayor reminded Smith that the tribe “is awfully small,” and asked: “You think they are going to have the power to implement all of these things that you are fearful of?…. Why would they do all of these horrible things?”  He replied: “I don’t think it’s simply the test of what will they do.  I think the issue is once they have the authority, what –”  He was interrupted in mid-sentence by Sotomayor, who pressed him again about failing to rely upon precedent about the loss of tribal sovereignty once they lost their land to other owners.

Smith tried to rescue his case by arguing, in response to a question from Chief Justice John G. Roberts, Jr., that the tribe had used its governing power quite extensively in the eastern part of the reservation — where tribal authority is not being questioned in this case.  The tribe, he said, had not tried to set up an office or schools or run businesses or industries in the western part.

Smith also ran through a string of civil rights that he said the people of Pender would not enjoy if they had to live under the tribe’s powers: they have no vote, they can’t remove tribal leaders from office, they can’t even sit it on tribal public meetings.

Smith, at least, had managed to put the focus on what kinds of authority the Omahas might use, and that set up a series of questions from the Justices to the tribe’s lawyer, Paul D. Clement of Washington, D.C.  But Clement was able to sketch a portrait of a struggling tribe, with limited governing capacity, which it had used in the eastern part of its reservation.  Pressed by the Justices as to what the tribe might do in the western portion, beyond the liquor tax, the tribe’s lawyer focused again on how limited it would have to be.

For example, Justice Anthony M. Kennedy asked: “As a legal matter, if you prevail, can the tribe cast any doubt on the authority and the jurisdiction of the existing municipality?”  Clement replied: “No, not at all.”

When Alito asked what power would be left to Pender to regulate community affairs if it remained located on the reservation, Clement did not directly answer, but then, a moment later, he stressed that tribal power in such an on-reservation community “is so small.”  The tribe’s authority, he said several times, exists mainly over tribal members.

Justice Ruth Bader Ginsburg reminded him that the liquor tax fell on non-Indians in Pender, too, but Clement said that was “the exception that proves the rule,” because “alcohol on reservations has been a unique federal authority for as long as there’s been Indian reservations.”

The third lawyer in the case, Allon Kedem, an assistant to the U.S. solicitor general, focused his argument mainly on the point that Congress, and only Congress, has the authority to cut down the scope of an Indian reservation, and it must do so in a clear and unambiguous way.  But he, too, eventually got around to assuring the Court that not much would change if the Omahas’ reservation boundaries were left as is.  Because the federal government has so much authority to regulate Indian affairs, Kedem said, the tribes basically can do things toward non-Indians only when they have federal permission to do so.

The tone and overall content of the argument was clear by the time the lawyer for the town and for Nebraska got up for a brief rebuttal, and his final plea to remember the expectations that the people of Pender have built up over more than a century ungoverned by their tribal neighbors.