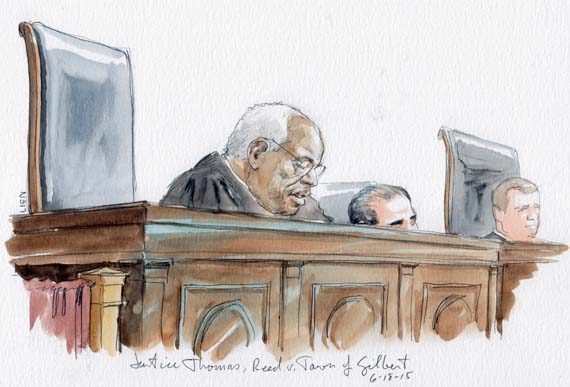 Amid deep divisions on First Amendment theory, the Supreme Court on Thursday gave state governments sweeping new control over the messages that can be put on auto and truck license plates but restricted governments at all levels from using differing rules to control the messages put on billboards and other outdoor signs.

As a combined result of two new rulings, government both gained added power to speak for itself but faced the loss of some of its power to control what others may say in public displays.  And the meaning of the First Amendment, in general, became somewhat more confusing.

The license plate case — Walker v. Texas Division, Sons of Confederate Veterans — and the municipal sign case — Reed v. Town of Gilbert — came out separately on Thursday, and their release on the same day was only a coincidence, not a planned effort to compare or contrast their results.

But they are likely to be analyzed together from here on, to determine how — and whether — they fit into the strong pattern that the modern Court had followed in more or less steadily expanding free-speech rights.  Indeed, in some ways the outcomes seemed contradictory, and the splintering of the Court added to that appearance.

Justice Clarence Thomas, who often goes his own way in solitary opinions, made the difference in both cases.  He joined the five-Justice majority in the license plate case, which cut back on motorists’ right to choose the messages they wanted to convey on their state-issued plates, and he wrote the six-Justice opinion (three other Justices did not formally dissent, but came close) that laid down a broad rule which seemed to put very tight limits on sign ordinances of all kinds if they draw distinctions in the messages.

The First Amendment was not the decisive factor in the license plate controversy.  The Court, dividing five to four, ruled that the messages on those plates are “government speech,” and, as such, the First Amendment imposes no direct curb on the content of that message.

Even so, the Court did leave intact a famous ruling from 1977 (Wooley v. Maynard) declaring that the government cannot force a private motorist to display an “ideological” message that offends him.  That result, however, left the government — after the new Texas ruling — with a wide authority to issue a nearly unlimited kind of messages that it wished to promote. 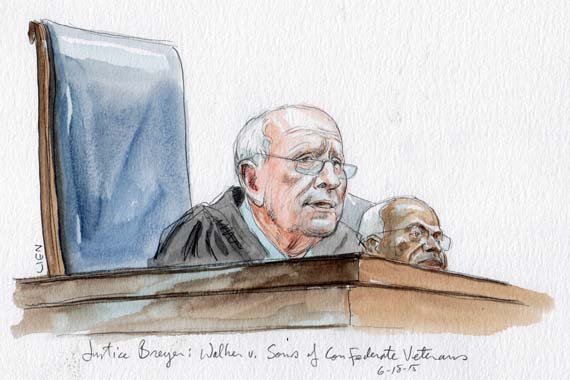 In other words, Justice Stephen G. Breyer wrote for the majority, states have new authority to use “license plate slogans to urge action, to promote tourism, and to tout local industries.”  The state, in running such a program, does not have to match the messages it prefers with messages that it opposed, according to the decision.

The majority likened a state’s program of issuing specialty or “vanity” plates to much the same kind of government activity as choosing which message-conveying monuments to allow in a public park.

Aside from Justice Thomas, the Breyer opinion was joined by Justices Ruth Bader Ginsburg, Elena Kagan, and Sonia Sotomayor.

Justice Samuel A. Alito, Jr., wrote a strongly worded dissent, arguing that people seeing cars and trucks passing by on the roads definitely do not read license plate slogans as the government speaking, given the immense variety of what Texas has allowed to be said on those plates.  The dissent was joined by Chief Justice John G. Roberts, Jr., Anthony M. Kennedy, and Antonin Scalia.

The Thomas opinion in the public sign case was based upon a brand-new theory that, whenever a law addresses different forms of public expression, and treats them differently, it is a form of regulation of the message in each mode, which amounts to discrimination in violation of the First Amendment.  Moreover, the theory requires that such differing treatment be judged by “strict scrutiny” — the most demanding constitutional test.

The main opinion was supported by Chief Justice Roberts and by Justices Alito, Kennedy, Roberts, Scalia, and Sotomayor. But, in a separate opinion by Alito, joined by Kennedy and Sotomayor, those Justices sought to demonstrate how much leeway the Thomas opinion actually left to government at all levels to regulate billboards and other public signs.

The other three Justices did not dissent, but separate opinions — one by Kagan and one by Breyer — read almost as if they were dissents, complaining that the Thomas formulation of discrimination in messages was so sweeping that very few public sign laws, at any level of government, were likely to survive that analysis.

Breyer wrote an opinion for himself, but also joined the Kagan opinion, as did Ginsburg.  Kagan’s writing was clearly intended as the strongest negative statement on the ruling.  She contended that with the test cases that will follow, as lower courts seek to apply the new ruling to sign law after sign law, the Court will “find itself a veritable Supreme Board of Sign Review.”