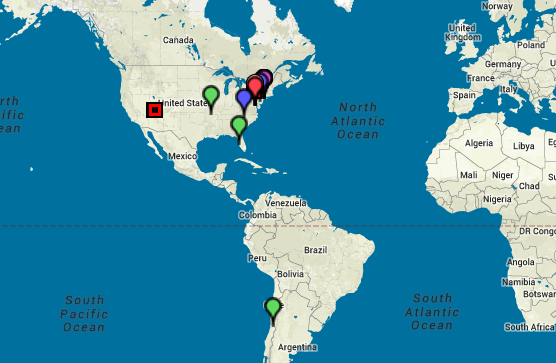 Ever since SCOTUS Map began keeping tabs on the Supreme Court Justices’ events off the bench, Justices Antonin Scalia, Ruth Bader Ginsburg, and Sonia Sotomayor have consistently topped our list for Busiest Justices (measured by the number of events) and Most Frequent Fliers (measured by how far each Justice travels from 1 First Street). In March alone, the trio accounted for sixty-nine percent (nine out of thirteen) of the month’s appearances, which kicked off with Justice Ruth Bader Ginsburg giving remarks at the 2015 Pro Bono Institute Annual Conference in Washington, D.C., on March 5. “[M]ay all who answer the Pro Bono Institute’s call continue to respond to needs outside themselves, to help repair tears in their communities, and to promote in ways best suited to them justice, equal and accessible to all,” Ginsburg told attendees. A transcript of Justice Ginsburg’s speech has been posted online.

On the same day, Justice Antonin Scalia and Bryan A. Garner talked about their book, Reading Law: Interpretation of Legal Texts, at the Newseum in Washington.

A few days later, Justice Scalia was off to Florida, where he was invited to speak at the Ringling College Library Association Town Hall Lecture Series. According to the Sarasota Herald-Tribune, which covered the event, Scalia explained originalism to the audience: “My standard is, what did the text mean to the people to whom it was promulgated? And in most of the controversial cases it is easy to decide that. It really is not hard.” The Justice was presented with a portrait painted by a Ringling College of Art and Design student.

Justice Scalia continued traveling southward, landing at the Universidad de los Andes in Santiago, Chile. As part of the law school’s twenty-fifth anniversary, Scalia gave three lectures on three consecutive days: “The Role of a Judge in Democratic Society” on March 11; “Defending Your Case: The Art of Persuading Judges” on March 12; and “Passion for Service” on March 13. A Spanish-language report on the March 11 lecture can be found here.

Retired Justice Sandra Day O’Connor, meanwhile, was honored with several awards in March. On March 11, O’Connor received the Arizona Region of the American Jewish Committee’s Public Service Award for “sustained contributions to the advancement of equality and democratic principles through work in the nonprofit and public sectors.” The following day, O’Connor was inducted into the Arizona Women’s Hall of Fame as a “Living Legacy.” The Prescott Daily Courier reported on the ceremony.

Also on March 12, Justice Stephen G. Breyer sat down in New York with Noah Feldman for a conversation entitled “The Supreme Court and the Constitution in an Age of Political Partisanship.” The 92Y, which hosted the event, has made the video available.

Justice Sonia Sotomayor, who is always a hit on the college speaking circuit, visited Davidson College in North Carolina on March 12 for a Q&A with students. Sporting a scarf in the college’s official colors of red and black, Sotomayor emphasized the importance of diversity on the Supreme Court: “Every life experience helps in judging. We get cases in every field of human endeavor, so you want justices with broad life experiences, because those are the people you are asking to make the decisions.” DavidsonNews.net and The Charlotte Observer reported on Sotomayor’s appearance, and video of her Q&A is also available.

The following day, Sotomayor traveled back to her home state of New York, where she participated in a discussion of Madison’s Music: On Reading The First Amendment, a new book by Burt Neuborne. The law school has coverage of the event, including video.

On March 16, Justice Sotomayor joined fellow New Yorker Justice Ginsburg for the Eastern District of New York’s 150th anniversary celebration. Justice Ginsburg gave remarks at the event and received a T-shirt from the Eastern District judges that was emblazoned with a riff off of a famous line from the movie A Few Good Men. “You Want the Ruth? You Can’t Handle The Ruth,” the shirt proclaimed. The New York Daily News and the Brooklyn Daily Eagle both reported on the festivities.

Two days later, Justices Ginsburg, Sotomayor, and Elena Kagan were back in Washington, D.C. for a Women’s History Month Reception honoring the female Justices of the Supreme Court. (Justice O’Connor could not attend, but Retired Justice David Souter was in the audience.) House Democratic Leader Nancy Pelosi, who organized the event alongside Representative Cathy McMorris Rodgers, praised the Justices as trailblazers: “Again and again, their command of the law commands our respect. The leadership, the strength, the judgment of these women are an inspiration and challenge to all who would follow in their footsteps.” Video of the reception is available via C-Span.

Finally, on March 29, Justice Samuel Alito served as one of the final-round judges for the Irving R. Kaufman Memorial Moot Court Competition at Fordham Law School.

Justices Scalia and Sotomayor’s dominance of the off-bench calendar continues into April:

Also on April 9, Justice Sotomayor is scheduled to give the New York Public Library Friends Spring 2015 Lecture, where she will discuss her memoir My Beloved World with NYPL President Tony Marx. The event will be livestreamed.

On April 16, Justice Scalia is set to speak at the Arkansas State University – Mountain Home, while Justice O’Connor will give remarks at the Annual Rex Lee & Shawn Bentley Award Luncheon in DC, hosted by the J. Reuben Clark Law Society’s Mid-Atlantic DC Chapter.

The last two events on our April calendar belong to Justice Sotomayor, who will receive the 2015 Katharine Hepburn Medal at Bryn Mawr College on April 17 and serve as a keynote speaker at a April 30 ABA Section of International Law luncheon in Washington, D.C.