No clear answers on same-sex marriage: In Plain English 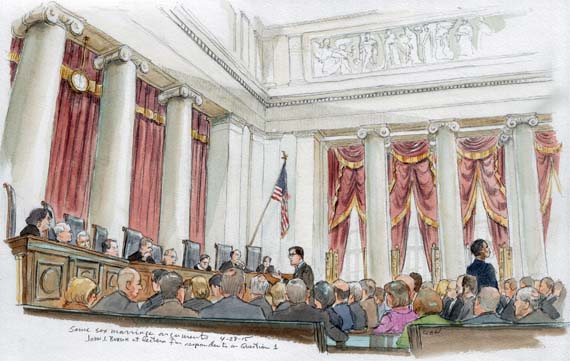 It could turn out to be a nailbiter.  After two-and-a-half hours of oral argument in the same-sex marriage cases, it was not clear where Justice Anthony Kennedy – and therefore the rest of the Court – was headed. Let’s talk about the oral argument in Plain English.

The arguments started with what many people refer to as the “marriage question” – whether the Constitution requires states to allow same-sex marriages.  Representing the same-sex couples challenging the state bans, Mary Bonauto ran into tough questions from Chief Justice John Roberts and Justices Samuel Alito and Antonin Scalia.  Roberts suggested that adopting Bonauto’s position would “redefine” marriage, adding that “every definition I looked up until about a dozen years ago” defined marriage as a union between a man and a woman.  The plaintiffs could not have been encouraged when Justice Anthony Kennedy, who is probably their best bet to join the Court’s more liberal Justices to strike down the bans, echoed this idea.  He told Bonauto that the traditional definition of marriage has been around for millennia, but it has only been a little over a decade since the Court held that Texas could not criminalize sex between two consenting adults of the same sex.  That may be a long time for scholars, he pointed out, but it isn’t very long compared to the big picture, and “it’s very difficult for the Court to say we know better.”

Two other members of the Court’s conservative bloc, Justices Samuel Alito and Antonin Scalia, also left little doubt that their sympathies lay with the states.  Like the Chief Justice, Alito reminded Bonauto that, until the end of the twentieth century, there weren’t any countries that allowed same-sex marriages.  And later he expressed concern about whether ruling for Bonauto’s clients might require states to allow other kinds of marriages – such as a marriage between two men and two women.  Scalia framed the question before the Court much as the states had in their briefs, telling Bonauto that the “issue is who should decide?  You are asking us to decide for this society when no other state has had [same-sex marriage] until 2001?”

Arguing on behalf of the federal government in support of the plaintiffs, U.S. Solicitor General Don Verrilli faced a similar barrage of questions from the Court’s more conservative Justices during his fifteen minutes at the lectern.  In particular, Justice Kennedy reminded Verrilli that in an earlier case, the Court had indicated that it should define a “fundamental right” in “its narrowest terms” – a precedent that would not necessarily bode well for the plaintiffs.  What, he asked Verrilli, should the Court do about that rule in this case?  As he had during Bonauto’s argument, Justice Scalia then suggested that the Court should leave the issue for “the people” to decide, but Verrilli countered in his final remarks that the plaintiffs in the case deserve to have their constitutional rights now, without being required to wait to gain public support.

John Bursch, the former solicitor general of Michigan, represented the four states.  He began by emphasizing what was not before the Court:  whether the four states were “ready” for same-sex marriage.  The question, he made clear, was who gets to decide whether the states must allow same-sex marriages.  And he asked the Court to uphold a different right:  the voters’ “individual fundamental liberty interest” to define the meaning of marriage.

Bursch spent most of his oral argument time sparring with the Court’s four more liberal Justices – Breyer, Ginsburg, Kagan, and Sotomayor – about the states’ rationale for prohibiting same-sex marriage.  Bursch maintained that the states were not limiting marriage to opposite-sex couples because they wanted to confer second-class status on same-sex couples, but because of society’s vision of marriage as an institution centered around having children and encouraging parents to stay married and bonded to their children.  The idea that marriage is about love and commitment is important, he said, but the state doesn’t have any interest in that idea.  All four of the more liberal Justices seemed highly skeptical of his justifications.  How, Justice Ginsburg asked, does allowing same-sex marriage take anything away from opposite-sex couples?  Being married, Justice Sotomayor pointed out, doesn’t stop parents from getting divorced and abandoning their children.  Justice Breyer chimed in, observing that a “very high percentage” of opposite-sex couples don’t have children, while a similarly high percentage of same-sex couples do.

Significantly, Justice Anthony Kennedy at times also seemed dubious of the states’ argument.  Even if same-sex couples can’t have biological children together, he posited, they might still want the other benefits that come with marriage.   Like his more liberal counterparts, he also appeared to question Bursch’s assertion that allowing same-sex marriages would harm opposite-sex marriages, as well as the contention that only opposite-sex couples can bond with their children.

Arguing on behalf of the challengers in the case, Douglas Hallward-Dreimeier emphasized that the states’ refusal to recognize same-sex marriages is a “stark departure” from the general practice of recognizing virtually all marriages.  This argument seemed to find some traction with the Chief Justice, who asked Joseph Whalen – arguing on behalf of the states – when his home state of Tennessee had last declined to recognize a marriage in another context besides same-sex marriage.  The answer?  1970, in a case involving a stepfather who had married his stepdaughter.  But at another point, the Chief Justice suggested that, given how mobile our society is these days, requiring states that don’t allow same-sex marriage to recognize same-sex marriages from other states would mean that “one state can basically set policy for the entire nation.”

So where does this leave us?  Once again, it may all come down to Justice Kennedy, and he didn’t tip his hand during his questions and comments in the first part of today’s arguments.  Kevin Russell, who contributes frequently to this blog, has suggested that the Chief Justice’s questions during the second part of the oral argument could be part of an effort to broker a compromise, in which the Court rules that there is no right to same-sex marriage but still gives the plaintiffs much of what they are seeking by requiring states to recognize same-sex marriages that happen somewhere else.  Notably, however, Justice Anthony Kennedy was quiet during the arguments on the recognition question.  Does that silence mean that he had already decided to rule for the plaintiffs on the first question, eliminating any need to worry about the second one?  His colleagues will know the answer later on this week, when they meet to vote on the case.  We won’t know until the Court issues its decision in late June, but when we do we will be back to report on it in Plain English.