Yesterday, the Supreme Court heard oral arguments in the much-anticipated immigration case of Kerry v. Din. In that case, the U.S. government – in the face of strong academic commentary to the contrary — steadfastly defends the doctrine of consular non-reviewability and its bar to the judicial review of visa decisions of Department of State consular officers.

A consular officer had denied the visa application of Kaniska Berashk, a citizen of Afghanistan and the spouse of Fauzia Din, a U.S. citizen. The consular officer’s denial merely cited the broad definition of terrorist activities in the immigration statute. Din sought judicial review of her husband’s visa denial. The U.S. Court of Appeals for the Ninth Circuit allowed her that review and found that the consular officer’s explanation of the visa denial was insufficient. 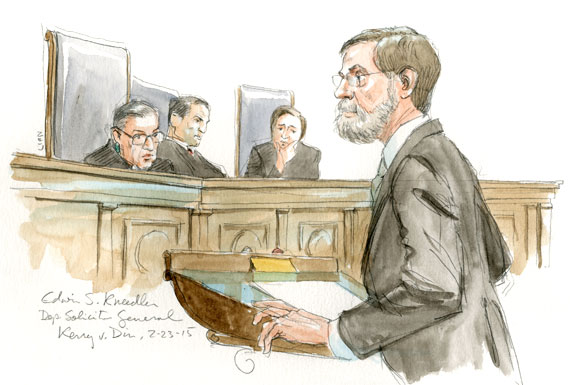 Office of the Solicitor General veteran Ed Kneedler argued the case for the United States. Relying heavily on much-criticized Cold War cases of Knauff v. Shaughnessy and Shaughnessy v. United States ex rel. Mezei and frequently invoking the need to protect the national security, Kneedler argued that the U.S. government has the undisputed power to exclude aliens from the United States and that “[o]ur position is that there is no judicial review” in the case of the denials of immigrant visas by consular officers. Kneedler later elaborated: “This Court has said on a number of cases that when it comes to the exclusion of aliens, whatever process Congress provides is the process is due.” At one point in the argument, Justice Ruth Bader Ginsburg pressed Kneedler into conceding that the U.S. government’s position was that there is no exception to the consular non-reviewability doctrine. Jarred by the government’s absolutist approach, Justice Stephen Breyer asked whether a consular official could, for example, deny a visa for racially discriminatory reasons or because he thought husbands and wives should not live together. The answer apparently was “yes.”

Justices Sonia Sotomayor, Elena Kagan, Breyer and Ginsburg seemed sympathetic to Din’s case. Among other things, these Justices feared possible erroneous denials of visas with no opportunity for correction through judicial review. Justice Sotomayor characterized the administrative process after the denial of a visa to a spouse as an “administrative nightmare.”

Justices Sotomayor and Breyer (and to a certain extent Justices Anthony Kennedy and Justice Samuel Alito) were also troubled by the possibility of uncorrected mistakes by the government. When Kneedler assured the Court that the decisions were double-checked before denying a visa, Justice Sotomayor countered that “that’s what we were told after September 11th,” noting that the government had claimed that it had good reason for arresting and detaining foreigners, only to later admit that some alleged terrorists had been “erroneously identified.”

The Justices generally seemed sensitive to the possible national security concerns at stake. A number of questions focused on the practicalities of judicial review if the government claimed that disclosure of the basis for the visa denial might jeopardize national security. (The U.S. government did not make this argument in Din’s case.). One of the possibilities mentioned would be for in camera review by the judge.

At various times in the argument, the Justices asked questions about how Kleindienst v. Mandel applies to the case at hand. In that case, the Court ruled that a court could review the claim of a group of U.S. citizens who asserted that the exclusion of a Marxist journalist violated their First Amendment right to hear him speak. The Court found that the basis offered – that the applicant had violated the terms of visas on previous visits to the United States – was a “facially legitimate and bona fide reason” for the executive action. Justice Kennedy, the possible swing vote in the case, seemed to agree with Justices Ginsburg, Breyer, Sotomayor, and Kagan that, under Mandel, Din has the right to demand an explanation for the visa denial.

Kneedler attempted to distinguish Mandel as involving a different decision than a visa denial. As a back-up argument, he claimed that a citation to the statute was sufficient to satisfy the deferential requirement of a facially legitimate and bona fide reason for the visa denial. 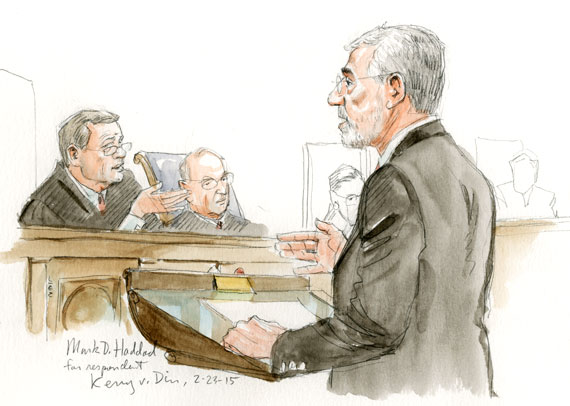 Mark Haddad of Sidley Austin LLP argued the case on behalf of Fauzia Din. While appropriately conceding that Congress has broad authority over immigration, he urged the Court to affirm the Ninth Circuit’s conclusion that Mandel required a further explanation of the visa denial.

Much of the Justices’ questioning of Haddad focused on the scope of Din’s constitutional rights. Chief Justice John Roberts and Justices Antonin Scalia and Alito worried about the prospect that the right to contest immigrant visa denials would be extended to relatives. They seemed wary of encouraging spouses and other family members to seek judicial review when their relatives are barred from entering the United States.

In this vein, several of the Justices raised the question whether, if the Court ruled in Din’s favor, a wife might hypothetically be able to challenge a criminal conviction even if her husband for whatever reason did not want to do so. However, if permitted by the case law, that issue could be addressed by allowing the visa applicant himself to seek judicial review. In this case, the decision was made to pursue judicial review based on an opening left by Mandel allowing a U.S. citizen to challenge the denial.

Another practical concern of some of the Justices was whether there might be a flood of appeals of visa denials if the Court were to allow judicial review of consular officer decisions. That relatively few cases have been appealed under Mandel, and in the Ninth Circuit where some kind of judicial review is currently permitted, suggests that there would not be a flood of appeals if the Court decided in Din’s favor.

Although always hazardous to predict a decision in a case based on the oral argument, it seems to me that the Justices are closely divided on this case. As frequently is the case with the Roberts Court, Justice Kennedy will perhaps determine the precise outcome.

Based on the argument, my prediction is that the Court will embrace the deferential Kleindienst v. Mandel framework. However, it is far from certain whether the Court will find that the denial in this case satisfied the facially legitimate and bona fide requirement.